WHERE THE PAGER TAKES US - WINTER SPECIAL - Sunday 6th January 2013 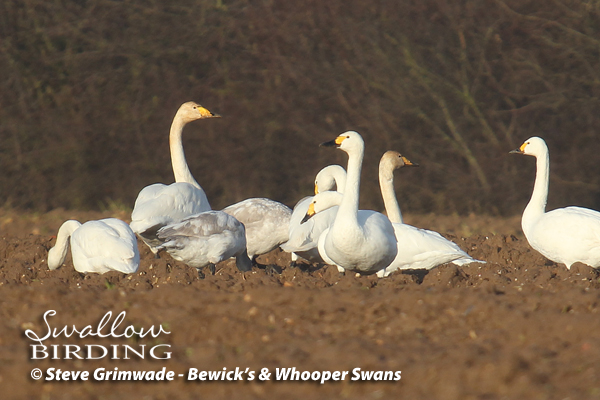 After a breakfast stop we started the day at North Warren RSPB reserve where large numbers of geese were present with EUROPEAN WHITE-FRONTED, BARNACLE, GREYLAG, three feral RED-BREASTED GEESE and a 1st winter RED-BREASTED GOOSE that is considered wild. A first year female MERLIN gave excellent views as it perched on a post. From here we drove a short distance to a harvested sugar beet field where four WHOOPERS and 20 BEWICK'S SWANS were feeding. In the surrounding area were good numbers of CHAFFINCH in the hedgerows.

Heading north we arrived at Lowestoft, going straight to Hamilton Dock and after a little searching located the juvenile GREAT NORTHERN DIVER as it swam around the dock. Two SANDERLINGS and some TURNSTONE were seen around the area. Moving on to Ness Point, we quickly found around nine PURPLE SANDPIPERS roosting in two groups on the rocks. Offshore, several RED-THROATED DIVERS flew past heading south.

Then we drove on to Lake Lothing where the first bird we saw was a SHAG on the water and a scan of the area produced at least five more and a GUILLEMOT which was a pleasant surprise. With our stomachs starting to rumble, we made our way to a lunch stop in the Waveney Forest. Once our hunger was satisfied, we walked through the woods to the watchpoint and out on the marsh, a few MARSH HARRIERS were seen and it didn't take long to locate the ROUGH-LEGGED BUZZARD perched on a distant fence post. Eventually this flew around and made several sorties down on the ground. Two SHORT-EARED OWLS flew about, one mobbing a MARSH HARRIER. A LITTLE EGRET flew past but this was eclipsed by a stunning GREAT WHITE EGRET which flew the opposite way before landing on the marsh. A few KESTRELS were noted as well as a perched male PEREGRINE. In the woodland, small parties of LESSER REDPOLL and SISKINS flew over and in the pines were plenty of COAL TITS and GOLDCRESTS. After this bird spectacle, the mist started to descend on the area so we made a quick retreat.

Taking a gamble, we opted to head to Hickling Broad to see the raptor roost and after walking along the track, reached the watchpoint to see several MARSH HARRIERS and a BARN OWL flying over the fields. Then suddenly the fog descended with visibility no more than 100 feet. This was quite frustrating, especially as we could hear the bugling calls of COMMON CRANES overhead but couldn’t see them!

As we concluded the day, a COMMON BUZZARD was seen perched in a roadside tree in the gloom, rounding off a great day of birding.
Next
Previous