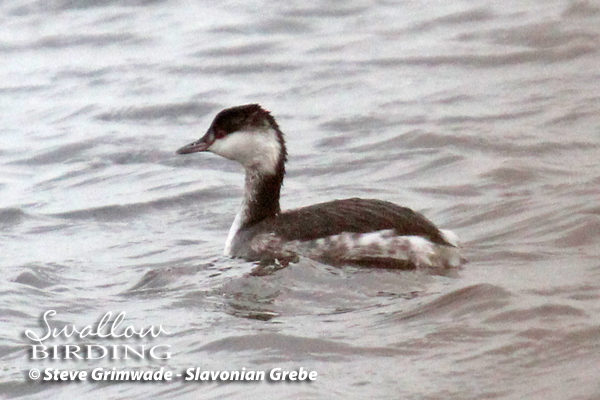 With poor weather forecast for the day we made our way to Dungeness in good time and immediately headed to the area around the fishing boats. With an incoming tide and strong onshore wind there were literally hundreds of birds in the bay. The vast majority of these were GUILLEMOTS in varying degrees of plumage from winter to full summer. A few RAZORBILLS were seen flying to and thro over the waves. Good numbers of GANNETS, KITTIWAKES and plenty of BRENT GEESE were heading northwards. A small party of COMMON SCOTER flew past, as did an adult MEDITERRANEAN GULL just offshore. By now rain was starting to fall quite heavily, but this did not deter us as we found a couple of RED-THROATED DIVERS close by.

Moving on to the ARC pit, a MERLIN was seen briefly adjacent to Bolderwall Farm as was a single TREE SPARROW which promptly disappeared after the falcon flew through. As we wandered along the path, a GREAT WHITE EGRET flew past and away to New Diggings. From the hide were quite a few ducks including GOLDENEYE, but strong winds kept most of them hidden from view. Two MARSH HARRIERS flew over the reedbeds and with time getting on, we walked back to the carpark getting much better views of the TREE SPARROWS. Driving past a few minutes later, the flock numbered around 30 birds.

Another GREAT WHITE EGRET flew over the shingle and a little further on, one was seen skulking in the reedbeds. After a warming lunch in the visitor centre, we visited several of the hides. Good numbers of SHOVELER and PINTAIL were seen and an unmentionable duck was noted! Moving on to the next area of pools, we had excellent views of a SLAVONIAN GREBE which dived repeatedly in front of us. On Dengemarsh, a large flock of WIGEON fed and in the reeds we found yet another GREAT WHITE EGRET.

With an hour or so of remaining light available, we drove along the road stopping close to the ARC pit. The first bird we saw was a BITTERN wandering around a sheltered bay, which then slowly walked into the reedbed. A redhead SMEW was also seen amongst the many other ducks and guess what, another GREAT WHITE EGRET flew past going to roost.

Our last stop was back on the beach looking for the reported Glaucous Gull but despite a thorough search by us and a group of Kent birders it wasn't seen. With rain falling pretty steadily, we called it a day and as we got a bit further on, the shout went up GLAUCOUS GULL! Ian had spotted it amongst the many other gulls but unfortunately, they all flew towards the sea where the light was too gloomy. Nonetheless, it had been a cracking day despite the weather.
Next
Previous