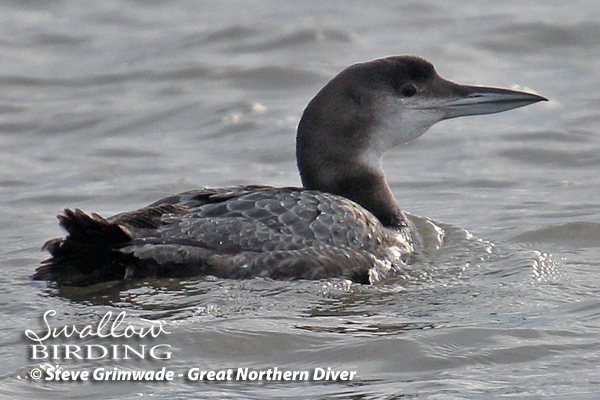 We met at West Mersea ready for our 9.30am start to find the wind had dropped significantly from the previous day. Having left the quay for just 5 minutes, we were treated to a flyby of RED-BREASTED MERGANSERS and then fantastic views of an adult GREAT NORTHERN DIVER close by. This magnificent bird came up 3 feet from the boat before quickly diving again!

As we entered Salcott Channel, a winter plumaged BLACK-NECKED GREBE was seen and further along a small group of male RED-BREASTED MERGANSERS displayed to some females. A couple of MARSH HARRIERS flew over Old Hall Marshes RSPB reserve as we left the channel. A quick look in Tollesbury Channel produced a small flock of AVOCETS as well as some GOLDENEYE. Moving out into deeper water we spotted another GREAT NORTHERN DIVER, 3 SLAVONIAN GREBES and good numbers of CORMORANTS. Cruising westwards brought us more SLAVONIAN GREBES with our total now for the trip reaching 11 birds.

Off Rolls Farm, a female EIDER bobbed around and was seen later in with a flock of GOLDENEYE. Eventually we began seeing RED-THROATED DIVERS and enjoyed great views as a couple flew past. Nearing Goldhanger were a small flock of COMMON SCOTER, comprising of female/juveniles and offering superb views as they cruised past. A real highlight was locating a wintering flock of 5 VELVET SCOTER, which flew close to the boat before pitching down near to the mussel beds.

Moving round to the south side of Osea Island, was much more sheltered from the biting north-easterly wind and proved to be beneficial, as close to the entrance of Maylandsea Creek were three Swans. On sailing closer we could confirm these to be 3 BEWICK'S SWANS, a scarce bird in the county this winter.

Starting the return journey back to Mersea, we stopped to appreciate the VELVET SCOTER again and further along the river were a feeding frenzy of CORMORANTS with several RED-THROATED DIVERS close by. As high tide approached large areas of saltmarsh became covered, encouraging the beautiful sight of hundreds of KNOT to take to the air. Close to Mersea we found both adult and first-winter GREAT NORTHERN DIVERS and the BLACK-NECKED GREBE originally seen, still in the same place and rounding off a fantastic trip.
Next
Previous