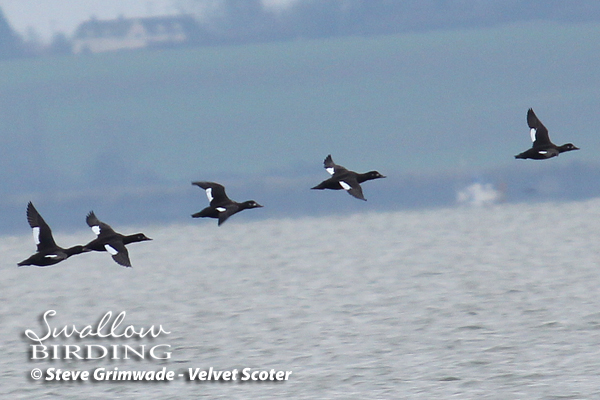 We met at 10.40am for our boat trip out onto the River Blackwater and despite overnight snow, the conditions were bright and very, very cold. As we left the moorings, a few LITTLE GREBES dived amongst the fishing boats and plenty of DUNLIN fed along the shoreline. As we left the shelter of Mersea it got pretty breezy with a biting cold northerly wind. In the shelter off Old Hall Marshes RSPB we located the wintering BLACK-NECKED GREBE that had been in the area since 21st November 2012. Small parties of GOLDENEYE and RED-BREASTED MERGANSER bobbed in the choppy waters with a few GREAT CRESTED GREBES. Waders were aplenty with GREY PLOVER, KNOT, DUNLIN, RINGED PLOVER and BAR-TAILED GODWITS noted.

Motoring westwards we picked out some RED-THROATED DIVER flying low over the water and on reaching Rolls Farm, a female EIDER was seen with a few GOLDENEYE. Close by a SLAVONIAN GREBE was found with a small flock of GREAT-CRESTED GREBES and a good comparison of the species was made.

Arriving at the east end of Osea Island, it didn't take long before we found a flock of COMMON SCOTER. These had five VELVET SCOTER with them, which flew by giving great views. Whilst waiting for the tide to rise sufficiently to get us over the Osea Island causeway we circled the area, once again seeing the two species of Scoter in flight and on the water.

Due to the brisk northerly, we opted to go round the south side of Osea Island as it would be more sheltered and this helped. Entering Mayland Creek, a good flock of around 500 KNOT flew past the boat affording brilliant views. With high tide approaching, we rounded the west end of Osea Island and had good views of two SLAVONIAN GREBES and a little further on, another four were seen together. The VELVET SCOTER were still present and in the sheltered creeks on the north side were good numbers of RED-BREASTED MERGANSERS and GOLDENEYE.

Moving slowly along, quite a few more SLAVONIAN GREBES were seen as well as RED-THROATED DIVERS moving with large numbers of feeding CORMORANTS. A female MARSH HARRIER flew over the river towards Rolls Farm and later, a few were seen over Old Hall Marshes.

After spotting more SLAVONIAN GREBES, we checked out the area close to West Mersea for Great Northern Divers but to no avail. Arriving back in West Mersea, we were grateful to get ashore and warm up hands and feet after what had been another fantastic boat trip!
Next
Previous