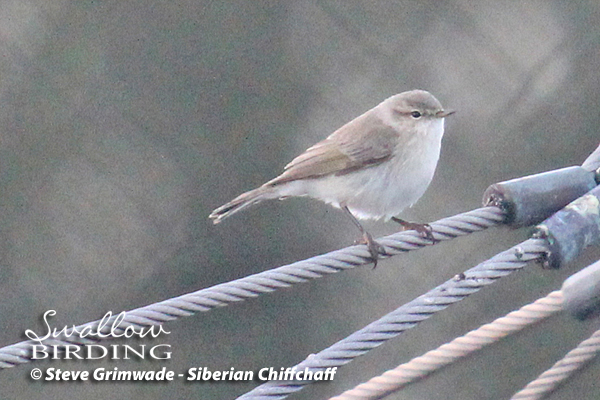 Friday
Our tour down to Cornwall got underway with an early start from Essex and once we had left the traffic of the M25, the journey was pretty easy. Birds of note along the way included two RAVEN and quite a few COMMON BUZZARDS. Arriving in Exeter just before noon, we had a comfort stop and then drove the short distance to Exminster. On arrival we wandered up a lane and met another birder who had been looking for the recently present Rose-coloured Starling albeit unsuccessfully.

After a look in the churchyard which produced three lovely BRAMBLING as well as the commoner finches, we eventually managed brief flight views of the 1st winter ROSE-COLOURED STARLING. We managed to see it again and this time had good views, as it sat on the edge of a bush before creeping inside for shelter. When we turned our backs it flew away!

Moving on southwards, we headed towards the coast and by now there was quite a drizzle in the air, but this did not stop us seeing up to 12 CIRL BUNTINGS including a superb male at close range. Other species in the area included CHIFFCHAFF, GOLDCREST and several SONG THRUSH. Carrying on westwards, we stopped off close to Plymouth to look for a reported Lesser Yellowlegs but by now, the weather had taken a turn for the worse and the rain was falling very heavily. Despite this, we found three GREENSHANK, SPOTTED REDSHANK and plenty of COMMON REDSHANK.

Eventually arriving at our hotel after a gruelling drive through very heavy rain, we checked in and were relieved to have a hot shower before a very enjoyable meal.

Saturday
Waking to fine sunny conditions, we enjoyed a hearty breakfast and loaded up the van, driving westwards towards Penzance. Our first stop was at the Jubilee Pool where we soon found PURPLE SANDPIPERS foraging with TURNSTONES amongst the seaweed. Offshore, two female COMMON SCOTER were seen and a fine drake EIDER bobbed around on the shoreline. Frequent scanning of the bay yielded dividends with two BLACK-THROATED and a single GREAT NORTHERN DIVER and five more COMMON SCOTER, also good numbers of CORMORANTS and SHAGS.

With the light good and winds moderate, our next destination was Newlyn and after parking up we wandered around Sandy Cove where the conditions proved great for CHIFFCHAFF and GOLDCREST. ROCK and MEADOW PIPITS flicked around on the beach and a GREY WAGTAIL showed well on nearby roofs. Out in the sheltered waters a juvenile GREAT NORTHERN DIVER swam by and a RAZORBILL fed close in. A BULLFINCH sat out in the open in the Buddleia scrub at the back of waste ground. A local birder informed us of a MARSH HARRIER circling over the bay which was quite unexpected and a wander to the harbour proved beneficial when a BLACK-NECKED GREBE gave good views around the fishing boats. On the nearby beach, two adult MEDITERRANEAN GULLS were loafing on the tideline.

With things going well we drove northwards to Pendeen Lighthouse and offshore were good numbers of FULMAR, GANNET, a few KITTIWAKE and three GUILLEMOTS. Nearby at Treen Common a small flock of Lapland Bunting had been seen recently but after speaking to a local birder on site we found out they were very elusive and could only be seen when flushed. With this being far from ideal we decided to move onwards, although we did have good views of a hunting PEREGRINE over the fields.

A stop was made in Hayle for facilities and of course, a Cornish Pasty and later we wandered over to the estuary in the hope that the incoming tide would push birds in. Hundreds of TEAL and WIGEON were present and four female GOOSANDER were a great find. Waders included CURLEW, BAR-TAILED GODWIT, REDSHANK, GREENSHANK, RINGED PLOVER, LAPWING and DUNLIN.

Liz struck gold after the perseverance of scanning a gull flock with the discovery of a second winter ICELAND GULL and although distant, good views were had. Another unusual bird to the area was a summer-plumaged COMMON TERN, seen distantly over the river mouth. We decided to drive round to the area and eventually found the COMMON TERN flying up and down the river.

With the tide coming in fast, we went to a nearby spot overlooking Carbis Bay. A single GREAT NORTHERN DIVER was spotted and a RAVEN gave a good close flyby. Once again perseverance paid off with at least two BALEARIC SHEARWATERS with lots of GANNETS. By now, the rain had started so we made a visit to Marazion Marsh but the light was dropping rapidly. New birds included SANDERLING, LITTLE GREBE, MOORHEN and COOT before we admitted defeat and headed back to base.

That evening we all met in the bar for a welcome drink before dinner, which was enjoyed.

Sunday
We opted for an earlier breakfast for our last morning in Cornwall and upon loading the vehicle with our luggage, drove the short distance to Helston boating lake, where several species of duck were present including SHOVELER and plenty of TUFTED DUCKS. Two of the group stayed in the van, whilst the rest wandered over to the sewage works and were treated to good numbers of COMMON CHIFFCHAFFS as they flitted around the tanks. We located two SIBERIAN CHIFFCHAFFS amongst them and at one time had both types side by side for excellent comparison of both plumage and calls. GOLDCRESTS flitted in the Ivy and PIED WAGTAILS and a single GREY WAGTAIL were seen.

The mobile rang with news that the two members of the group remaining in the van had just seen a SHORT-EARED OWL fly past, but by the time we got back there was no sign. Back at the sewage works we spent more time watching the warblers and checking out an area of scrub. This yielded a couple of REDWING and a stunning FIRECREST which flitted around a Buddleia.

With time at a premium, we drove eastwards to Stithians Reservoir and despite signs saying the road was closed, we got down to the causeway OK. Small numbers of wildfowl were present, although most were sheltering from the gale force westerlies! GOLDENEYE, POCHARD, GADWALL, TUFTED DUCK and a few TEAL were found and after a good search of the reservoir, Andrew A found the 1st winter male LONG-TAILED DUCK to the north of the causeway. Despite being distant and frequently diving, we had quite good views.

Our next port of call was Colliford Lake on Bodmin Moor and it didn't take long to find the long-staying drake LESSER SCAUP as it consorted with TUFTED DUCKS. The strong winds continued to make things rather unpleasant and it was a job to hold the scope steady. With us finding the bird quickly, we decided to drive to nearby Siblyback Lake. This took longer than expected, but eventually we reached our destination and after making use of the facilities, we found a female RING-NECKED DUCK with TUFTED DUCK and again, though distant, all the distinguishing features could be seen.

With birding time coming to an end, we started our journey eastwards noting several large flocks of LAPWING and GOLDEN PLOVERS as well as the usual COMMON BUZZARDS along the way.

It had been a superb weekend of birding with many unusual and scarce birds seen during our stay and with sunny, mild weather for most of the time.
Next
Previous