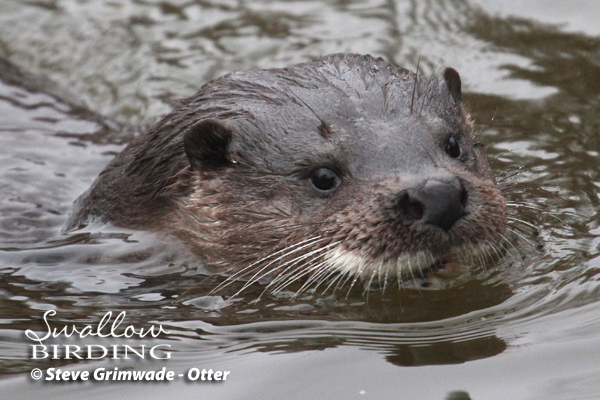 An amazing day began when close to Witham a TAWNY OWL flew across the road in front of us. After a stop for refreshments, we drove to Thetford and soon found the long-staying BLACK-BELLIED DIPPER feeding in a stream, giving excellent views as it fed and swam close by.

We then wandered back towards the van along a different path, finding MARSH TIT and GOLDCREST, but taking a slight diversion we found a superb male KINGFISHER perched in bushes before the real stars of show came out to play. Over the next forty minutes, we had the most amazing views of a mother and cub OTTER feeding right in front of us and down to distances of three feet! In fact, they were so close, you could hear them crunching food.

Everyone enjoyed views that we had only dreamt about and really didn't want to leave our grandstand position, but with time getting on we needed to get to the north coast.

Eventually we reached Hunstanton, where a quick stop was made to watch a couple of FULMARS gliding across the cliffs before we drove on to Titchwell RSPB reserve. Around the visitor centre we had good views of small numbers of BRAMBLING in with the common finches before we walked out towards to sea. A WATER RAIL fed in the ditch and the adjacent fields held a large flock of DARK-BELLIED BRENT GEESE along with CURLEW, RUFF and GOLDEN PLOVER.

Heading straight to the sea proved to be a good choice, as the beach was alive with around 10,000 gulls of which most were either BLACK-HEADED or COMMON GULLS. A small flock of distant passerines looked interesting so we strolled westwards towards Thornham and eventually had good views of a mixed flock of GOLDFINCH and around 15 TWITE as they fed in the sand dunes. Offshore were around 2000 COMMON SCOTER moving in several large flocks.

With our stomachs rumbling, we went back for lunch and afterwards wandered towards the centre finding REDWING and two female BULLFINCH. Our first stop was overlooking Patsy's Reedbed where we failed to find the female Red-crested Pochard. Back along the main path, a small crowd were looking over the marsh and while we headed to the Parrinder Hide, Andrew saw that they were watching a female LONG-TAILED DUCK, on a small pool on the saltmarsh. When we were around thirty seconds away, it flew out to sea!

We walked back to the hide and spent some time watching the good numbers of gulls and wildfowl close to the hide. A WATER PIPIT foraged along the edge with a group of PIED WAGTAILS and scanning over the reedbeds produced a MARSH HARRIER and two ringtail HEN HARRIERS. With the light dropping we left the hide and another scan of the reeds produced a BITTERN flying over the reedbed and further along, a male HEN HARRIER, a BARN OWL and another BITTERN was seen!

The excellent day concluded with yet another TAWNY OWL flying over the road near to Sandringham.
Next
Previous