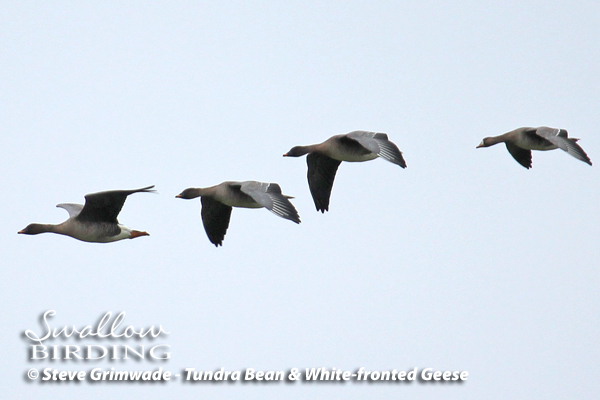 The day began with a breakfast stop to sustain us through the morning in what were very cold conditions. Our first destination was Wrentham where we searched for a wintering Great Grey Shrike but during the first hour of our visit it hadn't been seen. We did however get good views of two BARN OWLS hunting the rough grass fields in front of us. A little while later, a few Norfolk birders located the Shrike sitting on wires and a five minute walk and a little searching, produced the GREAT GREY SHRIKE on the wires briefly before flying off. Three BULLFINCH flew from the hedgerows and two WOODCOCK were flushed from a pine copse.

By now we were cold so back to the van for a warm up before driving to Southwold Harbour. After a short walk we were watching a superb flock of 30 TWITE feeding on the saltmarsh and flying down to drink and bathe in some puddles by the sea wall. Also in the area was a large herd of around 50 BEWICK'S SWANS and a good selection of geese including BARNACLE, WHITE-FRONTED and best of all, four TUNDRA BEAN GEESE that gave several good flypasts with a WHITE-FRONTED GOOSE for ID comparison.

With lunch time approaching we drove down to Westleton Heath where brief respite from the icy wind was very welcome. After lunch we checked out the Heath for any sign of DARTFORD WARBLERS but despite possibly seeing one, we just had to make do with various churring calls. We dropped into Minsmere for a much-deserved hot drink and slice of cake which almost made us want to stay in the warmth of the tearoom! On the feeders around the centre and wardens area we found NUTHATCH, MARSH TIT and good numbers of COAL TITS taking advantage of the food.

A walk was taken down to South Scrape, where two female SMEW were seen before flying off but little else was noted due to high water levels. The remainder of the afternoon was spent in Island Mere Hide with the walk there producing SISKINS and from the hide we had scope views of a male SPARROWHAWK perched on posts. As the light dropped, up to 10 MARSH HARRIERS were seen over the reedbeds and a BITTERN flew slowly west at the back of the pool. A BEARDED TIT flew in front of the hide whilst several WATER RAILS squealed from the dense reeds and Alder Carr.

Not far from Minsmere, we flushed another WOODCOCK from the trees. Despite very trying conditions we enjoyed a good day with a good selection of goodies seen.
Next
Previous