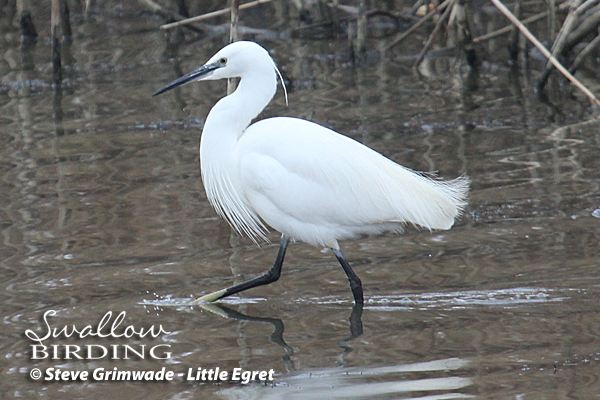 Despite the poor forecast, we enjoyed a good day in England's smallest county. With over 30 hides to choose from, there was always plenty of places to shelter! From the Anglian Birdwatching Centre we located good numbers of common wildfowl, whilst a male SPARROWHAWK sat on a fencepost eyeing them up. We decided to walk northwards to the hides overlooking lagoon 3 and this was very productive with 4 GREEN SANDPIPERS feeding with a small flock of DUNLIN as well as up to 11 SMEW including several smart males and 6 SCAUP.

With a supporting cast of GOLDENEYE, REDSHANK, EGYPTIAN GOOSE and LITTLE GREBES we were doing quite well. The next hide overlooked the main part of the reservoir but apart from a good number of GOLDENEYE including some displaying males and a distant RED KITE it was rather quiet. An odd white-headed LAPWING was seen from the Sandpiper Hide as well as RINGED PLOVER and a pair of OYSTERCATCHER. Several species of fungi were noted along the paths and on trees including TURKEY TAIL, HAIRY CURTAIN CRUST and SMOKY BRACKET. After a spot of lunch in the warm visitor centre, we wandered to new lagoons south of the visitor centre.

With steady drizzle falling we visited several new hides noting more RINGED PLOVER, CURLEW, 2 GOOSANDER, 2 COMMON BUZZARDS and some COMMON SNIPE. We spent more time in the visitor centre enjoying cake and coffee and from here we watched an adult YELLOW-LEGGED GULL and two BARN OWLS frequenting grassy fields at the back of the lagoon. With a little time to spare we checked out the north arm but apart from plenty of BLACK-HEADED GULLS it was pretty quiet.
Next
Previous