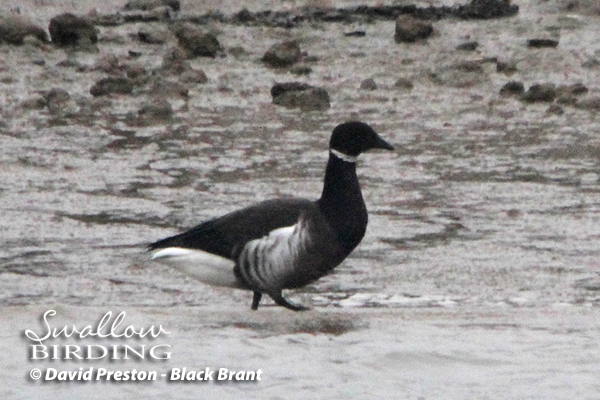 A great day out on the Blackwater despite bitterly cold winds. We began by finding a stunning BLACK BRANT along the Mersea shoreline and shortly after we had stunning views of two SHAGS including a stunning adult with a full crest.

Moving along the north shore, we picked out COMMON SCOTER and SLAVONIAN GREBE amongst the very numerous GREAT CRESTED GREBES. A few MARSH HARRIERS hunted along the sea walls and on reaching Tollesbury Channel, we discovered three EIDER including two males. Two RED-THROATED DIVERS were seen, one in flight and one close to the boat but the real highlight was the discovery of six VELVET SCOTER after the absence of a few weeks. RED-BREASTED MERGANSER along the river numbered at least 100 which were good to see.

Trying to best to reach some sheltered waters yielded dividends with three BLACK-NECKED GREBES on the southern shore of Osea Island and the entrance to Mayland Creek produced a female PEREGRINE perched on a post eating what looked like a duck. In the creek itself, hundreds of KNOT wheeled around as the tide covered the marsh.

It was decidedly nippy back on the northern side, as well as choppy but this didn't bother us as the birds were so good! Amongst a small party of COMMON SCOTER was a cracking female LONG-TAILED DUCK! As there was a boat race taking place off Mersea and it had begun to disturb the birds, we headed back to shore after what had been a fantastic morning’s birding.
Next
Previous