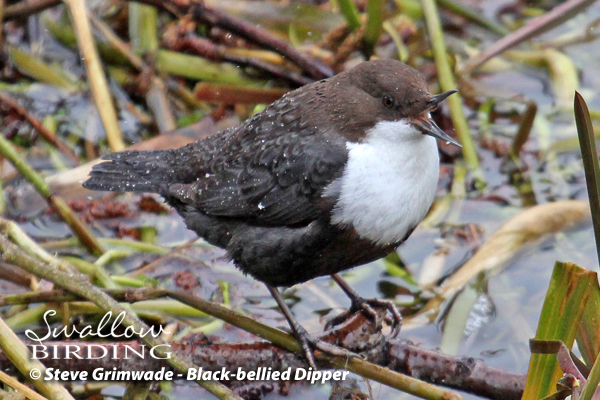 Saturday 23rd March
We left our base in Colchester and as we drove northwards, the snow persisted until around Bury St. Edmunds. After a breakfast stop, we headed straight to Thetford, with snow falling quite heavily. Despite this we walked along the riverbank towards the Bridge pub, meeting Colchester birder and photographer Sean Nixon along the way.

Down below the pulpits of the bridge was a stunning BLACK-BELLIED DIPPER which performed superbly before flying down river. Along the river we also had good views of REDWINGS, EGYPTIAN GOOSE, SISKIN, GOLDCREST and TREECREEPER.

Making the decision to drive into town, we walked back along the river bank and spotted a group of photographers watching two OTTERS. Unfortunately, the OTTERS moved out of the river and into thick undergrowth and not everyone could get on them. Good numbers of SISKINS were noted in Alders around us including some bright males.

With the weather not improving, we headed northwards making a brief stop and watched four BROWN HARE in a nearby field. North of Fakenham, a cracking BARN OWL flew alongside us as it quartered some rough fields. Arriving at Titchwell RSPB reserve, there was no snow but a biting easterly wind!

After a spot of lunch, we checked out feeders close to the visitor centre, where we had excellent views of up to eight BRAMBLING as well as female SISKIN. In the ditch along the path, a single CHIFFCHAFF fed in the shelter from the wind. A male PEREGRINE bombed through the scrape, scattering birds everywhere but failed to make a kill. The Parrinder Hide offered some protection and good numbers of gulls were roosting. Waders included GREY PLOVER, BAR and BLACK-TAILED GODWITS, REDSHANK and TURNSTONE. Over the reedbeds we watched two first year MARSH HARRIERS before we tried the northern section of the hide.

RINGED PLOVER, CURLEW and a smart SPOTTED REDSHANK was seen in company with a REDSHANK allowing good ID comparisons. Back in the southern hide there was little new, so we walked back to the centre for a warming cuppa before wandering along the fen trail. Reaching Patsy's Pool, a scan of the ducks only yielded POCHARD and TUFTED DUCKS.

Then right in front of us were three HEN HARRIERS which included two first year males and a first year female and we were treated to excellent views as they interacted with a female MARSH HARRIER.

A last scan of the pool produced a female RED-CRESTED POCHARD which we had good scope views of. Leaving the reserve, we hadn't gone far when we saw two GREY PARTRIDGE close by in a field sheltering from the steadily falling snow.

With the weather deteriorating, we drove to our hotel where a warm bath was most welcome.
Suitably warmed up, we enjoyed dinner which was fantastic and hoped the weather would improve the following day.

Sunday 24th March
Waking up we found a covering of snow and after a hearty breakfast to stoke the furnaces, drove the short distance to Hunstanton Cliffs and soon picked up several FULMAR cruising along the cliffs with an entourage of HERRING GULLS. Scanning out to sea, a male COMMON SCOTER flew north landing on the water to join a female and further south, an adult GANNET fought its way north into the still biting easterly.

A brief stop at Wolferton Triangle in search of Golden Pheasant proved unsuccessful, so we drove to the Brecks where the snow was a lot deeper. A nearby forest produced 3 superb GOSHAWKS displaying, including adult female, 1st year male and adult male, the two males were at times sparring over the female!

We then drove up to Lynford Arboretum and took a short walk around the feeders where NUTHATCH, COAL TIT and small parties of SISKINS flew overhead. A short walk was made to the lake which was pretty devoid of life apart from an OTTER fishing! Delighted by this, we made our way to Santon Downham where the cold wind made viewing difficult. MARSH TIT, SPARROWHAWK and yet another NUTHATCH were seen although most birds were feeding silently and not calling.

With lunchtime running a bit late, we made a visit to Lackford Lakes and took shelter to enjoy a hot drink. Suitably warmed up, we walked out to a hide where good numbers of gulls loafed about. A scan through these yielded a 3rd winter YELLOW-LEGGED GULL and a 1st winter MEDITERRANEAN GULL, not bad for a quick look.

In the reeds a CHIFFCHAFF was seen briefly before we decided to get another hot drink. Leaving the centre we drove south and there in front of us was a stunning RED KITE drifting along the road! We visited nearby Cavenham Heath but apart from a small flock of FIELDFARE, REDWING and SONG and MISTLE THRUSHES it was pretty quiet.

Despite the weather conditions, we enjoyed an excellent weekend of ‘Spring’ birding...
Next
Previous