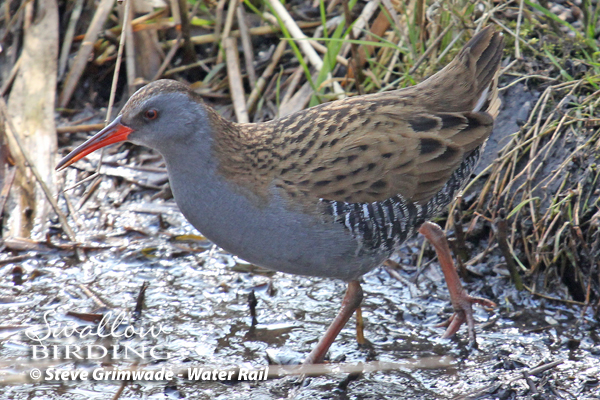 Sunday 7th
We all met in Basildon at 8am and were soon heading northwards. After a stop for toilets and a stretch of legs we noted both SPARROWHAWK and a young male MARSH HARRIER and arrived at Titchwell RSPB reserve in good time. The sun was shining as we parked and around the visitor centre were good numbers of BRAMBLING and SISKIN amongst the more common finches. A lone CHIFFCHAFF flitted around in front of us and even uttered a brief snatch of song!

Walking along the boardwalk, we located a skulking WATER RAIL amongst flooded woodland before hearing at least two calling CETTI'S WARBLERS. Reaching the watchpoint overlooking Patsy's Pool there was a distinctive throng of birds. Up to 25 RUFF and a summer plumaged BLACK-TAILED GODWIT fed in the deeper water, whilst along the muddy fringes a newly arrived LITTLE RINGED PLOVER fed.

MEADOW PIPITS flitted amongst ground foliage and were joined by a single REED BUNTING, GOLDFINCHES and a nice male GREY WAGTAIL, an unusual bird in the spring. MARSH HARRIERS displayed overhead and on the pool we found a female RED-CRESTED POCHARD feeding amongst many GREYLAG GEESE.

It was now time for lunch and we slowly meandered along the path back to van noting two COMMON BUZZARDS overhead. Lunch was very welcome and it was good to enjoy the warmth of the sunshine.

Afterwards a walk was taken along the main path towards the sea. Good numbers of waders were noted on the freshmarsh including AVOCET, OYSTERCATCHER and yet more RUFF. The saltmarsh produced a moulting SPOTTED REDSHANK as well as GREY PLOVER, RINGED PLOVER, REDSHANK and both BLACK and BAR-TAILED GODWITS.

We eventually reached the sea and noticed a female EIDER offshore, whilst along the shoreline were quite a large flock of TURNSTONE and a few DUNLIN, SANDERLING, REDSHANK and OYSTERCATCHERS thrown in for good measure. Another scan of the sea yielded a single RAZORBILL and female GOLDENEYE drifting past.

Retracing our steps southwards we stopped off in the Parrinder Hide, where good numbers of gulls were roosting and amongst these was a second winter MEDITERRANEAN GULL, whilst new birds for the day included KNOT and GADWALL.

With some time remaining we reached the centre where a WATER RAIL was in the ditch nearby and took a short drive to Choseley Barns produced YELLOWHAMMER, CORN BUNTING, GREY PARTRIDGE and plenty of BROWN HARES rounded off a good day.

After checking in to the hotel, we met to complete the bird list before enjoying an excellent meal.

Monday 8th
We had breakfast at 8am and despite a good meal the night before, didn’t skimp on the food! Leaving the hotel we drove south to the Brecks and at our first site found lots of COMMON BUZZARDS, as well as two lovely RED KITES. Despite a thorough search, we could not locate Goshawk.

After a break for coffee we visited a heathland site where again quite a few COMMON BUZZARDS were noted but a cool wind kept Stone Curlews from view.

After lunch a trip was made to Thetford where we took a stroll along the river. A GOLDCREST flitted about in front of us before we made our way towards town. After a quick stop to have a group photograph with a bronze Captain Mainwaring, we located an OTTER that had caught a 2 foot long Pike earlier in the day and was quite intent on devouring this large meal under a bush. Eventually it came out and swam along the river before disappearing again into a bush.

Back near the carpark, a pair of EGYPTIAN GEESE were seen before we drove to Lynford Arboretum. We just spent a short time here seeing TREECREEPER, COAL TIT and SISKIN.

Arriving at our hotel slightly later than planned, we met for a meal at 7.00pm which was once again very good.

Tuesday 9th
After a good nights sleep and a hearty breakfast we made the short journey to Hunstanton Cliffs, where it didn't take long before we spotted our first FULMAR as it cruised along the cliff top. Another was seen briefly before we headed down to Fakenham for a visit to Sculthorpe Moor reserve. After checking in, we slowly wandered down to the hides noting good numbers of BRAMBLING, COAL TIT, SISKIN and both BLUE TIT and GREAT TIT.

Just before Whitley Hide, we could hear NUTHATCH singing and we had brief views as it ran up a tree. From the hide itself we had excellent views of around 50 BRAMBLING as well as REED BUNTING, CHAFFINCH, MARSH TIT and two stunning BULLFINCH! Below the feeders a BANK VOLE scurried around looking for seed and eventually we had brilliant views of WATER RAIL in the open.

Walking to the scrape produced our first GREY HERONS of the tour as well as BARN OWL perched on a post. KESTREL and MARSH HARRIER were noted before we headed back towards the centre for a welcome coffee and lunch. A NUTHATCH was seen on feeders near Old Gits Corner briefly.

We enjoyed lunch in the warm sunshine in the shelter of the building which was very pleasant indeed. Afterwards a drive was taken to Salthouse Beach and on the way we had great views of a perched BARN OWL. A few TURNSTONE and a LITTLE EGRET were present on arrival and we drove westwards stopping at Cley Visitor Centre for facilities before making a stop at Cley Beach carpark. On the sea a SANDWICH TERN flew past and on Eye Field we found a cracking PURPLE SANDPIPER, RINGED PLOVER and around 1000 BRENT GEESE which included two leucistic birds.

The remainder of the afternoon was spent at Holkham Pines and although a little hazy we saw some good birds, including close views of MARSH HARRIER, EGYPTIAN GEESE, SPARROWHAWK and JAYS.

We arrived back at our hotel and enjoyed yet again a fantastic meal.

Wednesday 10th
We said our goodbyes to Old Hunstanton and drove south eastwards towards the Suffolk coast. Our journey produced a large flock of GOLDEN PLOVER, CURLEW and a pair of COMMON BUZZARDS.

Arriving at Minsmere the sun was shining as we wandered towards the sea. A couple of female BLACK REDSTARTS were seen near to the old car park and on the sea we noted around 20 RED-THROATED DIVERS and an adult GANNET flying north.

A SWALLOW flew north as we made our way to the East Hide which was alive with hundreds of BLACK-HEADED GULLS. A scan through the area yielded a female SMEW, BARNACLE GEESE, DUNLIN, BAR & BLACK-TAILED GODWITS, TURNSTONE and a brief BITTERN that was only seen by Steve.

We enjoyed lunch in the warm sunshine before making a visit to the Island Mere and Bittern hides. Three GARGANEY showed well from the former hide as did COMMON SNIPE and from Bittern hide we watched a small number of MARSH HARRIERS quartering the reedbed.

After a welcome cuppa and slice of cake we headed off to Westleton Heath and had brief views of DARTFORD WARBLER as well as a SAND MARTIN flying northwards, which rounded off an excellent tour which was due to a great group with laughs a-plenty.
Next
Previous