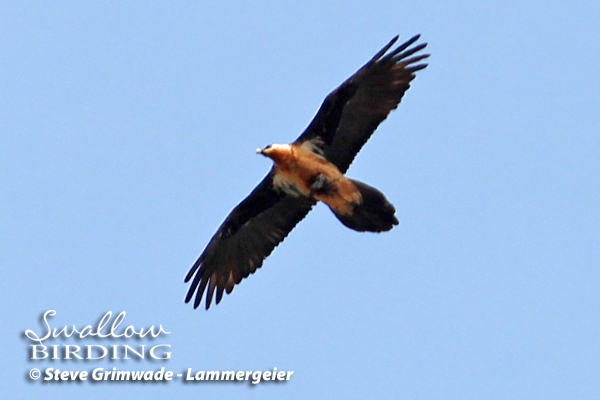 Sunday 14th
We met mid afternoon at Stansted for our early evening flight to Zaragoza which arrived around 8.00pm local time. After sorting out the vehicle, we were soon on our way and arrived at the Boletas Birdwatching Centre where we were greeted by Esther and Josele.

After dropping off our bags we sat down for dinner, which was well received before we were shown to our rooms, very much looking forward to the following day.

Monday 15th
We awoke to clear conditions and met for a pre-breakfast walk around the village. One of the first birds was a ROCK SPARROW perched on a nearby factory roof. CORN BUNTINGS sang from almost every available perch and it wasn't long before we saw our first raptor of the day, BLACK KITE.

CRESTED LARK, SPOTLESS STARLING, SWALLOW, HOUSE MARTIN, SWIFT and WHITE STORK were all noted before we reached the river and NIGHTINGALES sang in unison. We also spotted BLACKCAP and WILLOW WARBLER but with time getting on retraced our steps for a very enjoyable breakfast.

After packing the van we drove a short distance to an open area, where THEKLA and CRESTED LARKS showed to give good ID comparison. On the slopes we watched a pair of BLACK-EARED WHEATEAR flitting around with some BLUE ROCK THRUSH in the background. Good views were also enjoyed of a HOOPOE as it fed on the ground before flying off.

As the temperature warmed we began seeing raptors with RED KITE and GRIFFON VULTURE drifting through. A SHORT-TOED EAGLE was seen hovering over distant fields and in the cemetery a male WOODCHAT SHRIKE called from atop a Cypress tree.

We drove northwards stopping to look at a pair of WOODCHAT SHRIKE on roadside wires before arriving at Vadiello. The air was alive with GRIFFON VULTURES interspersed with large numbers of both ALPINE SWIFT and CRAG MARTINS. Both CHOUGH and RAVENS called from the rocky outcrops as they tumbled through the air displaying.

We spent the next few hours exploring the area and finding a migrating male MONTAGU'S HARRIER passing high over the mountain tops, whilst EGYPTIAN VULTURE, BOOTED EAGLE, PEREGRINE, KESTREL and more SHORT-TOED EAGLES were seen well.

It took a while before we found our target but when a superb adult LAMMERGEIER came into view it was quite superb as it circled a rocky crag. Although fairly distant, we picked out all the relevant features of this much sought-after raptor.

A male SUBALPINE WARBLER sang from scrub, whilst on the reservoir we found a small number of CORMORANT and a single YELLOW-LEGGED GULL. With stomachs rumbling, we had lunch in the shade and it wasn't long before a LAMMERGEIER came over, this time much lower and we managed better photographs.

The warm weather had tempted out many butterflies with CLEOPATRA being the most common species. Stopping on the roadside proved productive with brief views of NIGHTINGALE as well as more butterflies and insects including GREEN TIGER BEETLE and WHITE-SPOTTED ROSE BEETLE.

The last stop of the afternoon was a large reservoir which we visited once a stop had been made for ice cream and cold drinks. The water levels were high although a few good birds were seen here. CATTLE and GREAT EGRETS fed in shallows, whilst MALLARD and GREAT CRESTED GREBES were on the open water. Raptors were well represented with male GOSHAWK, SPARROWHAWK, BOOTED EAGLE and a male MERLIN that dashed by before landing in a tree. Walking around a shallow bay we discovered a good flock of YELLOW WAGTAILS and two nice ‘spangly’ WOOD SANDPIPERS on the shoreline.

A CUCKOO called in the distance but didn't show, although we did get better views of SKYLARK and two SHORT-TOED LARKS came out briefly on some open fields. With temperatures reaching the high 20s we headed back to base, where a cooling shower was in order before completing the bird list and enjoying an ice cold beer.

Esther cooked a delicious meal, which as always went down very well and afterwards we took a stroll around the village, hearing BARN OWL and finding at least 27 MOORISH GECKOS on buildings as well as a brief GIANT PEACOCK MOTH.

Tuesday 16th
Some of the group met for an early morning walk around the village noting the usual suspects with additions of male SUBALPINE WARBLER and the sound of calling BEE-EATERS down by the river before we headed back for breakfast.

Today we headed south to the area known as Los Monegros and after stopping to photograph WHITE STORKS we made another stop alongside a river. Although some tree and scrub clearance had taken place we managed to get good views of a pair of WRYNECK, as well as displaying LITTLE RINGED PLOVER, three SISKINS, BLACKCAPS and we heard several singing CETTI'S WARBLERS.

The following few hours spent exploring areas of steppe were productive, as several species of larks were found, ranging from the massive CALANDRA to the tiny LESSER SHORT-TOED with a cast of THEKLA, CRESTED and SHORT-TOED. BLACK-EARED WHEATEARS flitted amongst the rock strewn hillside and in the scrubby bushes were several pairs of SPECTACLED WARBLER.

Further along the road we took another track off and quickly found a stunning male GREENLAND WHEATEAR as well as male WHINCHAT and TAWNY PIPIT. A small party of PIN-TAILED SANDGROUSE were spotted in a close-by field which eventually flew up and away. Good numbers of larks were again present here before we decided to find some shelter and shade for lunch.

We found an old barn and as we approached it a BARN OWL was seen, briefly flying out and disappearing in a small part of the barn. Finding a small amount of shade was pleasant as temperatures were now reaching around 30 degrees. A male LESSER KESTREL drifted over and in the Almond Groves we saw HOOPOE and WOODCHAT SHRIKE.

After lunch we drove along a track and got better views of the male WOODCHAT SHRIKE as he sang from a dead tree, whilst a WHITETHROAT fed silently in a tree nearby. Birds had quietened down somewhat so we drove some random tracks using the van as a hide.

An IBERIAN GREY SHRIKE was seen briefly and the open fields held quite a few BLACK-EARED WHEATEARS. Steve had brief views of a GREEN LIZARD which quickly scuttled off but an OIL BEETLE in the road was much more obliging until it quickly disappeared in the verge.

Further along the road were some quarrelling HOOPOES, more SHORT-TOED LARKS and a pair of SPECTACLED WARBLER before we visited a small lagoon further south.

Here there were plenty of birds to see with RED-CRESTED POCHARD, BLACK-NECKED GREBES, 5 BLACK-WINGED STILT, 5 PURPLE HERON and a lone LITTLE EGRET. A single summer plumaged BLACK TERN hawked over the water and in the reed-bed we saw plenty of GREAT REED WARBLERS, 2 PENDULINE TITS and a male BEARDED TIT which was a first record for the site. Several MARSH HARRIERS were seen in the reedbeds.

As we left the site, a small party of TREE SPARROWS were seen and further along the road, we came across a feeding party of BEE-EATERS, one of which allowed close approach.

On our journey back we stopped for ice creams in a small town and overhead were treated to the sight of around 75 BLACK KITES moving northwards, before ‘kettling’ then moving off north again.

We got back in good time and once again enjoyed a shower before one or two cold beers and another delicious dinner.

A post dinner walk again produced MOORISH GECKOS as well as a single FIREBUG and several BLACK BEETLES, but no sign of any Scops Owl so far this spring.

Wednesday 17th
As there was no official early walk this morning, we had breakfast and drove the short distance to Rio Flumen where we took a stroll for around 3.5 hours. As we reached the bottom of the road we picked up a pair of CIRL BUNTINGS, perched in a small tree and giving reasonable views before flying off. Checking out the bushes and trees proved fortuitous with finding a male WOODCHAT SHRIKE, then a cracking male WESTERN ORPHEAN WARBLER feeding in a tall tree with a BLACKCAP for comparison.

WRYNECKS called and one flew over our heads before we started a walk along the valley floor. WILLOW WARBLER and a female PIED FLYCATCHER were seen together and we saw the first of around 10 NIGHTINGALES perched in the open. Good numbers of butterflies were seen in the warm sunshine including DINGY SKIPPER, CLOUDED YELLOW and EUROPEAN SWALLOWTAIL.

Overhead, plenty of raptors were soaring over with BOOTED EAGLE, EGYPTIAN VULTURE and SHORT-TOED EAGLE as well as the common GRIFFON VULTURES. ROCK SPARROWS were seen along the cliff faces and whilst checking out numerous CRAG MARTINS, we discovered several RED-RUMPED SWALLOWS, a recent colonist to the area.

Plodding onwards we picked out BLACK WHEATEAR on the cliffs and a few minutes later a male ROCK THRUSH appeared on a distant crag. Getting nearer to the area then produced 2 males, one giving better views as it sat on a rocky outcrop.

The sunshine was beating down and soon we heard the distinctive song of a WESTERN BONELLI'S WARBLER which eventually came close and showed well as it sang from a nearby tree. We began to retrace our steps and found GREY WAGTAIL, LINNET and a HOBBY on the return leg. With a few minutes to spare before lunch we checked out the cemetery, but the high heat made birds elusive, although we did see distant TAWNY PIPIT and a WOODCHAT SHRIKE.

We got back to Boletas where Josele had cooked us a Spanish Omelette, which along with tomato, olives, cheese and various meats went down very well. We took a couple of hours break in the shade afterwards before saying our goodbyes to Esther and Josele.

A trip was taken to a nearby castle but the birding was really quiet due to the fact it was around 30 degrees. We did however see THEKLA LARK, NORTHERN WHEATEAR, COMMON KESTREL and a male BLACK-EARED WHEATEAR. Checking out another area nearby, we heard a woodpecker calling loudly from a nearby tree and eventually got close enough to see that it was a male IBERIAN GREEN WOODPECKER which was difficult to make out.

Driving south towards Zaragoza we stopped at a service station, where we had close views of CRESTED LARK and also brief views of ZITTING CISTICOLA in the adjacent wheat fields. After a cold drink or ice cream, we arrived at Zaragoza airport a little before check in time but once checked in, we completed the bird list and relaxed before our 10.00pm flight back to Stansted which arrived 15 minutes early.

It had been a fantastic tour with plenty of good birds and company with beautiful scenery and delicious food.
Next
Previous