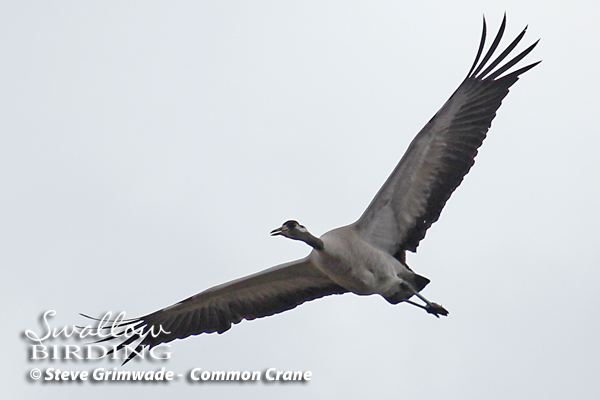 The day started off at Lakenheath RSPB reserve where we headed out westwards noting good numbers of singing warblers including WHITETHROAT, REED and CETTI’S. It didn’t take long before we located a small party of HOBBY feeding low over the reedbed and perching in the Poplars allowing good scope views. A BITTERN was seen briefly and two COMMON CRANES flew over as did CUCKOO whilst we were overlooking the reedbed.

We moved onto the Joist Fen watchpoint where another BITTERN was seen and three COMMON CRANES gave a flyby right over our heads! There were hundreds of COMMON SWIFT but no raptors present so we retraced our steps and hadn’t got far when the adult male RED-FOOTED FALCON flew right in front of us before making a re-appearance a few minutes later.

We enjoyed watching this superb falcon feeding close by and occasionally it perched in the trees before going off on another hunting sortie.

After a celebratory coffee, we moved on to East Wretham Heath where the carpark was heaving. A short walk later and we located a calling male COMMON REDSTART sitting in a tree although it was quite elusive. From the woodland behind us we could hear WOOD WARBLER singing and eventually we got good but brief views as it flitted around the bushes.

After a late lunch we headed off to Minsmere RSPB reserve and a quick cuppa was enjoyed before wandering down towards South Hide. On our way we watched a roosting TAWNY OWL in a tree, before standing for a brief moment in the hope that a Savi’s Warbler would appear that had been heard earlier in the day. With rain falling steadily we carried on towards south hide, where both COMMON and SANDWICH TERNS were noted.

Walking towards the sluice, we watched a male BEARDED TIT sitting in the reeds before flying across the path. Overlooking the south levels we soon picked out a feeding SPOONBILL in one of the pools before heading back towards the centre. One of the group had stayed behind listening for the SAVI’S WARBLER and as we approached it started singing! Luckily it was seen sitting low down in the reeds, but was only seen by a few before it dropped down and out of sight.

It had been a fantastic day and we had seen some superb birds and been very lucky with the weather!
Next
Previous