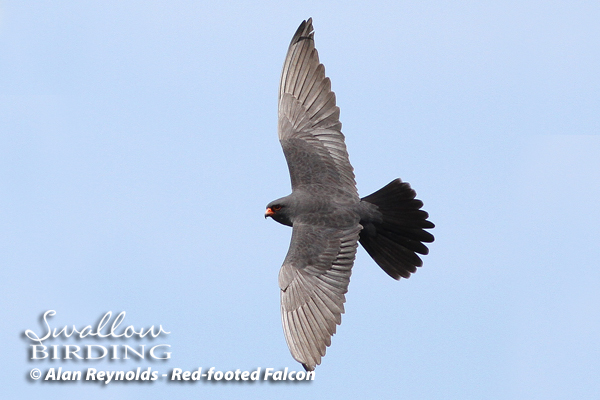 Saturday 25th May
Making our way north we stopped for breakfast and then drove on to Cavenham Heath NNR where the first bird we got our bins on was a singing male CUCKOO! A short while later, we located a STONE CURLEW sitting forlornly, hopefully appreciating the fact that it wasn’t raining.

With bright and sunny weather we arrived at Lakenheath RSPB to find the carpark pretty full and it was only 9am. After checking in at the centre, we made our way onto the reserve noting good numbers of REED BUNTING, REED WARBLER and a singing CETTI’S WARBLER.

At least four COMMON BUZZARDS were seen drifting over. Several MARSH HARRIERS flew over the reedbed and a food pass was seen between the male and female. It didn’t take us too long to locate out target, as there was a large crowd overlooking the reedbed and eventually we picked up the long staying male RED-FOOTED FALCON sitting in a tree.

Over the next hour or so it gave some stunning views, including flying over only feet away. HOBBIES were also seen and one individual hunted SWIFTS over the reedbeds. A BITTERN gave several flybys over the reeds, whilst other species seen included GREEN WOODPECKER and REED WARBLERS.

After a coffee back at the centre we headed off to Santon Downham, where we had good views of male FIRECREST as well as a nesting pair of Nuthatches. On the railway line we were treated to a show from the steam train Tangmere, which was running from London Liverpool Street through to King’s Lynn to celebrate 60 years of Britannia Pacific’s on the Great Eastern Mainline.

Our next destination was the Norfolk Wildlife Trust reserve at East Wretham and once again the carpark was full. Walking over the Heath, we watched an OYSTERCATCHER flying to and fro with food for its hungry chicks, whilst on the mere were EGYPTIAN GEESE, GADWALL, SHOVELER, LAPWING and LITTLE GREBE amongst others.

Despite searching we couldn’t locate any Redstart or Wood Warbler and talking to the other birders on site apparently they hadn’t seen any either, but for some compensation we did have good views of MARSH TIT and a SPOTTED FLYCATCHER in and around the pines.

Heading northwards, we stopped along the coast, where immediately we spotted a RED KITE circling over and soon afterwards, a male MONTAGU’S HARRIER drifted into view. We watched the female come off the nest in a food pass which was amazing!

Arriving at our base, we checked in before meeting in the bar to complete the checklist and enjoying a very good meal.

Sunday 26th May
We met for a pre-breakfast walk down to the beach and with the tide high, saw quite a few waders moving to roost towards Gore Point. There were GREY PLOVERS, BAR-TAILED GODWITS, KNOT, OYSTERCATCHERS and DUNLIN. A FULMAR flew west towards the nesting area on Hunstanton Cliffs.
Back on the golf course we noted a small flock of LINNET, MISTLE THRUSH and MEADOW PIPITS. Then back to the hotel for a hearty breakfast before driving the short distance to Titchwell RSPB reserve.

We arrived to find plenty of space in the carpark and from here, walked out through the fen trail to Patsy’s Pool. Both WILLOW WARBLER and CHIFFCHAFF were seen as well as BLACKCAP and on the pool we found a pair of LITTLE RINGED PLOVER amongst AVOCETS and GEESE.

Back on the main path we had excellent views of CHINESE WATER DEER, SEDGE and REED WARBLERS and an interesting group of BLACK-TAILED GODWITS and REDSHANKS that appeared to be mobbing something. Despite hanging about we didn’t see the culprit. From the Island hide, a second year LITTLE GULL was seen bathing, whilst on a nearby island were a pair of RED-CRESTED POCHARD and in the reeds were small numbers of BEARDED TITS.

The walk up to the sea gave us several summer GREY PLOVERS, LITTLE EGRET and plenty of AVOCETS. The sea was flat and calm and there was little breeze, quite unusual at Titchwell! A female COMMON SCOTER and a first year male EIDER were seen close inshore and on the beach we enjoyed watching good numbers of SANDERLING, BAR-TAILED GODWIT, TURNSTONE, GREY PLOVER and OYSTERCATCHERS. SANDWICH, COMMON and LITTLE TERNS were also seen close inshore.

The walk back along the path produced a second flyover SPOONBILL, the first noted by a few advance members of the party. From the Parrinder Hide we found four more LITTLE GULLS, COMMON BUZZARD and a summer-plumaged SANDERLING that looked superficially like a Temminck’s Stint.

After a coffee and spot of lunch in the picnic area, we drove along the coast stopping at Stiffkey Fen. The walk produced LESSER WHITETHROAT and once on the sea wall, we found two LITTLE GULLS, 2 adult MEDITERRANEAN GULLS, LITTLE RINGED PLOVERS, COMMON SANDPIPERS and male TEAL.

Moving onwards we stopped at Cley East Bank and wandered along the path. Eventually we reached a small group of people who were watching WOOD SANDPIPER at close range. We had great views of this delightful wader as it fed in the wet margins of the Serpentine.

With time getting on we headed back to base, where a cool shower was the order of the day before meeting for yet again another superb evening meal.

Monday 27th May
We awoke to find a superb day weatherwise so after breakfast we said our goodbyes to the hotel staff and headed down to Strumpshaw Fen RSPB reserve near Norwich. We wandered around the reserve and despite a full carpark, saw very few people. Several MARSH HARRIERS and three HOBBIES gave excellent views over the reeds and in the scrub we had good sightings of CETTI’S WARBLER.

Further along the track we watched a singing male GARDEN WARBLER which was briefly joined by a BLACKCAP. A few butterflies and dragonflies were seen including VARIABLE DAMSELFLY and quite a few BRIMSTONE. From the Tower Hide we had excellent views of a female KINGFISHER as it fed from a perch and three WIGEON were unusual to see, as was a MEDITERRANEAN GULL.

The return route gave little except for several HAIRY DRAGONFLIES and despite searching, we didn’t manage to see any Swallowtails. After lunch we drove southwards to Minsmere and Westleton Heath. At the latter site we watched a couple of DARTFORD WARBLERS as they flitted around the heather and a pair of MEDITERRANEAN GULLS flew over.

On reaching Minsmere we headed straight for the tearoom for a well deserved cuppa! Afterwards we checked out the ANT-LION pits nearby before wandering down to West and South Hides. A third summer YELLOW-LEGGED GULL was seen as were several more MEDITERRANEAN GULLS and a couple of SANDWICH TERNS. From the South Hide we found a flock of KITTIWAKES and waders included KNOT, TURNSTONE and five RINGED PLOVERS of the race Tundrae.

Back in the carpark we rounded off the tour with a SPARROWHAWK over our heads. We’d had a fantastic tour with good weather throughout, some great birds, good memories and a superb group!
Next
Previous