WHERE THE PAGER TAKES US – SPRING SPECIAL – Saturday 1st June 2013 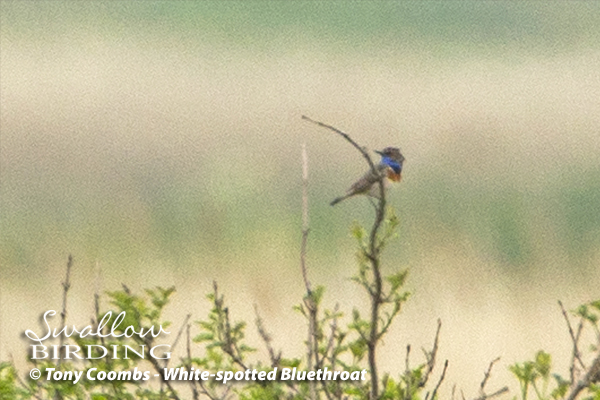 We began the day at Lakenheath RSPB reserve in the hope that the long-staying Savi’s Warbler would be present. Despite searching, it hadn’t been seen since early morning although we did have some compensation in the form of a superb singing GRASSHOPPER WARBLER which showed brilliantly. Other sightings included BITTERN, HOBBY, CUCKOO and RED KITE.

Moving northwards, we stopped at Cley NWT and walked out along East Bank to a small gathering of birders. After a long wait, we gained views of a beautiful singing male WHITE-SPOTTED BLUETHROAT as it perched on top of a bush singing.

Our last destination was Titchwell RSPB reserve where we enjoyed a few hours birding. A pair of GARGANEY were seen at Patsy’s Pool, along with LITTLE RINGED PLOVERS and from the main footpath we watched a sleeping SPOONBILL on the saltmarsh. On the freshmarsh we enjoyed magnificent views of up to 8 LITTLE GULLS, some feeding right in front of the hide!

Other species included more LITTLE RINGED PLOVERS, DUNLIN and BAR-TAILED GODWITS which rounded off a good day.
Next
Previous