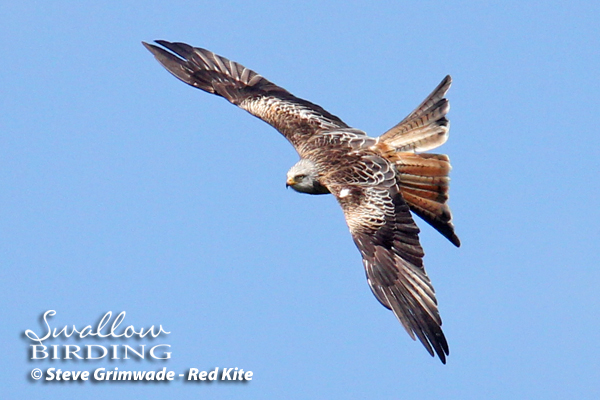 Friday 7th June
Our journey to Wales got off to a slow start when we became stuck in traffic on the M25 but eventually we made our way onto the M40 and it didn't take long to spot our first RED KITE of the tour. 32 were counted before we turned off towards Oxford and with a few COMMON BUZZARDS and KESTRELS thrown in for good measure, things improved.

We eventually reached a site where we saw our first Welsh RED KITES and a short time later, stopped in a carpark. The sun was blazing down as we enjoyed our lunch and adjacent to the picnic area we watched LESSER REDPOLL, NUTHATCH and GOLDCREST in and around the feeders and trees.

Afterwards, a stroll was taken into the Oak woodland and we soon spotted a male PIED FLYCATCHER, sitting on a post eating a large juicy caterpillar. Several others were seen in the wood, some going in and out of nest boxes. Further along the path we had cracking views of a singing male WOOD WARBLER as he belted out his trilling song from above us.

Over nearby ridges and moorland RED KITES were a common sight, along with COMMON BUZZARDS and as we came back through some grazing fields, a COMMON REDSTART was seen briefly but failed to show again. As short while later we then spent some time watching a male COMMON REDSTART giving stunning views only feet away! A NUTHATCH was also seen here briefly.

The remainder of the afternoon was spent ambling along the river where at least two pairs of TREE PIPIT were seen, including some displaying males and on the river, we found both GREY WAGTAIL and a juvenile DIPPER feeding in the fast flowing stream.

With time getting on we had a brief stop overlooking moorland, where a CUCKOO was seen perched and another pair of TREE PIPIT showed well. Our first RAVEN flew over 'cronking' and a WHINCHAT was heard and seen briefly before flying into a plantation.

We arrived at our hotel in good time and after checking in, unpacked and settled in with a drink and to complete the bird list before enjoying a good evening meal with a RED KITE or two flying past the window.

Saturday 8th June
We awoke to another fine, sunny day and with a few minutes spare before breakfast we checked out the view and wildlife from the carpark. A few RED KITES and COMMON BUZZARDS drifted over and in the field above the hotel were a family of FOXES playing.

After a satisfying breakfast, we drove a short distance to view the sea. Almost immediately we found a number of MANX SHEARWATERS flying past, with some landing on the water and others plunge diving with GANNETS, it was a wonderful sight! Four COMMON SCOTER flew northwards and a pair of GREAT CRESTED GREBES bobbed around on the sea.

We then located a feeding flock of MANX SHEARWATERS numbering around 200 birds, which was good to see. Moving on a short distance, we stopped to see NORTHERN MARSH ORCHIDS growing in the dunes before moving on to the RSPB reserve at Yns-hir.

After parking, LESSER SPOTTED WOODPECKER called from behind us but then went silent. We wandered across the carpark and met Michaela Strachan, who was coming out of the centre and after checking in we wandered down through a lovely area of woodland, where we watched SPOTTED FLYCATCHER in the oaks while BLACKCAPS sang around us.

On the path to Saltings Hide, a GRASS SNAKE was seen briefly and from the hide there were plenty of CANADA GEESE as well as REDSHANK, OYSTERCATCHER, CURLEW and a flyby GOOSANDER.

The scrub was full of REED BUNTINGS, SEDGE WARBLERS and a pair of STONECHATS that were seen well from a raised hide overlooking the pools. Back along the track we watched a COMMON REDSTART and PIED and SPOTTED FLYCATCHERS before taking a track into deeper woodland. The distinctive trilling of WOOD WARBLER was heard and then seen as it searched for caterpillars for its' young.

We then had lunch back in the picnic area where it was ‘baking’ in the sun and afterwards drove westwards to a Red Kite feeding area, where we listened to a talk about Red Kites from an RSPB member of staff, before wandering down to the lake. Overhead, around 50 RED KITES had started to gather for the 3pm feed and at one time at least 200 birds were present, including several wing-tagged birds.

The whole spectacle was simply amazing! To see these magnificent birds at close range was a privilege. We then partook in tea and cake whilst watching LESSER REDPOLL, SISKIN, NUTHATCH, HOUSE SPARROW and GREENFINCHES on the feeders before talking a circular walk around the lake.

It was quiet but we did see LITTLE GREBE, WILLOW WARBLER, LESSER REDPOLL and of course, more RED KITES! With a few minutes spare, we drove to a nearby river where we found some GREYLAG GEESE and a JAY but little else, so after a fuel stop we arrived back for a shower and met for a drink and the bird list, sitting outside before our evening meal.

Sunday 9th June
After breakfast we loaded up the van whilst a pair of RED KITES circled above us and we were soon on our way northwards through Snowdonia National Park. A stop close to Beddgelert produced a couple of GREY WAGTAILS and a BEAUTIFUL DEMOISELLE DRAGONFLY.

Eventually we reached Anglesey and headed straight to South Stack RSPB reserve, where they were holding a Heathland Celebration Day and the place was packed! We did manage to find a parking spot and whilst enjoying lunch in the sunshine, spotted our main target, CHOUGH! Around 25 of these charismatic birds flew over the headland calling and eventually came closer giving good views.

We then spent some time watching the masses of seabirds on the cliffs, which included GUILLEMOTS, RAZORBILLS, FULMAR, KITTIWAKES and several PUFFINS. We also bumped into our old friend Derek Moore who was there with the RSPB and it was good to catch up with him. The cliffs and heathland were awash with amazing wildflowers, including SPATULATE FLEAWORT which grows nowhere else on earth other than South Stack. Other flowers included SHEEPS-BIT SCABIOUS, ROCK SEA SPURREY, SEA CAMPION, SCURVY GRASS, KIDNEY VETCH and SPRING SQUILL.

We climbed higher up and spent time on the path down to the lighthouse where more PUFFINS were seen as well as two RAVENS, CHOUGH and a mixed group of LESSER, GREAT BLACK-BACKED and HERRING GULLS. On the top of the crags we found both WHEATEAR and several ROCK PIPITS. We then sat in the sunshine enjoying a well deserved cuppa or ice cream, before taking a different path along the coast, back to the carpark.

Leaving the area we then went to Holyhead, where we located up to six BLACK GUILLEMOTS bobbing around on the water, as well as CORMORANT, SHAG and OYSTERCATCHERS. With time spare we visited Penrhos Coastal Park. Although low tide, we found a small group of CURLEW, OYSTERCATCHERS, up to six RED-BREASTED MERGANSERS, SANDWICH TERN and best of all a stunning adult ARCTIC TERN that fished along the river.

A few minutes later we were checking in at the hotel and after a shower etc we met in the bar for the bird list and dinner before retiring for the evening.

Monday 10th June
Awaking to another stunningly bright day, after breakfast we drove to Cemlyn Bay Nature Reserve where the air was full of terns. Close to the road were several RED-BREASTED MERGANSER and a few OYSTERCATCHER fed along the shoreline. Every few seconds, SANDWICH TERNS would fly in either to wash and bathe or were carrying a bill full of Sand Eels.

Over the next hour or so we marvelled at the spectacle of three species of terns, ARCTIC, SANDWICH and COMMON. Amongst the many BLACK-HEADED GULLS were at least two adult MEDITERRANEAN GULLS complete with their glossy black hoods.

A small party of DUNLIN fed in the shallow lagoon, whilst two RINGED PLOVER were on the edge of the beach. A quick scan out to sea yielded a few passing GANNETS and a MANX SHEARWATER, that came reasonably close inshore before changing direction and flying out, how frustrating!

With the wind starting to pickup, we changed position and checked out the next beach along the coast. A careful scan of seaweed and beach produced around 50 RINGED PLOVER of the tundra race, as well as two summer plumaged SANDERLING, 10 TURNSTONE and around 6 DUNLIN.

From here we left Anglesey and stopped off at RSPB's Conwy reserve. A walk to the hides was quite productive with at least two pairs of COMMON SANDPIPERS, nine BLACK-TAILED GODWITS, REDSHANK, LAPWING and OYSTERCATCHERS. In distant trees we watched a roost of LITTLE EGRETS and GREY HERONS and other species included SHOVELER, TEAL and TUFTED DUCK.

With lunchtime approaching we stopped at the bird feeding station, where a beautiful male BULLFINCH fed on the seed feeder. We then enjoyed lunch in the sunshine, whilst enjoying a drink from the excellent RSPB tearoom. Afterwards, we left for our journey back to Essex.

COMMON BUZZARDS were quite numerous and as we drove around the M25 a RED KITE drifted over northwards being mobbed by a few CARRION CROWS, which rounded off an excellent tour, with fantastic weather throughout and good birding and a great group of people.
Next
Previous