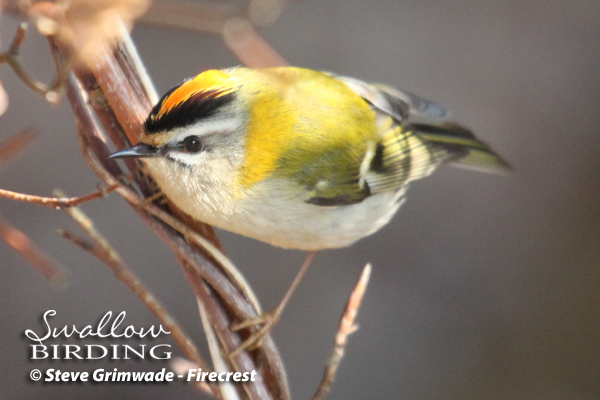 Saturday 15th June
We left Essex and headed southwestwards noting several COMMON BUZZARD and two RED KITES along the M3 before arriving in the New Forest. On arrival it was pretty windy from our vantage point over the forest but we persevered and a short while later, a male GOSHAWK flew past. It was then seen flying slowly over the woods, at times joined by a second bird.

COMMON BUZZARDS soared in the wind and we picked up a distant RED KITE circling over the ridgeline. WILLOW WARBLERS sang around us and one individual perched up on a dead tree. A HAWFINCH flew over calling which was frustratingly brief but we did have good views of a pair of WOODLARK foraging on the ground before they returned to the trees.

SISKINS flew over as did a pair of BULLFINCH before disappearing into a small copse. With the conditions still windy, we went for a walk down in the woods. A male BULLFINCH gave good views as it fed on the ground and we watched a TREECREEPER and WREN come in and out of nests in an old tree trunk. A drizzly shower sent us scuttling into the woods and this proved to be a good thing as we found a female REDSTART feeding a juvenile close by.

On the way back we had brief views of GOLDCREST before heading into town for facilities and then onwards for lunch at Beaulieu Road Station. A pair of CHAFFINCHES fed on the ground as we had lunch and afterwards we wandered out towards Denny Lodge. The wind made everything keep down, although we did find several STONECHATS in the heather.

Once in the shelter of the woods, we came across a LARGE RED DAMSELFLY roosting on a bracket frond, and also we had a good view out over the bog. COMMON KESTRELS were present in good numbers and COMMON BUZZARDS were soaring over the treetops.

With a little time left we decided to head back to our first site, as the weather had improved somewhat but on arrival, the wind was as strong as ever and very little was seen, so we cut our losses and headed to the hotel to check in before having our evening meal. Later, we met up with old friend Paul Levey who lives nearby and he joined us for a spot of Nightjar hunting.

At around 9.00pm we drove a short distance to the forest and found the wind had dropped substantially, although it was still a little keen. More STONECHATS were seen before we took position behind a clump of Gorse. After a few minutes we heard the squeak of WOODCOCK and a few seconds later, a WOODCOCK flew over the treetops on its roding flight.

We caught up with at least three more WOODCOCKS including a superb bird that flew right past us calling! A NIGHTJAR churred in the distance and then as it got dark, several of the group saw a NIGHTJAR flying low over the Heath before dropping down again. We could hear the sound of COMMON SNIPE as they were moving their young across the marsh and also we came across some HEATH-SPOTTED ORCHIDS in the heather.

With light levels dropping rapidly, we headed back to base for some well earned rest.

Sunday 16th June
Opting for a slightly later breakfast this morning due to a late night the previous evening, we went outside to find the wind had dropped considerably. We decided to head back into the forest to search for birds that we didn't see the previous day. A couple of GREY WAGTAILS flitted around a pond and we caught up with a fine male BULLFINCH, NUTHATCH and three GADWALL.

We wandered into the wood and noted good numbers of SONG THRUSH and BLACKBIRDS feeding in the damp woodland and a couple of juvenile NUTHATCH entertained us in the treetops. Reaching a clearing, at least three FALLOW DEER watched us from the top of the slope, but behind us we heard a high pitch calling which turned out to be a cracking male FIRECREST.

To our delight, over the next ten minutes he sang from above us as he flicked around a Holly bush. We then slowly walked back and found a female REDSTART in the woods as further away, a male sang.

We then drove to Blashford Lakes, where we enjoyed lunch on picnic tables before taking a walk to the woodland hide. GREAT SPOTTED WOODPECKER, NUTHATCH and the common FINCHES were seen feeding here and dense woodland produced several singing male BLACKCAPS. From the hide overlooking Ivy Lake we watched COMMON TERNS nesting on rafts and a REED WARBLER was spotted close by.

The next hour was spent in Tern hide where 10 EGYPTIAN GEESE, 2 OYSTERCATCHER, 4 LITTLE RINGED PLOVER, REDSHANK, a third-summer YELLOW-LEGGED GULL and a very unseasonal male GOLDENEYE were seen, with hundreds of COMMON SWIFTS overhead. The walk back to the centre produced singing male GARDEN WARBLER, but this disappeared after a car went through at speed.

Our last site enabled us to take a walk into an area of mixed woodland and we hadn't got far when we heard the distinctive song of a male WOOD WARBLER. Eventually we were more than happy to get good views as it flitted around the trees, quivering as it sang. After this we could not resist a celebratory Ice cream, which was delicious and we then left the area for our drive back to Essex. The M25 near Heathrow produced two RING-NECKED PARAKEETS as they flew over making this a superb end to the tour.
Next
Previous