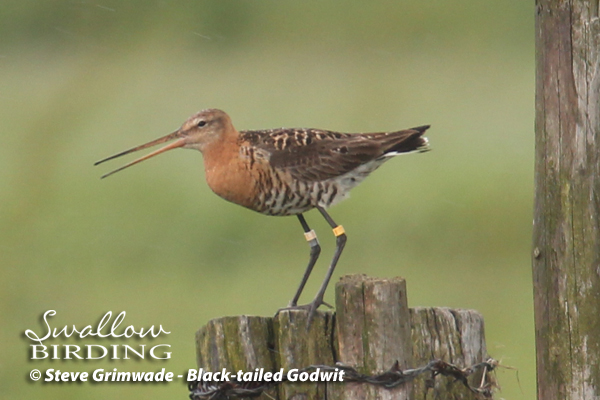 Our day started at the RSPB’s Ouse Washes reserve, where a walk along the riverbank produced singing CUCKOO, YELLOW WAGTAIL and both SEDGE and REED WARBLER, whilst sheltering in the reeds were RED-EYED and AZURE BLUE DAMSELFLIES.

We strolled along to the Cadbury Hide where a muddy pool was drying out and both REDSHANK and GREENSHANK were present as well as good numbers of LAPWING. LITTLE EGRETS were incredibly numerous and a second year male MARSH HARRIER drifted southwards quickly followed by a pair of COMMON TERNS.

Working our way back along the bank, we stopped in several other hides with varying degrees of water levels. They were very productive with small numbers of TEAL, WIGEON, GADWALL and SHOVELER including the latter with small ducklings. A cracking male RUFF was seen on a muddy island as well as AVOCETS, OYSTERCATCHERS and CORMORANTS.

It was then back for lunch in the visitor centre, where we couldn't find any Tree Sparrows despite a good search. The Nene Washes RSPB reserve was our destination for the afternoon session and at first it didn't look good, with a strong wind keeping all the wetland birds low as we walked towards March Farmers. We did however, have some compensation with a RED KITE over our heads.

We relocated to another part of the reserve and this was an excellent move, with a couple more RED KITES drifting over and several COMMON SNIPE seen in flight. We then met up with RSPB coordinator of the Corncrake project and she had just been to the release pens to feed the juvenile Corncrakes ready for release the following week!

BLACK-TAILED GODWITS of the nominate race limosa were present in good numbers and as we walked back we could hear a male CORNCRAKE calling from a bank. We tried searching but the wind was strong and a rain squall sent us running for cover. We then opted to call it a day as the weather was closing in so we headed to Peterbrough Services for coffee and cake before heading for home.

Despite the weather it had been an excellent day with good species seen in some superb habitat, well done RSPB!
Next
Previous