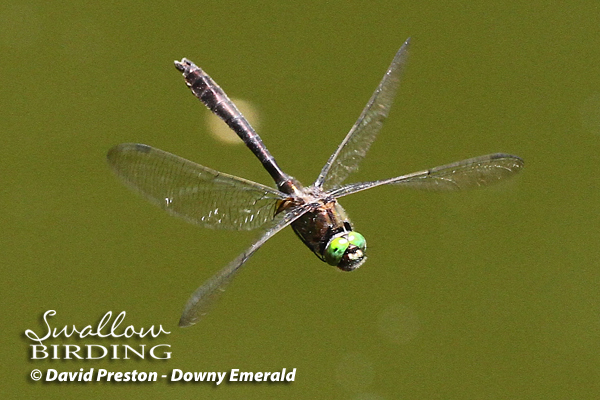 An excellent day down in Surrey for our Bugs and Birds tour. Although conditions were slightly overcast, we had a good start to the day, with several LARGE RED DAMSELFLIES close to Moat Pond. A single RED-EYED DAMSELFLY was seen briefly on the Lilypads but soon disappeared when a family of MALLARDS swam past!

Out on the common we noted good numbers of both LATTICED and COMMON HEATH MOTHS and it wasn't long before we had found both SMALL RED DAMSELFLY and KEELED SKIMMER, two of Thursley's specialities. A singing male TREE PIPIT was seen well and at least four HOBBIES hawked insects over the marshy pools.

A wander through the woods produced both SPECKLED WOOD and MEADOW BROWN BUTTERFLIES and as we came out of the wood, a pair of WOODLARKS gave good views as they flew to some nearby trees. FOUR-SPOTTED CHASER DRAGONFLIES were incredibly numerous over the pools and gave good photographic opportunities for those with cameras.

We then returned to the minibus for lunch and ate it in the shade, as now it had warmed up considerably and after a good break, we checked out the pond again to find EMPEROR and DOWNY EMERALD DRAGONFLIES, both of which gave excellent views. Some good plants were found including MARSH LOUSEWORT, EARLY MARSH ORCHID of the subspecies Pulchella and the variant Ochrantha, HEATH SPOTTED ORCHID, ROUND-LEAVED SUNDEW, BOG ASPHODEL, BOG COTTON, LESSER BLADDERWORT and MARSH ST. JOHNS WORT amongst others.

The wooded areas gave us good views of a pair of COMMON REDSTART and on the marsh were COMMON CURLEW. Some time was spent checking out the pools and eventually we came across a superb specimen of RAFT SPIDER, one of the largest species of spider in the UK, with a male STONECHAT nearby which rounded off an excellent day.
Next
Previous