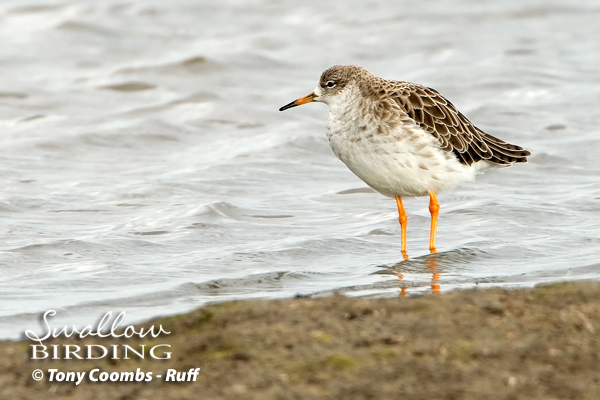 With atrocious weather forecast, we hesitantly headed off to Kent and after a stop, we arrived at Oare Marshes KWT reserve where a little light rain fell. As we walked along the sea wall, large numbers of BLACK-TAILED GODWIT, REDSHANK, DUNLIN, RINGED PLOVER and AVOCET fed. Careful scanning provided us with a smart juvenile CURLEW SANDPIPER alongside DUNLIN for ID comparisons. Small numbers of terns fed along the river and included LITTLE, COMMON and SANDWICH TERN and a few minutes later, a dark juvenile ARCTIC SKUA drifted over before disappearing towards Faversham.

GREENSHANK, WHIMBREL and a brief LITTLE STINT were noted close to Faversham Creek before we spent time in the hide overlooking East Flood. Over 800 BLACK-TAILED GODWITS roosted along with lesser numbers of RUFF, REDSHANK, GOLDEN PLOVER, GREEN SANDPIPERS and a couple of juvenile WATER RAIL thrown in for good measure!

The walk back along the road produced MARSH HARRIER, SPARROWHAWK, COMMON SANDPIPER and two juvenile LITTLE RINGED PLOVER before we had lunch. Then with a few minutes spare we had another look at the LITTLE RINGED PLOVERS and when Steve set up his scope, the first bird he saw was a winter plumaged TEMMINCK'S STINT!

Although difficult to see at times, we had good views as it fed with the two plovers until it flew up and way, although we heard it returned to the same spot later.

With skies darkening we drove towards Canterbury and through torrential rain with things not looking too good, but miraculously the weather cleared just as we arrived and there were only a few spots now. As we left the carpark, a glance at the pager revealed the report of a Spotted Crake at Grove Ferry!

Quickly walking to the viewing ramp we found no other birders present so started searching. Two spangly WOOD SANDPIPERS fed, along with around 20 GREEN SANDPIPERS, 3 SPOTTED REDSHANKS, 2 GARGANEY, SNIPE, LITTLE RINGED PLOVER, COMMON SANDPIPER, GREENSHANK and a BLACK-TAILED GODWIT. Steve soon located the SPOTTED CRAKE feeding in the reeds and the bird was quite territorial as it often chased GREEN SANDPIPERS and SNIPE from its patch.

Delighted with this we walked to the Feast hide, where more GREEN SANDPIPERS were on show as well as two WATER RAILS. In the nearby bushes there were small numbers of warblers including SEDGE, REED, WILLOW WARBLER and CHIFFCHAFF. One of the group had a brief PIED FLYCATCHER close to the carpark. A quick look from the viewing ramp produced several BEARDED TITS and the SPOTTED CRAKE still harassing other birds.

We left the site and once again soon hit the most torrential rain from Kent back into Essex showing how lucky we had been with the weather!
Next
Previous