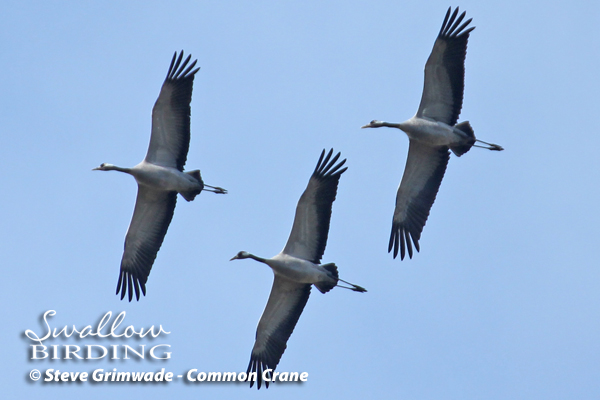 Friday 6th September
We all met at Stansted for our short flight to Malmo which arrived just a few minutes late but we soon collected our bags and were off to sort out the vehicle. Just ten minutes later we had seen our first birds and what good ones to start the tour, when a small party of COMMON CRANE were seen flying over the trees. When we got closer, we could see there were around 50 birds!

After setting up our optics, we walked up to a viewpoint and this gave an excellent view to the north. Large numbers of RED KITE drifted over the woodland and from here we caught a glimpse of a 3rd year WHITE-TAILED EAGLE. It drifted past and landed in a field, where it sat and dwarfed nearby RAVENS.

Some COMMON BUZZARDS were seen and a female MARSH HARRIER flew in front of us to join the multitude of Kites. Two more adult WHITE-TAILED EAGLES were noted over the lakes and another young bird appeared from a long way off before disappearing.

Delighted by our start, we made our way southwards to the coast where we picked up supplies for lunches, and a short while later, we arrived at our accommodation.

After unpacking and a shower we met for our short journey into the local town for dinner. The journey yielded GOLDEN PLOVER and a mixed flock of both CANADA and GREYLAG GEESE. We had a very enjoyable meal in a local restaurant, before heading back to complete the bird list and to go through plans for the forthcoming days. We retired to bed very much looking forward to the next day.

Saturday 7th September
Meeting for breakfast at 6.30am, we set off down to the Falsterbo area, noting both GREYLAG and CANADA GEESE in the roadside fields, as well as parties of wagtails and finches all heading southwestwards. There were plenty of cars parked along the road which meant the local birders were expecting a reasonable morning of migration.

As we unloaded the van, parties of SISKIN and COMMON CROSSBILLS headed west, as well as TREE PIPITS and YELLOW WAGTAILS. Across the golf course, a WHEATEAR perched on a small post and both WHITE and YELLOW WAGTAILS foraged on the golf green. The first SPARROWHAWK of the morning flew over and adjacent to the lighthouse, it became apparent that a large number of SWALLOWS were migrating south.

KESTRELS, SPARROWHAWKS, a single HOBBY and a cracking juvenile HONEY BUZZARD flew over before heading out south over the sea to Denmark and at times there were so many birds in the air you didn't know where to look! EIDER were seen on the sea with large numbers of CORMORANTS flying past, whilst over 800 GREYLAG GEESE came in from the direction of Denmark. A party of around 30 TREE SPARROWS constantly flew around before landing in some wild roses and giving good views.

We wandered down to the point but water levels had risen, so apart from the common wildfowl it was quiet. An adult WHITE-TAILED EAGLE flew southwards and both MERLIN and PEREGRINE were seen briefly. With the wind a brisk southeasterly, we wandered towards the lighthouse for some shelter, when on the path was a pristine SMALL COPPER BUTTERFLY and then a few yards later a QUEEN OF SPAIN FRITILLARY! This handsome butterfly allowed close approach before flying off over the dunes. SPARROWHAWKS were constantly in view and over the lighthouse flew two RED KITES and a COMMON BUZZARD.

After a look at the migration exhibition in the lighthouse, we headed off for coffee and cake. As we were in the throes of parking, a HONEY BUZZARD drifted over which was quite frustrating, not being out of the vehicle. As we tucked in, the warm sunshine was rather pleasant but it was soon off for more raptor watching.

As we arrived, three juvenile HONEY BUZZARDS were noted close-by, as well as the usual SPARROWHAWKS and up to 10 COMMON KESTRELS hovered over the vast habitat. At least four more HONEY BUZZARDS flew over pines at a distance, but we did get better views of an adult male MARSH HARRIER that flew over us. With lunchtime approaching, we headed off to a quiet spot for our packed lunches.

Several SPARROWHAWKS flew close-by and in the horse paddocks we had good views of both YELLOW and WHITE WAGTAILS, before wandering down to the coastal marshes. A SPOTTED FLYCATCHER flitted around some Elders, no doubt taking shelter from strong winds that blew across the flat landscape.

From the watch-point we noted large numbers of BARNACLE GEESE, as well as around 250 GOLDEN PLOVER, SPOTTED REDSHANK, GREENSHANK, RUFF, DUNLIN, GREEN SANDPIPER, RINGED PLOVER, REDSHANK and a couple of AVOCET. COMMON KESTRELS were present and we had good views of a juvenile female MERLIN that sat on the saltmarsh before flying off and disturbing the waders.

As we were about to leave, 4 WHINCHAT were seen perched along the fence lines, then all the birds suddenly lifted when a large female PEREGRINE came in to terrorise the flocks. She made several attempts to catch a bird but in the end came away unsuccessful.

With winds still strong, we headed inland, after a brief stop at the accommodation for facilities. As we drove on, RED KITES and COMMON KESTRELS became more noticeable and on our arrival at an inland lake, we immediately picked up COMMON BUZZARD, MARSH HARRIER, a distant adult WHITE-TAILED EAGLE and a close OSPREY, hovering over the lake.

A scan through the ducks produced four female/juvenile GARGANEY as well as GOLDENEYE, GADWALL, SHOVELER, MALLARD, POCHARD and TUFTED DUCK, although a big surprise was an adult WHOOPER SWAN, consorting with GREYLAGS at the eastern end of the lake.

With time getting on we headed back towards our base, noting several MARSH HARRIER and a few ROE DEER along the way. We then had time for a hot shower and a brief rest before heading out to dinner, which again was very good.

After completing the bird list, we went off to bed once again looking forward to our half day of birding the next day.

Sunday 8th September
We opted for an early breakfast to make the most of the few hours we had left before going to the airport for our flight home. As we pulled onto the back roads we came across a good flock of at least a dozen WHEATEARS and in the next field, a male YELLOWHAMMER dropped in. A distant raptor looking remarkably like a WOODPIGEON turned out to be a male PEREGRINE!

Slightly further along the road, what was probably the same PEREGRINE was perched on a concrete culvert in the middle of the field and around the tree line were around 30 RED KITES. As we turned off onto a track, a herd of FALLOW DEER were seen enjoying the morning sunshine before scampering off into a copse.

Arriving at our parking spot, we scanned the nearest tree line and found hunting HOBBY, RED KITE and a COMMON BUZZARD of the pale ‘Börringe’ morph, which is a local speciality. Several COMMON CROSSBILLS flew over and some TREE PIPIT were spotted.

Once in the woodland it was fairly quiet due to the strong winds, but we persevered and located a couple of northern race NUTHATCH frequenting a tall Beech Tree, and further along the track we found MARSH TIT and a COMMON TREECREEPER. Once out into more open habitat we spotted a dark adult HONEY BUZZARD drifting over and a Hornet's nest was seen just off the track.

Retracing our steps it was still quiet, so we headed off to a good raptor site. Soon after our arrival, a 2nd year WHITE-TAILED EAGLE was seen, along with good numbers of RED KITE, COMMON BUZZARD, MARSH HARRIER and both HOBBY and KESTREL. Scanning of the distant ridgelines yielded several flocks of COMMON CRANES numbering over 200 birds. The last surprise was a cracking juvenile male GOSHAWK that flew past quite quickly, flushing flocks of GULLS and LAPWINGS. With the wind fairly strong, we drove round to another spot where it was more sheltered.

Here, RED KITES and RAVEN were the predominant species and once again we could see a few parties of COMMON CRANES. With time getting on, we drove round to a newly created wetland, where several other birders were present and from here we had some good close COMMON CRANES that were bugling overhead, before dropping over the ridge.

The wetland provided us with four RED-NECKED GREBES, an adult feeding 3 stripy-headed juveniles, GREEN and COMMON SANDPIPERS, SPOTTED REDSHANK and GREENSHANK plus plenty of MALLARD as well as SHOVELER and GADWALL. A juvenile HOBBY hawked low over the water before coming quite close and drifting off on another hunting sortie. A walk along the road gave a clearer view of the northern part of the lake and here we located a winter-plumaged BLACK-NECKED GREBE, a good bird for southern Sweden.

After a spot of lunch, we reluctantly headed off towards the airport via a stop for fuel. Once our luggage was sorted and tripods packed, we were soon checked in and in the departure lounge, where we completed the bird list before relaxing and waiting for our plane to arrive.

The flight took off a few minutes late but arrived on time at Stansted and after passing passport control quite easily, we picked up our luggage and said our goodbyes, after what had been a very enjoyable tour with great company and good birds.
Next
Previous