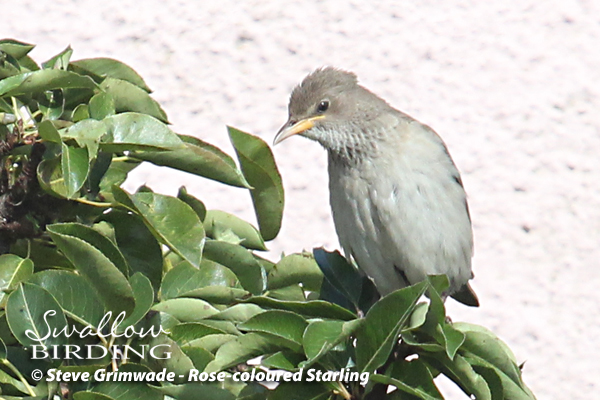 We had a dense foggy start on heading northwards to Suffolk, but once we had stopped for coffee and a bacon roll, the mist started to clear just as we arrived at Leiston. We were soon walking along the bridle way and located the LESSER GREY SHRIKE sitting on a fence post before making several feeding sorties, where it was seen to catch some black beetles. Unfortunately it didn't come too close but it did look good through the scope. A few CHIFFCHAFFS fed in a nearby Elder before we headed northwards once again.

A fast moving HOBBY was seen in Wrentham and a short while later, we arrived at the Sparrow's Nest Gardens in Lowestoft, where a Yellow-browed Warbler had been reported earlier. We heard and saw several CHIFFCHAFFS and as we did a circuit of the area, what was almost certainly the YELLOW-BROWED WARBLER was heard calling in tall Sycamores but was just invisible to see.

A short time later we parked in Caister and within a few minutes there was the 1st winter ROSE-COLOURED STARLING, performing for us as it fed on ripe pears and crab apples in nearby bushes. This scarce migrant attracted a lot of attention from locals who kept asking what we were watching. With the sun warm and bright, we enjoyed lunch by the beach, where offshore we found GUILLEMOT, GANNET, three MEDITERRANEAN GULLS and up to 8 summer-plumaged RED-THROATED DIVERS.

Our final destination of the day was Lynford Arboretum, where a small crowd was gathered looking up at the trees for the reported family party of Two-barred Crossbills. Despite a very thorough search, we managed some excellent views of up to 30 COMMON CROSSBILLS as well as SISKINS and COAL TIT. Despite missing out on these birds, we had enjoyed a thoroughly good day out with some good highlights.
Next
Previous