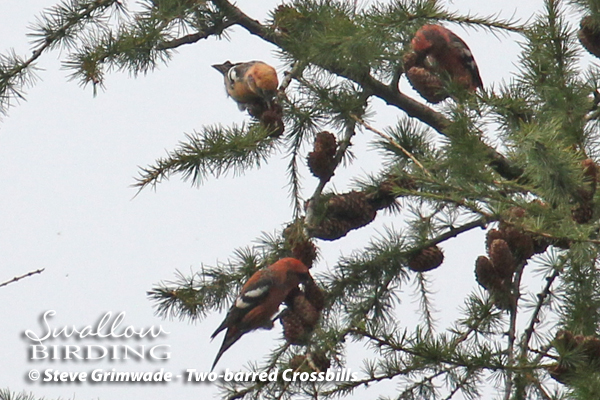 Saturday 5th October
We left Colchester at 6.30am and after a stop for breakfast in Norwich, headed off to Warham Greens on the north coast. It was cloudy on arrival and the sky was alive with the calls of SKYLARKS overhead. Walking along the track we came to a small group watching the copse. We wandered around checking suitable areas and eventually had brief but good views of a RED-BREASTED FLYCATCHER as it flitted around the dead alders, never settling for very long.

The saltmarsh held small numbers of DARK-BELLIED BRENT GEESE and a few GOLDEN PLOVER flew over calling. After getting several brief views of the RED-BREASTED FLYCATCHER we headed off westwards noting a MARSH HARRIER which flew over the A149. As we passed Holkham, a good number of PINK-FOOTED GEESE flew onto the freshmarsh.

Arriving at Titchwell RSPB reserve, the car-park was packed although we did manage to squeeze into a parking space. With some time before lunch we walked out through the fen trail towards Patsy's Pool, where a male RUFF was seen foraging along the edge and out on the mud were a few COMMON SNIPE.

Our stomachs soon got the better of us and we headed off towards the picnic area and enjoyed lunch. Afterwards we walked along the sea wall and spent some time in the Island Hide, finding two juvenile LITTLE STINTS and a juvenile CURLEW SANDPIPER. A single AVOCET fed in the shallows and a scan of the wildfowl produced GADWALL, TEAL, WIGEON, PINTAIL and MALLARDS. GOLDEN PLOVER showed well in the sunlight and other waders included DUNLIN, RINGED and LITTLE RINGED PLOVER, RUFF, TURNSTONE and a small flock of KNOT. A juvenile male PEREGRINE flew through the flock of waders but failed to catch any.

We then began to walk towards the sea and didn't get far when reports of a JACK SNIPE came through and after a quick walk back to Patsy's Pool, we eventually had reasonable views as it 'bobbed' at the back of the scrape. Getting back on track, we spotted a few BEARDED TITS and heard CETTI'S WARBLERS in the reeds close by.

On scrapes next to the path we had outstanding views of GREENSHANK, alongside SPOTTED REDSHANK, BAR-TAILED and BLACK-TAILED GODWITS, three CURLEW SANDPIPERS and a few CURLEW. Plenty of photographs were taken and the light was just delightful.

Eventually we reached the sea where there were small numbers of waders including KNOT, SANDERLING, OYSTERCATCHERS and a few CURLEW. Offshore we noted some juvenile GANNETS and two juvenile ARCTIC SKUAS were seen briefly. With time getting on, we headed back to the vehicle and a short time later, we arrived in Old Hunstanton, our base for the weekend. After checking in we met for a drink and completed the bird list before enjoying a lovely evening meal.

Sunday 6th October
After a good night’s sleep, we met for breakfast which was incredibly enjoyable and set us up for a day’s birding.

Leaving the hotel, we parked just outside Burnham Overy and took a stroll along the footpath leading down to the sea wall. Small skeins of PINK-FOOTED GEESE flew over towards the grazing marsh and along the hedge line were several SONG THRUSH, a couple of possible REED WARBLER and a BULLFINCH which was a nice surprise. A juvenile WHEATEAR gave good views on a patch of dried mud, which later flew onto a bush where it was next to a female REED BUNTING.

A small flock of EGYPTIAN GEESE consorted with GREYLAG GEESE and CURLEWS probed in the damp fields. Reaching the sea wall, our first raptor was spotted in the form of a juvenile MARSH HARRIER which disturbed a flock of feeding BRENT GEESE. On scanning round, a moulting RED KITE was seen flapping slowly across the fields, before gaining height and disappearing eastwards. We got to the sea wall and covered the southern edge of the dunes but apart from a flock of HOUSE SPARROWS and MEADOW PIPITS it was pretty quiet.

As we stopped for a snack break, a REDWING zipped overhead calling, as did a lone HOUSE MARTIN which flew west. We took position overlooking the sea and this proved fairly productive with a single GREAT SKUA that flew east disturbing all the gulls and geese and a pair of COMMON SCOTER flew west. Small numbers of juvenile GANNETS were seen and a summer-plumaged BLACK-THROATED DIVER flew east.

With lunchtime approaching, a walk was enjoyed through the dunes towards Holkham and from here we found another two RED KITES and more COMMON BUZZARDS. Lunch was taken in the warm sunshine and afterwards we entered the pines seeing an increase in the number of passerines. A few CHIFFCHAFFS flitted amongst the Sycamores and a BLACKCAP called from deep cover. We reached the cross tracks and sat down waiting for the birds to come along. This didn't take too long, as a SPARROWHAWK chased a REDWING out onto the marsh before giving up, whilst amongst a roving tit flock we noted COAL, BLUE, GREAT and LONG-TAILED TITS with a couple of GOLDCREST and CHIFFCHAFF for good measure.

From cover we could hear a YELLOW-BROWED WARBLER calling but it remained unseen. We were then joined by the Essex Birdwatching Society members who were enjoying a day trip to Norfolk and it was great to catch up with so many friends. Eventually we had to retrace our steps back to the vehicle where we noted COMMON BUZZARDS, GREEN WOODPECKER and some MARSH HARRIER along the way.

It was great to reach the accommodation to rest our legs after this long walk and a relief to take our shoes and socks off! We met once again in the bar for a drink and to complete the bird list before our evening meal.

Monday 7th October
After a good rest we met for a hearty breakfast before loading up the vehicle and heading off to Choseley Barns. Despite some changes to the area we still managed to see CORN BUNTINGS and YELLOWHAMMERS and along the road were a good covey of GREY PARTRIDGE.

After a couple of stops in the Brecks, producing COMMON BUZZARDS and a single WOODLARK, we arrived at Lynford Arboretum and there were a few birders present around the wooden cabin. COMMON CROSSBILLS flitted overhead and we had good views as they drank from a large puddle within the walls of a nearby house. SISKINS numbered around 50 birds and other species nearby included NUTHATCH, TREECREEPER and FIRECREST.

Changing positions in the arboretum proved fortuitous with us seeing three TWO-BARRED CROSSBILLS feeding in a large tree before they flew off with COMMON CROSSBILLS. Delighted by this we headed off for a hot drink before finishing up at Lackford Lakes.

Here we found a superb JACK SNIPE whilst viewing from one of the hides and it showed reasonably well as it bobbed around feeding. WATER RAILS called from the reedbed and in the woodland we saw TREECREEPER which rounded off a fantastic weekend in Norfolk.
Next
Previous