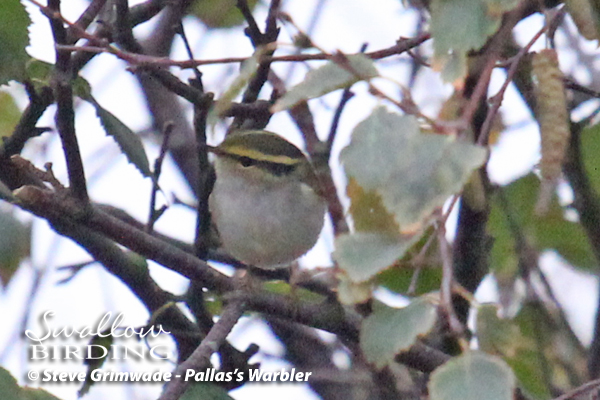 We started the day at Landguard Point where we had excellent views of up to six RING OUZELS that flitted up along the ridge and were seen feeding on the many berries. SONG THRUSHES were present in large numbers and some REDWING was seen. CHIFFCHAFF and BLACKCAPS fed in tamarisks taking advantage of the still, warm conditions.

It was then northwards to Lowestoft and trying to catch up with some of the seabirds that had been seen passing in recent days. GANNETS moved northwards as did a steady passage of LITTLE GULLS. An ARCTIC SKUA flew south, but most exciting was a LEACH'S PETREL that was seen briefly before disappearing and not being seen again! COMMON SCOTERS moved northwards offshore and an adult MEDITERRANEAN GULL flew south.

Moving again northwards we ended up at Winterton and enjoyed lunch near the dunes. Afterwards we strolled to the totem pole and soon met a few birders who put us onto a stunning PALLAS'S WARBLER. This little sprite flitted around in front of us and gave some lovely views including its lemon rump. By now, rain had started to fall so we abandoned a search for a Richard's Pipit that had been disturbed by dog-walkers.

The sky was brighter to the south so Great Yarmouth cemetery was our next port of call. We met some other birders and then spotted a RED-BREASTED FLYCATCHER flitting around a Sycamore overhead, with good numbers of ROBINS for company. An interesting CROSSBILL flew over, calling with a deep chipping sound, very good for PARROT CROSSBILL but it was just too brief to be certain.

Our day concluded at Corton, where we searched for a Great Grey Shrike but there was no sign in the 40 minutes we were there. After some scrummy cake, we headed off for home, delighted with what a cracking day it had been!
Next
Previous