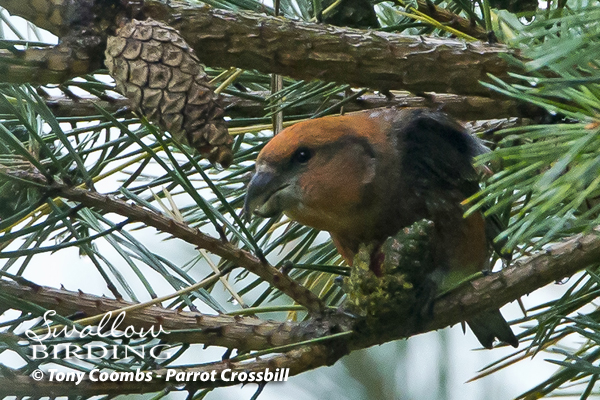 The day dawned very wet and windy as we headed down to Southend and as we left the vehicle, rain poured down and things were not looking too hopeful. Nevertheless, a small group of birders were at the end of the road and within a few minutes, we were delighted to be watching three PARROT CROSSBILLS feeding in a small pine tree. These birds are difficult to see within the UK and despite the bad conditions, we thanked our lucky stars to see them at all!

With the forecast looking better further north, we stopped near Ipswich for a bacon roll and hot drink before moving northwards to Winterton. Rain had stopped by now but the wind was quite strong and made searching for migrants difficult. Reaching the area north of the totem pole we met several birders wandering around looking for the reported Pallas's Warbler. The birches had small numbers of Redpolls and in one tree we were delighted to see both LESSER REDPOLL and MEALY REDPOLL perched side by side allowing excellent comparison of plumage details. GOLDCRESTS, CHIFFCHAFFS and BLACKCAPS were also seen before a bird flew across the dunes into a bush, showing a bright lemon yellow rump, the PALLAS'S WARBLER!

The bird flitted around and kept moving, making viewing frustrating but it did come back to several favoured patches to feed before moving again. Even more frustrating was a white-rumped Redpoll that looked good for COUES' ARCTIC REDPOLL, but it flew away before any further details could be seen.

It was then off for lunch and we moved southwards to Great Yarmouth Cemetery, where good numbers of REDWINGS were seen flying over and a FIRECREST flitted around a small holly tree. We reached a Rowan with plenty of berries and at least two RING OUZELS were seen along with BLACKBIRDS, SONG THRUSH and REDWINGS, whilst a flock of FIELDFARE flew over.

A stop was then made at Gunton, where there was no sign of any reported Yellow-browed Warblers although we did find a tit flock containing BLACKCAP and CHIFFCHAFF. We finished up at Ness Point where a few GANNETS flew south, but it was very quiet so after a spot of cake, we called it a day, heading off home and noting a fine BARN OWL on the way.
Next
Previous