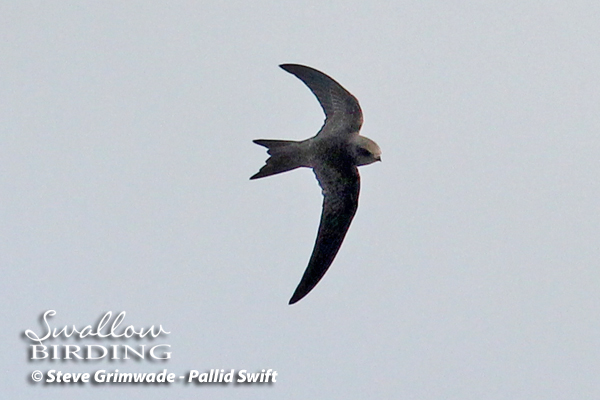 After a stop for breakfast in Norwich, we started off at Cley where a Richard's or Blyth's Pipit had been reported. On arrival, several birders were looking for the bird after it had flown off but despite a good search, it failed to appear. A look out to sea did produce several GANNETS, RED-THROATED DIVERS, GUILLEMOT, RAZORBILL and COMMON SCOTERS whilst the Eye Field held plenty of BRENT GEESE including a leucistic bird, back for its fourth winter.

Moving eastwards along the coast to Cromer we had a bit of luck! Two PALLID SWIFTS had been seen earlier between Sidestrand and Cromer and as we drove along the coast road, we saw a birder walking along the field edge with some purpose. After parking, we took the same track and a few minutes later picked up a distant swift, which was then joined by another, flying over Cromer Golf Course. They were too far to pick out plumage details, but one disappeared and as the other dropped below the skyline, it looked light brown all over.

A short while later we found another swift hawking to the south. This time we had much better views and could pick out the large pale throat, pale secondaries, scaly underparts and languid flight. Delighted by the sightings, we headed back for a late lunch before driving down to Caister on Sea.

We parked and the first group of starlings we saw produced the long-staying ROSE-COLOURED STARLING alongside some COMMON STARLINGS. It flew up onto roof tops before disappearing. A scan of the sea produced up to 6 MEDITERRANEAN GULLS, GANNETS, BRENT GEESE and CORMORANTS.

The day concluded with a walk along the beach at Winterton, where there were no other birders present. As we strolled along, Annette spotted a superb SHORELARK on the edge of the dunes that gave good views before flying to the beach after being disturbed by dog walkers. After a well deserved cuppa, we headed home after what had been a very rewarding day.
Next
Previous