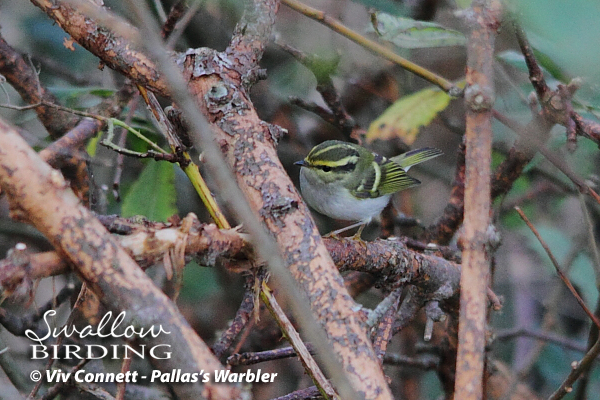 After a long drive through heavy rain, we arrived in Norwich for a breakfast stop. With news of a PALLID SWIFT still at Cromer we set off northwards to blue skies but a keen southwest wind. After a hike up to the lighthouse at Cromer, we were informed that the bird had flown off just five minutes previously!

We decided to head down the coast and eventually arrived in Trimingham, where it wasn't long before we picked up a swift hawking over a distant wood. Slowly but surely it came closer but never quite near enough. We did manage to get it in the scope where the large pale throat, pale secondaries and overall brown plumage could be seen. It flew behind nearby trees and was not seen again.

Opting to head further south, we aimed for Winterton, where a PALLAS'S WARBLER had been seen during the morning. This may have been the bird we had seen two weeks previously which had relocated further south. Reaching a small group of birders, the bird was currently out of view, but before long it was seen feeding in Sycamores. Then it came into a close bush and gave excellent views, calling on occasions.

A walk was then taken along the beach to look for a Shorelark but apparently it had been disturbed by dog walkers and flown off. We enjoyed lunch in the car-park with a welcome cuppa before taking a stroll northwards on the beach. Eventually we came across a superb flock of around 30 SNOW BUNTINGS, which gave good views in the afternoon sunshine.

Our last site was at Ness Point where we hoped to see Purple Sandpipers, but despite a thorough search along the rocks, all we could manage were a few TURNSTONE and plenty of gulls, including a colour-ringed HERRING GULL. With the change in daylight hours, the light dropped quite rapidly so we called it a day and headed home after what had been a good day with some good birds seen.
Next
Previous