WINTER ON THE ISLE OF SHEPPEY – Sunday 10th November 2013 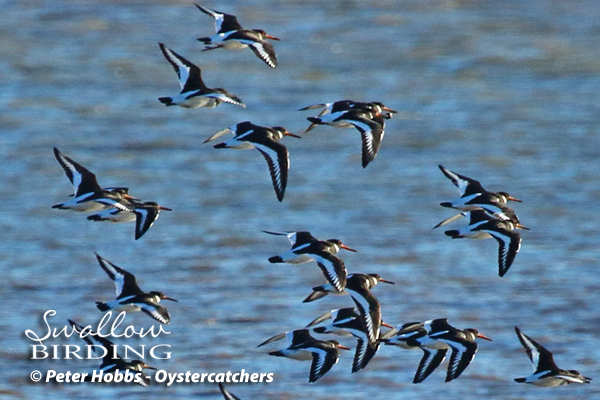 With clear, bright and cold conditions, we made our way down to the far end of Sheppey for a visit to the Harty Ferry Inn! Not for a cold drink but to catch up with a long-staying Cattle Egret that had been frequenting the saltmarsh. We found a few LITTLE EGRETS as well as MARSH HARRIER, BRENT GEESE, AVOCET, 2 RED-BREASTED MERGANSER and good numbers of REDSHANK and OYSTERCATCHERS. Just as it seemed our luck was out, the CATTLE EGRET was spotted behind an earth bank and gave reasonable scope views as it preened. Delighted by this, we relocated to the raptor watchpoint on Harty Marshes.

A cold wind was blowing from atop the mound but despite this we saw up to 10 MARSH HARRIER, 4 COMMON BUZZARD and KESTREL. A GREY WAGTAIL flew over our heads and nearby a LESSER BLACK-BACKED GULL patrolled the fields looking for breakfast.

We changed viewpoints and this proved a good move, with excellent views of a male MERLIN perched on a post and a very pale COMMON BUZZARD in the bush next to it. More MARSH HARRIERS were seen as well as a couple of SPARROWHAWK. At Capel Fleet, a small group of TEAL swam up the western end and out on the fields we saw a large flock of MUTE SWAN.

With our stomachs rumbling, we stopped for lunch at Leysdown where the tide was slowly coming in. From the van we had good views of BLACK-HEADED, COMMON and HERRING GULLS with plenty of OYSTERCATCHERS on the shoreline. A small flock of TURNSTONE flew close in along with a SANDERLING and a couple of RINGED PLOVER. Using the van as shelter, we saw BAR-TAILED GODWIT, KNOT, GREY PLOVER, REDSHANK and CURLEW on the water’s edge.

We then drove down to Shellness NNR where we took a walk along the beach. Thousands of OYSTERCATCHERS roosted at the far end and out on the sea were a large flock of MALLARD, but diligent searching produced a flock of COMMON SCOTER and several RED-BREASTED MERGANSER.

Out on the marshes were a large flock of BRENT GEESE feeding on flooded fields along with CURLEW and LAPWING. With an hour or so of daylight remaining, we headed down to Elmley NNR where we had good views of a couple of BARN OWLS roosting. A female MERLIN flew around us and out on the reserve were more MARSH HARRIERS, FOX, WIGEON, TEAL, PINTAIL and a mixed flock of CANADA and GREYLAG GEESE.

We rounded off the day with a confiding LITTLE OWL, giving good views as the light faded.
Next
Previous