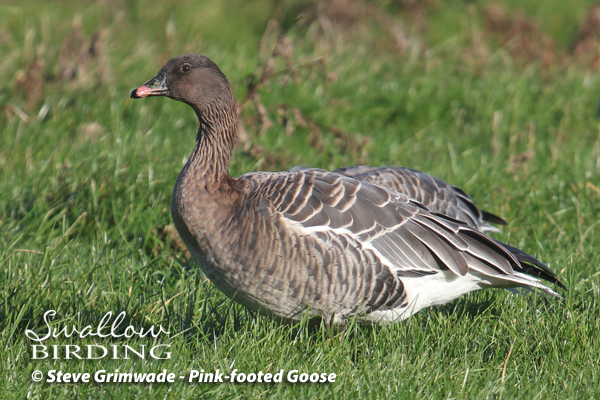 As we travelled northwards to Norfolk, the weather became clear and bright with little wind which was ideal for our birding day. We pulled up in Cley Beach carpark and immediately noticed a large flock of GOLDEN PLOVER roosting on the open grass. We spent some time looking out to sea which produced RED-THROATED DIVERS, GANNETS, GREAT CRESTED GREBES and a single FULMAR flying west.

With the sun in our eyes, we moved position close to the Eye Field and a Norfolk Wildlife Trust volunteer told us about a BLACK BRANT that he had seen in the DARK-BELLIED BRENT GOOSE FLOCK. We soon located this strikingly marked bird as it fed constantly allowing good scope views. Out on the marshes were large numbers of WIGEON and a few SHELDUCK feeding in the scrapes. A MARSH HARRIER was also seen briefly. As we left the beach and drove along Beach Road, a pair of STONECHAT gave close views as they perched on bushes close to the bank.

After a brief comfort stop at the visitor centre and a quick scan that found us CURLEW, BLACK-TAILED GODWIT and PINTAIL, we drove westwards to Holkham. As we enjoyed lunch we had close views of hundreds of PINK-FOOTED GEESE, as well as a few DARK-BELLIED BRENT GEESE. The good weather had encouraged large numbers of people out, but once we had got out towards the water’s edge it was much quieter. It soon became apparent that there were large numbers of COMMON SCOTER out on the sea and they showed well in the sunshine. The flock took off and amongst them were around 15 VELVET SCOTER! A 1st winter drake COMMON EIDER was seen out in the bay as well as GREAT CRESTED GREBES, RED-BREASTED MERGANSERS and RED-THROATED DIVER.

With the tide coming in rapidly, we were about to retreat when two GREAT NORTHERN DIVERS were found feeding in the breaking waves to the east. These spent more time underwater than above but we all managed to get onto them as they fed. Some time was spent in the Washington Hide, where we saw at least five MARSH HARRIER and a few COMMON BUZZARDS. Occasionally there was panic amongst the WIGEON, LAPWING and CURLEW out on the marsh but apart from a SPARROWHAWK we couldn’t see any other culprits.

On Salt’s Hole we found LITTLE GREBES and a drake GOLDENEYE consorting with a small number of WIGEON. We rounded off the day at Lady Anne’s drive where we found a distant BARN OWL quartering the grassland but then another appeared very close, putting on a good show which rounded off the day nicely!
Next
Previous