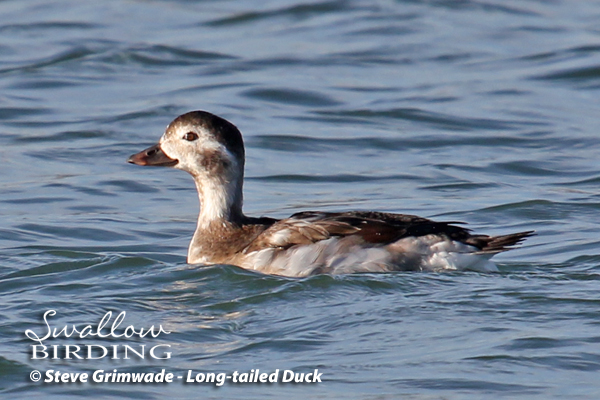 After rain the previous day, we all met at West Mersea in clear and bright conditions for our four hour boat trip on the River Blackwater. Small parties of BRENT GEESE fed adjacent to the slipway and up to 10 TURNSTONE were on the jetty.

Once aboard, we slowly headed along the channel and almost immediately came across a female LONG-TAILED DUCK that was pretty close to the boat and gave good views as we cruised past. In Salcott Channel there were small numbers of RED-BREASTED MERGANSER and GOLDENEYE but the real highlight were three GREAT NORTHERN DIVERS swimming together, which were fantastic!

Due to wildfowling activity further along the creek we turned round and headed off towards Tollesbury. A mixed flock of GREY and GOLDEN PLOVER were roosting on the saltings as we entered Tollesbury Creek and around 100 AVOCET flew past in several flocks. A male HEN HARRIER flew across the channel before hunting over Shinglehead Point. To our surprise we found another two GREAT NORTHERN DIVERS and there was a distant female SMEW briefly in the distance.

MARSH HARRIERS featured in reasonable numbers as they moved off from their roosts on RSPB’s Old Hall Marshes causing havoc amongst the waders. As we motored westwards along the coast we spotted a distant PEREGRINE near Bradwell Power Station and on the more open river we began to see plenty of GREAT CRESTED GREBES.

At Roll’s Farm we found a BLACK-THROATED DIVER in with a flock of GREAT CRESTED GREBES which gave reasonable views in the choppy water. As the tide rose, we continued on towards Osea Island which was rather quiet with four COMMON SCOTER, PINTAIL, SHELDUCK and both WIGEON and TEAL being of note. We took these quieter times to enjoy a warming cuppa.

Retracing our steps found us two COMMON BUZZARDS near Roll’s Farm and several flocks of KNOT flew past us. A male HEN HARRIER flew from the north shore of the Blackwater over to the south shore and may well have been the bird encountered earlier.

Off West Mersea we came across a party of roosting SANDERLING along with OYSTERCATCHERS and CORMORANTS. Another look in Salcott Channel produced a single GREAT NORTHERN DIVER but more interesting, a SHAG that had been colour ringed (I am waiting for details to come back from the ringers).

A female HEN HARRIER was hunting over the saltings and gave good views as it hunted waders. As we neared West Mersea, the LONG-TAILED DUCK was still present and a single GREAT NORTHERN DIVER was adjacent to Packing Shed Island. We rounded off the trip with a brief look along the Strood Channel, where we found a small flock of RUFF and a summer plumaged BAR-TAILED GODWIT roosting.

It was a great trip with plenty of good birds, along with great company!
Next
Previous