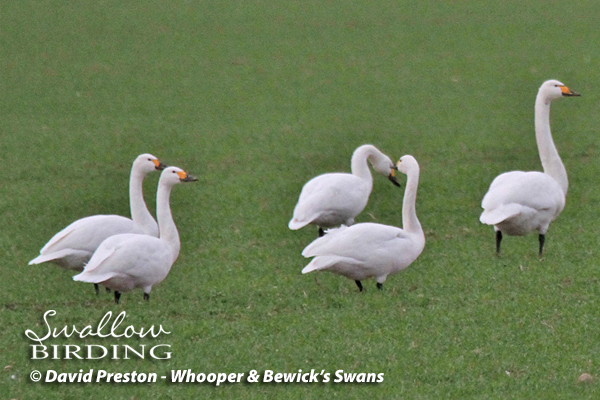 Our first day trip of the year started off in south Suffolk with a visit to a windy and wet Bawdsey Pits where we picked out a female SCAUP amongst TUFTED DUCK, WIGEON, TEAL, GADWALL and MALLARD although the wind and rain made viewing difficult.

Moving northwards to North Warren RSPB reserve, it was pretty quiet apart from a couple of MARSH HARRIER, SPARROWHAWK and a small party of BRENT GEESE. We struck lucky at nearby Sizewell by spotting a GLAUCOUS GULL from the car park! It showed well amongst throngs of large gulls and good numbers of KITTIWAKES.

The weather had improved significantly by now and as we arrived at Pakefield, there was even a glint of sunshine! As we walked down the steps, a flock of around 60 SNOW BUNTINGS flew past after being disturbed by numerous dog walkers. Whilst watching these delightful birds we were treated to a first winter and two adult MEDITERRANEAN GULLS flying along the beach.

At nearby Lake Lothing a KINGFISHER flew across the docks, but the best bird was an adult SHAG seen perched on the side of a boat. It was then up to Ness Point where after a short walk we had point blank views of 12 PURPLE SANDPIPERS on the rocks. Conditions here were very wild with waves crashing over the rocks, sending spray everywhere.

With lunchtime approaching we headed to Waveney Forest and tucked into our food on arrival. We then took a walk down to the viewpoint and it didn't take long to find the long-staying ROUGH-LEGGED BUZZARD flying low over the fields with an entourage of gulls and Corvids. Although distant, we watched it fly from gate post to gate post. Otherwise, it was pretty quiet although nearby woods held good numbers of COAL TIT.

By now the weather had turned cloudy and very overcast, but luckily without rain, as we opted to head over to Acle in search of Common Cranes. Despite driving slowly past, we failed to locate these elegant birds, although a few minutes later we found around 80 BEWICK'S and 21 WHOOPER SWANS along with 32 EGYPTIAN GEESE.

We rounded off the day with a drive around the Horsey area, the best birds being a good flock of PINK-FOOTED GEESE close to the road. After a slice of cake, we headed for home and although the rain had started to fall heavily, we had managed a good day!
Next
Previous