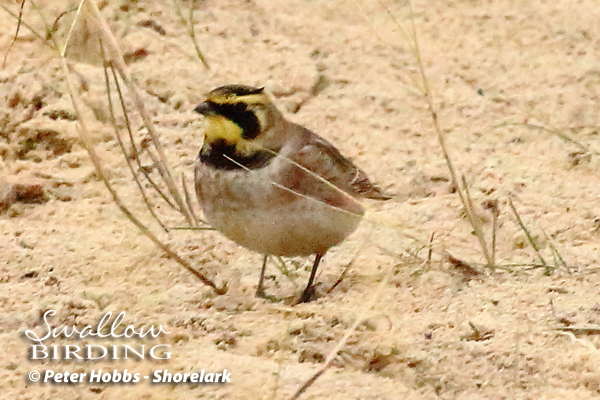 The weather started cold, dry and bright which caught us by surprise after all the recent rain and wind. Our first port of call was Slaughden on the Suffolk coast where a scan out to sea saw us locate both COMMON and around 9 VELVET SCOTERS, the latter seen mainly in flight. Around Martello Tower a flock of 9 ROCK PIPITS flew about and gave good views as they perched on aerials.

From here we drove the short distance to North Warren RSPB reserve where around 15 WHITE-FRONTED and a single BARNACLE GOOSE were present on the fields. The pager reported an Iceland Gull at nearby Sizewell but apparently it had flown off just before we arrived. Despite a thorough search, we only managed to find good numbers of KITTIWAKES around the outfalls.

At nearby Pakefield, a flock of around 50 SNOW BUNTINGS were seen flying around immediately upon our arrival but we obtained much better views of them as they fed on the beach. Despite being flushed by numerous dog walkers, they returned to a favoured spot to feed. Also in the area were 3 MEDITERRANEAN GULLS.

A look at Lake Lothing only produced small numbers of CORMORANTS so we visited Ness Point to find Police cars and Coastguards swarming the area. Apparently a fishermans gear was found unattended and it was assumed that he had been swept away by the sea. Luckily the fisherman turned up later in the day and the search was called off! There was no sign of any Purple Sandpiper in the area but disturbance was probably the main factor.

With our stomachs rumbling, we had lunch in Waveney Forest before walking down to the raptor watchpoint where we soon located a ROUGH-LEGGED BUZZARD perched on a fencepost. Also in the area we noted two PEREGRINES, COMMON BUZZARD, MARSH HARRIER and a KESTREL that did quite a job of looking like a Merlin!

With the weather now clouding up, we drove to Great Yarmouth in search of some reported Shorelarks. It was a large area to cover, but as we walked through the sand dunes, two small larks flew past and we could see a flash of yellow on them. They joined a couple of SKYLARKS and disappeared to the north. As we combed the dunes in search of them, they suddenly appeared a few metres in front of us. The SHORELARKS then put on quite a show as they silently fed before flying off.

With some time left, a visit was made to Ludham where we had outstanding views of both BEWICK’S and WHOOPER SWANS along with a flock of 33 EGYPTIAN GEESE. A drive was taken around the Horsey area but apart from PINK-FOOTED GEESE, MARSH HARRIERS and COMMON BUZZARD it was rather quiet. Despite this we had enjoyed a good day with plenty of quality birds.
Next
Previous