WINTER BIRDING ON THE ISLE OF SHEPPEY - Saturday 11th January 2014 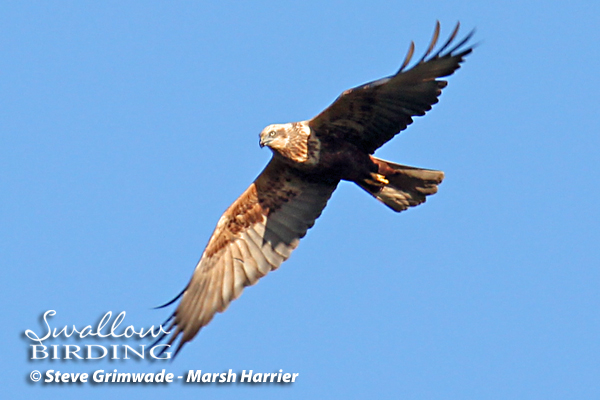 After early rain, we arrived at Leysdown on the Isle of Sheppey to find perfect conditions albeit with a cool NW wind. With the tide starting to recede, we noted a small number of SANDERLING and TURNSTONE flying past, some of which landed on the shoreline. Good numbers of GREAT CRESTED GREBE were seen offshore and we picked up the first of many RED-THROATED DIVERS offshore. By the time we left the area we had seen well in excess of 100 birds, mostly in flight but some closer. A fine BLACK-THROATED DIVER flew past before heading into the Thames Estuary.

We moved south to the Swale National Nature Reserve where another look at the sea provided us with several large flocks of CORMORANTS flying into the Swale and around 100 MALLARD bobbed around on the open water, after being displaced by wildfowlers. On the flooded fields, a large flock of DARK-BELLIED BRENT GEESE, CURLEW, LAPWING and STARLING fed until disturbed by a PEREGRINE that sat in the middle of the field! COMMON BUZZARD were present in good numbers and we had good views of a HOODED CROW alongside the more common CARRION CROW. An escaped HARRIS HAWK got the pulse going briefly as it flew low westwards, being harassed by an entourage of Corvids. MARSH HARRIERS were always in sight as they took advantage of the good conditions in which to feed.

A small party of WHITE-FRONTED GEESE were seen very distantly before we retraced our steps and headed off to Elmley National Nature Reserve for lunch. On our way in, a nice flock of RUFF were good to see and after some welcome food and drink we set up position overlooking the reserve, from where the light was just perfect. Thousands of GOLDEN PLOVER, LAPWING and STARLING were present on the marsh and soon took flight if a MARSH HARRIER got too close.

With a few hours left of daylight, we drove round to Harty Ferry to check out the raptor roost. As we parked, a small party of CORN BUNTING gave excellent views in some brambles and a 360 degree scan produced 6 COMMON BUZZARD, 8 MARSH HARRIER and 3 KESTRELS. We enjoyed excellent views of an adult female HEN HARRIER as she flew westwards. A SPARROWHAWK added to our raptor tally and a GREEN SANDPIPER flew over our heads. We stayed until dusk but sadly there were no sign of Barn Owls. After a welcome slice of cake, we headed towards home after what a been a really good day.
Next
Previous