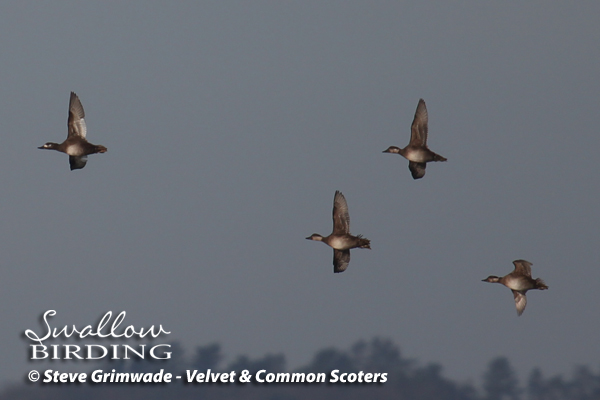 We met at West Mersea just as the sun was rising and although cold and frosty, the light was simply amazing! With an hour or so before high tide there were already waders accumulating along the foreshore, the majority being GREY PLOVER and REDSHANK. As we motored along Salcott Channel we picked out a female LONG-TAILED DUCK sitting amongst LAPWING on the shoreline which looked strange to say the least. Small numbers of RED-BREASTED MERGANSER flew ahead of us and due to wildfowler activity there were lots of waders flying around.

We left the shelter of the channel and headed round towards Tollesbury and we hadn't gone far when we spotted a colour-ringed SHAG sitting on a buoy. We had first come across this bird back in December on a previous trip and after discussion with the ringer, we found out this bird was ringed as a nestling on the Isle of May in Scotland in 2012.

The tide was still rising as we moved off along the north shore noting a single SLAVONIAN GREBE in the process, as well as the more common GREAT CRESTED GREBE. Three dark ducks flew past us and getting our bins on them, we could see white on the secondaries of one of them, wow a VELVET SCOTER, alongside two female COMMON SCOTER. Delighted by this we carried onwards noting small numbers of RED-BREASTED MERGANSER and GOLDENEYE as well as three female and a male COMMON EIDER just off the western end of Tollesbury Wick.

As we neared Goldhanger, large numbers of gulls and CORMORANT were feeding and this in turn attracted plenty of GREAT CRESTED GREBE. Another SLAVONIAN GREBE was seen briefly in flight and with high tide now turned we opted to visit the sheltered area around Mayland Creek.

There were lots of waders roosting on the saltmarsh as we entered the creek including RINGED PLOVER, GREY PLOVER, REDSHANK, CURLEW and DUNLIN. And with the water much calmer, we enjoyed a warming drink with a slice of Chocolate cake!

Moving round the southern side of Osea Island was a good move because as we neared the eastern end we disturbed a small flock of duck, clearly 7 COMMON SCOTER and one female VELVET SCOTER. They gave reasonable views as they wheeled around before heading towards Goldhanger.

With time getting on, we motored into the wind and headed to the sheltered waters of Salcott Channel hoping the wildfowlers had departed. By now, we had attracted a small mixed flock of HERRING and GREAT BLACK-BACKED GULLS and then above us, we saw a winter plumaged KITTIWAKE! Steve quickly grabbed a spare slice of cake and threw bits over the side to attract it back in, which worked and we all had good views. We also noted a colour-ringed Herring Gull amongst the melee of birds.

The channel was still quiet as we entered it with just RED-BREASTED MERGANSERS and GOLDENEYE being of note. As we headed back to the mooring a summer plumaged BAR-TAILED GODWIT roosted with winter plumaged birds, looking very obvious.

We left the boat after what had been a good four hours with plenty of species seen with some good quality ones at that!
Next
Previous