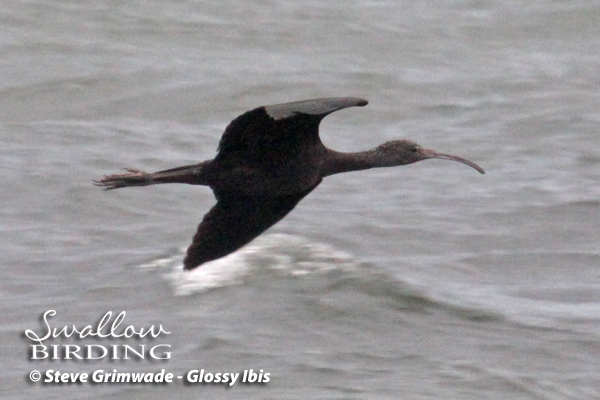 We started the day down at the fishing boats hoping to get some shelter from the very strong south-westerly winds. There were large numbers of birds offshore, the most common being GUILLEMOTS. Some of these were in summer plumage and often gave good views as they fed close to the shore. Peter picked out a cracking juvenile GLAUCOUS GULL that landed on the beach in front of us giving excellent views as it bullied other gulls.

RED-THROATED DIVERS, CORMORANTS, KITTIWAKES and large numbers of both HERRING and GREAT BLACK-BACKED GULLS were seen before we headed off towards the trapping area.

On reaching it we realised what a large area of scrub it was but did our best to relocate the previously reported HUME’S YELLOW BROWED WARBLER but although we heard the bird call from deep inside the thickets, despite waiting a fair time, it just didn’t show.

With lunchtime approaching we took a walk to the Power Station just as a wintry squall went through, with ice hitting you at full pelt which was painful! Managing to find shelter behind the hide, we found four LITTLE GULLS fighting their way over the waves, as well as KITTIWAKE, RED-THROATED DIVERS and GANNETS.

It was then a drive round to the visitor centre for lunch where we noted two GREAT WHITE EGRETS along the way as they sought shelter on the ARC Pit.

After a welcome lunch we drove back to the ARC Pit and on our way stopped by Boulderwall Farm where we found a mixed flock of both TREE and HOUSE SPARROWS along with REED BUNTINGS and CHAFFINCHES. From the hide on the ARC we located up to four female SMEW as well as SPARROWHAWK, GOLDENEYE, WIGEON , MARSH HARRIER and a calling WATER RAIL.

We then walked along the road to New Diggings where another GREAT WHITE EGRET, GREAT CRESTED GREBES, 2 female SMEW and a distant BLACK-THROATED DIVER were seen. Black skies sent us scuttling back to the van before heading down to the centre for a warming cuppa.

Whilst enjoying coffee and a slice of ginger cake in the warmth, Steve spotted a GLOSSY IBIS flying past which we all managed to get on before it disappeared south. Then looking up, he spotted a diver flying past and after getting a good look we could see it was a BLACK-THROATED DIVER.

With the light going, we went down to one of the hides where a female GOOSANDER was seen with at least one female SMEW. As we headed back, the heavens opened and we got slightly damp to say the least! Despite poor weather throughout the day, we managed to see some very good birds.
Next
Previous