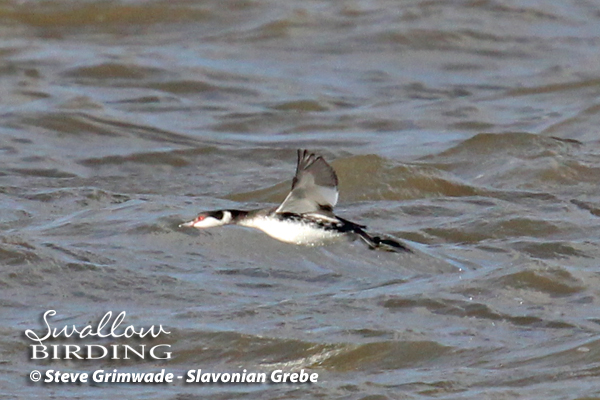 We all met at West Mersea for our four hour boat trip out on the River Blackwater. The weather was pretty good throughout considering the gales and rain that had battered the country recently.

As we motored out from the quay, small numbers of LITTLE GREBE were seen amongst the boats and a few BAR-TAILED GODWIT flew over giving good views. A massive flock of GOLDEN PLOVER and LAPWING were seen flying over Copt Hall after being disturbed by a COMMON BUZZARD and MARSH HARRIER. Salcott Channel held plenty of WIGEON and BRENT GEESE whilst on the more open water we found a flock of 13 RED-BREASTED MERGANSER. The highlight here was a female LONG-TAILED DUCK which although quite wary, gave us reasonable views as it dived close to the shore.

Moving round towards Tollesbury, we found our first SLAVONIAN GREBE of the trip, the light showed the white face and dark cap perfectly and a winter plumaged GUILLEMOT was quite close to the boat. Further up into Tollesbury Creek we found two SLAVONIAN GREBES along with GOLDENEYE and RED-BREASTED MERGANSERS. The wader display here was amazing with GREY PLOVER, KNOT, DUNLIN, BAR-TAILED GODWIT, REDSHANK and CURLEW all wheeling around in the sunlight as the tide covered their roosting places.

As we left the shelter of the creek a RED-THROATED DIVER flew past heading east and then another GUILLEMOT was seen close by. It was a little choppy as we motored westwards which gave us time for a cuppa to warm up. Off Roll’s Farm we found two SLAVONIAN GREBES, one of which flew past the boat.

Two COMMON SCOTER were seen distantly as was a distant diver that looked very much like RED-THROATED. Yet another GUILLEMOT was seen near Osea Island and the northern side of the island was alive with PINTAIL, WIGEON, TEAL, SHOVELER and a few MALLARD.

GREAT CRESTED GREBES were very much in evidence here and CORMORANTS fed in small groups. The wind had dropped considerably when we rounded Osea Island and with the sun on our backs, it was just wonderful. We then headed to the deep water channel of the northern side of Osea where we caught sight of a VELVET SCOTER in the company of a COMMON SCOTER but unfortunately they flew too far west for us to catch up with them.

Heading back, we kept towards the Bradwell side of the river which gave us brief views of a BLACK-THROATED DIVER flying out of the river.

We had a quick look in Salcott Channel but it was rather quiet so we headed back to the quay where we said our goodbyes after what had been a good trip with some good birds seen.
Next
Previous