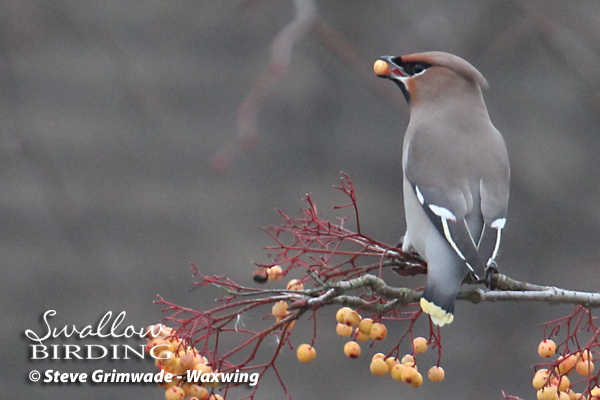 Our day started with a visit to Ipswich and immediately we located three WAXWINGS sitting in a tree along a residential street. Eventually they came down to feed in a Rowan before flying back up to the tree. Delighted by this, we moved on and headed to North Warren RSPB reserve where a large flock of geese were present on the North Marsh. A scan through these produced a large flock of feral BARNACLE GEESE along with EUROPEAN WHITE-FRONTED and two GREENLAND WHITE-FRONTED GEESE. Also present was a CANADA GOOSE that we were told was of the smaller races but with the birds being distant we decided to get closer.

After walking along the track dividing the marsh we eventually had really good views of all the geese, but on looking at the Canada Goose it looked just like other birds seen around the UK and nothing small about it at all! The GREENLAND WHITE-FRONTS showed much better and also in the area were PINTAIL, BLACK-TAILED GODWITS, MARSH HARRIER and large numbers of LAPWING.

A few minutes later we were at Sizewell where the wind still blew strongly as we walked along the embankment bordering the power station. We looked for Black Redstart to no avail but did have a male PEREGRINE hunting over the power station before we decided to check out the sea instead. Large numbers of GREAT BLACK-BACKED GULLS and HERRING GULLS were seen along with a few KITTIWAKES and COMMON GULLS.

A check back at the power station proved beneficial with a pair of BLACK REDSTARTS flitting around the walls of the station giving good scope views. It was then off to nearby Minsmere RSPB reserve where we had lunch.

Afterwards we had a look at the feeders which gave us COAL, BLUE, GREAT and MARSH TITS before we moved on to Bittern Hide noting a small party of SISKINS along the way. The strong wind made viewing very difficult and the best we managed were two MARSH HARRIERS. Island Mere Hide was more productive with six MARSH HARRIERS and three SNIPE, then with David spotting a stunning OTTER that came out of the water in front of the hide, to be flushed by a SNIPE before disappearing from view – wow!

We were so happy to get such excellent views of this scarce mammal that we headed to the tearoom for a celebratory cuppa. With some time remaining, we visited a site where a large flock of Brambling had been reported but had no luck. The day concluded at Shingle Street, where we were treated to a flying SHORT-EARED OWL in the sunlight over nearby fields. As we left at dusk, another bird was seen sitting on fence-posts along the road and we crept nearer in the vehicle to get really good views which rounded the day off nicely.
Next
Previous