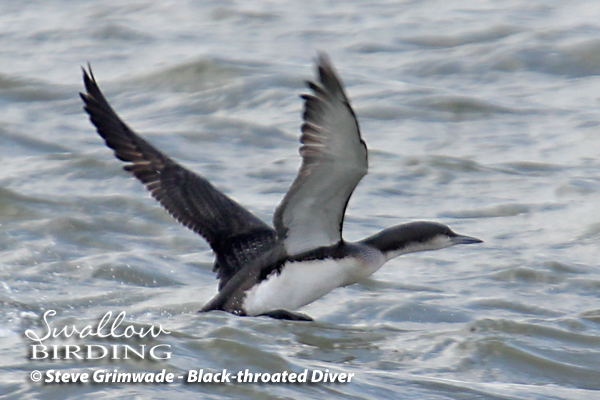 We met on the quay ready for our boat trip on the River Blackwater. The foreshore produced small numbers of BRENT GEESE, REDSHANK, TURNSTONE, HERRING and BLACK-HEADED GULLS. From the quay we motored towards Salcott Channel noting several LITTLE GREBES, GREY PLOVER, DUNLIN and a few BAR-TAILED GODWITS along the way. The channel itself held good numbers of RED-BREASTED MERGANSER several of which gave close flybys. Those that stayed on the water could be seen displaying which showed that spring is just round the corner!

Thousands of GOLDEN PLOVER and LAPWING were frequently seen as they were disturbed by up to 5 MARSH HARRIERS over Old Hall Marshes RSPB reserve. WIGEON and TEAL could also be seen along the channel.

Our next port of call was the Tollesbury Channel where the very high tide had pushed large numbers of waders onto both Little and Great Cob Islands. The majority of the birds were GREY PLOVER along with BAR-TAILED GODWITS, DUNLIN, KNOT and OYSTERCATCHERS. Around 150 AVOCETS could be seen in two flocks in the creek and yet more RED-BREASTED MERGANSERS were observed.

The more open water of the river produced our first RED-THROATED DIVER of the day with another flying past a few minutes later. Carrying on along the north shore of the Blackwater we reached Roll's Farm and here were two winter plumaged SLAVONIAN GREBES, one of which flew off giving reasonable flight views.

In mid-channel there were good numbers of CORMORANTS taking advantage of the large number of Herring currently in the estuary. In the sheltered northern shore were a few PINTAIL along with MALLARD, WIGEON and TEAL. The area just to the west of Goldhanger produced two more SLAVONIAN GREBE which were good to see.

Moving round to the southern edge of Osea Island proved productive with a GREAT NORTHERN DIVER which showed well and didn't even flinch when a Police speedboat came speeding past. More RED-BREASTED MERGANSERS were frequenting the sheltered waters and in the sun it felt quite wonderful.

Back mid-channel we caught up with a couple more RED-THROATED DIVERS and over near Bradwell Marina we picked out what looked like a darker bird which on closer inspection turned out to be a stunning BLACK-THROATED DIVER. It gave good views showing all the relevant features including the large white wheel arch. Eventually it flew off towards Mersea so we headed to the southern shore where yet more GREAT CRESTED GREBES were on the water. With time running out we motored back into the harbour noting a boat full of roosting TURNSTONES along the way.

We said our goodbyes to Ray our skipper after what had been a cracking trip with some good birds seen and with the bonus of good weather!
Next
Previous