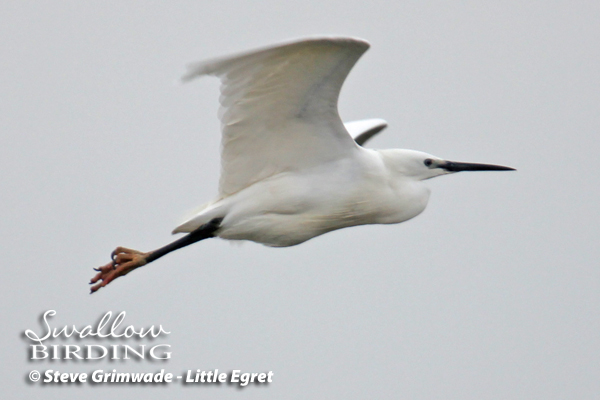 Monday 31st March
The group met in Basildon and soon after setting off, we came up against heavy traffic following an accident so we diverted through Brentwood, finally ending up on the M25. Along the northern stretch things improved and we came across three RED KITE soaring over the road, a good start to the trip!

Soon we got onto the M4 towards Reading and several more RED KITE were noted along with a couple of COMMON BUZZARD. After a coffee stop at Reading which was very welcome indeed, we carried on through Bath arriving at Chew Valley Lake around lunchtime. The dam end of the reservoir held a good number of GREAT CRESTED GREBE, SHELDUCK and MALLARD and a large hatch of Chronomid midges which provided food for the many BLACK-HEADED and COMMON GULLS. After our lunch we checked out the bushes and trees and succeeded in finding a singing male GOLDCREST and CHIFFCHAFF.

We then went on to Herriotts Bridge where the first bird we saw was a BLACK SWAN amongst the many MUTE SWANS. A scan of the lagoon produced an unexpected female RED-BREASTED MERGANSER which was seen with a small flock of TUFTED DUCK. Other species included LESSER BLACK-BACKED GULL, POCHARD, TEAL, GADWALL, HERRING GULL and a pair of BARNACLE GEESE. Whilst scanning the tree-line we found a perched KINGFISHER giving distant scope views.

Our next stop was Heron's Green Bay and we hadn't even got out of the van when a pair of GOLDENEYE were seen close by. GREAT CRESTED GREBES displayed and we also found PINK-FOOTED GOOSE, LITTLE EGRET and the small pool next to the road yielded COMMON SANDPIPER, TEAL and GADWALL.

We returned to the dam for a cuppa which went down very well indeed. A final scan of the reservoir produced two SAND MARTINS hawking over the water and another look at the trees produced SONG THRUSH perched up in full view as well as GOLDFINCH and CHAFFINCH.

We arrived at the hotel in good time and after checking in, spent some time relaxing before meeting for dinner. The evening meal was very good and we went to bed looking forward to the following day.

Tuesday 1st April
We awoke to find foggy conditions although the forecast, to soon clear, sounded promising. After a hearty breakfast we drove through farmland to the Avalon Marshes, which was reasonably clear of mist. We were greeted by a singing male WILLOW WARBLER perched on top of a Willow and across the road, a CHIFFCHAFF sang.

A few yards further on, a male BLACKCAP skulked in some Honeysuckle and eventually showed well in an adjacent Alder. A KINGFISHER flashed across the path and flew over a couple walking along who were completely oblivious to it. Through the mist we spotted a male MARSH HARRIER displaying and calling above our heads and indulging in its roller-coaster display flight.

As we wandered along the path several singing male CETTI'S WARBLER were heard and one showed briefly, along with several LONG-TAILED TITS. In the reed-bed close to the path we heard a calling WATER RAIL although it remained hidden from view.

We reached a drained lagoon which was alive with birds, although unfortunately the area was disturbed as a RSPB vehicle came through and flushed everything! Luckily the birds came back including two stunning male GARGANEY and around 65 BLACK-TAILED GODWIT in varying degrees of plumage.

Good numbers of duck were present including SHOVELER, TEAL, POCHARD, TUFTED DUCK, MALLARD, GADWALL and a male WIGEON. By now, the sun had broken through and both COMMON BUZZARD and MARSH HARRIER were numerous. A walk was made to a hide in the woods which produced a male PEREGRINE circling over and the recently cut reeds yielded two LITTLE EGRET.

With it being reasonably quiet, we wandered back to the scrape where we added REDSHANK to the growing bird list. We then returned to the van for a short drive to the Avalon Marshes Visitor Centre where we tucked into our packed lunches in the warm sunshine with REED BUNTING, GREENFINCH, HOUSE SPARROW and GREAT TIT for company.

Afterwards it was off to Ham Wall RSPB Reserve where we enjoyed an afternoon stroll in the sunshine. The sheltered paths provided home to several species of butterfly including BRIMSTONE, ORANGE-TIP, PEACOCK and SMALL TORTOISESHELL. CHIFFCHAFF and BLACKCAP were quite numerous and both CETTI'S WARBLER and WATER RAIL called nearby.

We reached the first viewing platform which produced a single male WIGEON amongst the more common wildfowl. It was great to sit with the warm sun on our backs which made us want to fall asleep, and for one member of the group this actually happened and he ended up falling off the bench!

GREAT WHITE EGRET was seen in flight, disappearing behind an area of woodland so we took a walk to the second platform. Then a couple of GREAT WHITE EGRETS were seen in flight and in the reed-bed we caught a glimpse of BITTERN feeding at the back of the lagoon. A smart male GARGANEY was seen on the pool and a scan of the area produced good numbers of COMMON BUZZARD.

With time getting on we retraced our steps and visited the new Tor View Hide, which apart from a GREAT CRESTED GREBE on the nest and both GREY HERON and MALLARDS it was rather quiet.

The walk back to the car-park produced good views of male CETTI'S WARBLER which flitted around some scrub close to the path. Then we had a twenty minute drive back to the hotel where it was good to have a hot shower and freshen up.

Our evening meal was very welcome and we all went to bed very happy after the days' birding.

Wednesday 2nd April
We awoke to find overcast conditions and by the time we had breakfast it had started to rain heavily. Once suitably full, we headed off to visit the southern levels. Our first site was the RSPB's Swell Wood Reserve which was alive with birds in the car-park. A male GREAT SPOTTED WOODPECKER was seen perched up and could be heard tapping away at a dead tree.

The Woodland Hide was our next stop, where a profusion of spring flowers were seen including WOOD ANEMONE, LESSER CELANDINE, BLUEBELL, DOGS MERCURY and WOOD SPURGE were noted. From the hide we had good views of up to 25 pairs of nesting GREY HERON along with at least six pairs of LITTLE EGRET.

The circular trail was quite productive with singing male COAL TIT, TREECREEPER and NUTHATCH seen well. Following a tip-off by another birder we relocated to a nearby site and found our main target, two adult COMMON CRANES. We had good views of these majestic birds as they elegantly wandered around the flooded fields.

A massive female PEREGRINE perched in a dead tree and several CURLEW could be seen in the fields. In the hedgerows nearby, we saw LONG-TAILED TIT, CHIFFCHAFF and WREN.

It was then off to Langport for a toilet stop and a chance to grab a takeaway coffee, before heading to Greylake RSPB Reserve where we had lunch. The feeders in the car-park gave us excellent views of several REED BUNTING.

We spent some time in the hide overlooking a large area of wet fields that were home to around 20 LITTLE EGRET, LAPWING, REDSHANK, GREY HERON, TEAL, GADWALL and MUTE SWAN. A pair of COMMON BUZZARD were seen and good scope views were had of one feeding on the ground.

The remainder of the afternoon was spent to the south, where evidence of the recent serious flooding of the levels was very much in evidence. A scan from a viewpoint found us several ROE DEER feeding in a stubble field. Another birder came by and put us onto another area.

After parking up, we scanned the fields and found three COMMON CRANE feeding in fields and the more open water held up to 1000 TEAL and large numbers of SHOVELER, WIGEON and GADWALL and when all these were disturbed by passing raptors, the sight was amazing!

We concluded the day by visiting an area of flooded fields and as we stood on the road we could see where many trees had died from over 5 feet of water! Hundreds of first-year BLACK-HEADED GULLS fed alongside 18 LITTLE EGRET and about 25 SHELDUCK.

It was then back to the hotel where we enjoyed a great evening with some lovely food.

Thursday 3rd April
We enjoyed a good breakfast and said our goodbyes to the hotel after loading up the van. Our first port of call was Cheddar Reservoir, a bowl shaped body of water sheltered by the Mendip Hills. Good numbers of LESSER BLACK-BACKED and HERRING GULLS were seen bathing on the water and three SHOVELER, MALLARD, POCHARD and TUFTED DUCK were noted. The grassy fields and the hedgerows held GREAT SPOTTED WOODPECKER, MEADOW PIPITS and both GOLDFINCH and GREENFINCH, the former was watched picking up Dandelion petals.

We then drove through the scenic Cheddar Gorge where we stopped briefly to look at the wild goats on the hillsides. Whilst here, we had amazing views of a pair of PEREGRINE as they flew round above us calling before disappearing from view.

We then revisited Chew Valley Lake and after a toilet stop, headed to Herriotts Bridge where three BARNACLE GEESE were seen as well as several GREAT BLACK-BACKED GULL. Steve then found a 2nd winter ICELAND GULL that gave good scope views alongside HERRING, LESSER BLACK-BACKED, COMMON and BLACK-HEADED GULLS.

Pam found a strange duck on the opposite side of the road which turned out to be a male ***** DUCK but unfortunately it was flushed by two fishermen in a boat. We then stopped at Heron's Green Bay where the COMMON SANDPIPER from Monday was still present, as well as the PINK-FOOTED GOOSE.

It was then off to the dam for lunch which was rather pleasant indeed and sheltered from the cool wind. We left the area and once through Bristol City centre, we made good time on the M4. A HOBBY flew over the road just west of Swindon which was unexpected and we realised that during the tour we failed to see a single Kestrel!

The M25 was pretty heavy but we managed to arrive back in Basildon at exactly 7.00pm and after unloading the bags we said our goodbyes after what had been a very enjoyable tour with a lovely group of people with plenty of laughs and good birds!
Next
Previous