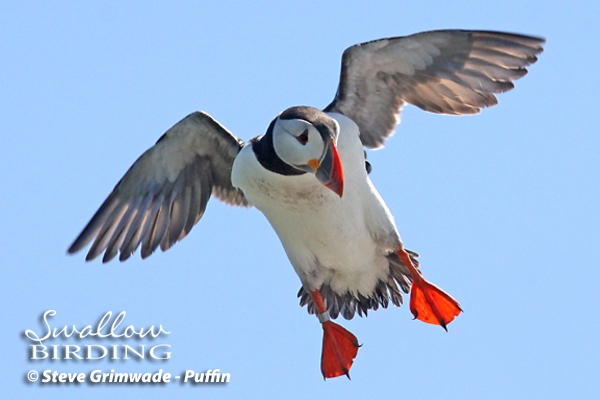 Sunday 15th June
We left Colchester bright and early for our journey to Northumberland which produced quite a few RED KITE and COMMON BUZZARD around the Peterborough area. We broke the journey close to Leeds with a visit to Fairburn Ings RSPB Reserve, where an enjoyable few hours were spent wandering around.

TREE SPARROW were incredibly numerous around the Visitor Centre as they fed on feeders and on the ground often alongside HOUSE SPARROW for ID comparison. Along the boardwalk we had excellent views of several RUBY-TAILED WASPS on a tree trunk that glistened in the sun.

WILLOW WARBLER, BLACKCAP, CHIFFCHAFF and COMMON WHITETHROAT were seen along the trails through the woodland and on the first pool we had scope views of a singing male REED WARBLER plus LITTLE GREBE and plenty of COOTS.

It was pretty quiet from the first hide but OYSTERCATCHER, POCHARD, GREAT CRESTED GREBE and a large family party of 16 ducklings accompanied a female GADWALL.

In the woodland we found several specimens of the longhorn moth Nemophora degeerella and back at the big pool a LITTLE RINGED PLOVER flew by. The excitement wasn't quite over when a KINGFISHER was spotted at the viewing screen which gave good views and close to the centre, whilst having lunch Andrew struck gold again by finding a WILLOW TIT on the feeders which came in briefly now and again.

A couple of BULLFINCH were also seen whilst we tucked into our sandwiches. We then drove off northwards to Northumberland, our first stop being the beach at Boulmer. Although it was high tide there was a small flock of waders on the beach, which included SANDERLING, DUNLIN and RINGED PLOVER. Offshore were small numbers of KITTIWAKE moving north, plus a single MANX SHEARWATER that powered its way northwards. Other species here included EIDER, SHELDUCK, SANDWICH TERN, PUFFIN, GUILLEMOT and RAZORBILL.

It was then time to head up to our base for the next three nights in Seahouses and after a chance to unpack and shower we met in the bar for a drink before completing the bird list and having our evening meal.

Monday 16th June
Some of the group took a stroll along the harbour noting good numbers of EIDER in the sheltered waters, before returning to the hotel for a hearty breakfast.

Afterwards we met on the quay ready for our boat trip out to The Farne Islands to be told that due to a heavy swell we would not be able to land on Staple Island and because of this, the boat would leave at a later time of 11.30am. This gave us some time to watch the EIDER in the harbour plus GANNET, OYSTERCATCHER, SANDWICH TERN and good numbers of Auk moving northwards just offshore.

There was also time for a quick cuppa before we joined our boat and headed out to the Farnes. Once we were a little way out we began to see good numbers of PUFFIN, plus GUILLEMOT, KITTIWAKE, RAZORBILL and SHAG. The boatman managed to get us close in to the cliffs where the seabirds certainly put on a show for us. As well as thousands of seabirds, it also gave us the chance to see GREY SEALS at close range as they loafed on the rocks at low tide.

After circumnavigating the islands we headed back for our 3 hour visit to Inner Farne where we were greeted by the many ARCTIC TERNS preparing to dive bomb us to protect their chicks and eggs. This is an amazing sight and quite scary, as although these terns look so delicate, they are ferocious in their attack! As we went further onto the island a small colony of SANDWICH TERNS were noisy, but the real stars of the show were thousands of PUFFINS flying to and fro with bills full of Sand Eels for their young.

As we took a walk around we stumbled across a BBC film crew filming a new TV series called ‘Britain Under Your Feet’ and as part of this they were featuring PUFFINS. The head warden then pulled out an adult PUFFIN from its burrow, which he ringed and then a few minutes later he pulled out a little PUFFLING!

After ringing this black, fluffy chick he put it back in its nest burrow to cause minimum disturbance to the bird. In the courtyard we took a look at SCARCE FIDDLENECK, a plant which only grows there and no-where else in Europe and was discovered on Inner Farne in the 13th century.

There was time for a short rest before catching the boat back to Seahouses. On arrival, a few headed back to the hotel to freshen up whilst several remained around the harbour watching the various families of EIDER on the slipway.

We met for an evening drink and the bird list before our evening meal.

Tuesday 17th June
After breakfast we left Seahouses and drove inland to the beautiful Harthope Valley close to the market town of Wooler.

We started at the far end of the road and from the parking area had good views of both COMMON SANDPIPER and DIPPER on the small stream, whilst on the opposite side of the road, a single SPOTTED FLYCATCHER was seen briefly.

The warm sunshine encouraged many birds to sing and there was quite a bit of activity with family parties of MISTLE THRUSH, STONECHAT, WHEATEAR and MEADOW PIPIT on the moors. Over the next hour or two we birded along the road noting GREY WAGTAILS, WILLOW WARBLERS and overhead flew a lone SISKIN and good numbers of LESSER REDPOLL.

The walk along the road gave us the chance to see quite a few RED GROUSE up on the moors including one female with a single chick. Viewing from Langleeford Farm Bridge we found a juvenile DIPPER plus more GREY WAGTAILS whilst HOUSE and SAND MARTINS plus SWALLOWS flew around us.

It was time for lunch which we enjoyed whilst sitting on the bank of the river. Another juvenile DIPPER fed unconcerned in front of us, whilst an adult zipped backwards and forwards on the river. A pair of LESSER REDPOLL were seen well including a female drinking from the river.

We moved position and drove a little way back along the road where a gentle stroll into an area of mixed woodland produced a pair of COMMON REDSTART that we watched along the fence-line and a little further on we located a pair of WHINCHAT perched up on bracken and trees on the side of the hill. A pair of COMMON BUZZARD soared overhead and a CURLEW came in to escort these raptors out of the area.

With time getting on, we left the area and drove down to Amble to rendezvous with the skipper of our afternoon boat trip out to Coquet Island. Unfortunately due to the swell, the trip was cancelled so we headed off for a cuppa and a slice of cake before making a short drive along the coast to overlook the island.

A family group of STONECHAT fed in the car-park and both MEADOW PIPIT and REED BUNTING flew around. We set the scopes up overlooking the island and although distant, you could see several ROSEATE TERNS flying about over the island with many ARCTIC and SANDWICH TERNS. PUFFINS flew to and fro in front of the island and on the beach in front of us fed several OYSTERCATCHER and a pair of ROCK PIPIT whilst a small SAND MARTIN colony was seen in the sandy dunes.

It was then time to return to the hotel and although we arrived back slightly later than planned, it had been a good day despite the disappointment of the boat trip. Once again, dinner was very filling and we all went to bed suitably full!

Wednesday 18th June
After breakfast we loaded up our luggage and drove southwards stopping at Druridge Pools Nature Reserve. SEDGE WARBLERS and COMMON WHITETHROATS sang from the scrub as we walked along the path to the hide. From the first hide we had distant but good views of two young SPOONBILLS as they fed in the shallows along with TEAL, GADWALL and a few LAPWING. A pair of SWALLOWS were nesting in the hide so we made a hasty retreat and went to the hide opposite which looked over a much deeper pool.

Good numbers of duck were present and amongst the common MALLARD were GADWALL, TUFTED DUCK and a single male WIGEON roosting on the bank. A LAPWING family was seen in the shallow bay before we had to move, as SWALLOWS were nesting in this hide also!

It was then a few miles south to Cresswell Ponds Nature Reserve, where from the northern end we found several pairs of AVOCET nesting, plus lots of SAND MARTINS. The heat haze was quite bad as we scanned to the south, so we drove down to the southern end and took a walk to the hide.

Seven BAR-HEADED GEESE were seen amongst the GREYLAG and around the farmyard we had good views of several TREE SPARROW. From the hide we had wonderful views of 23 LITTLE GULLS roosting on the bank plus COMMON and SANDWICH TERNS, plus a large flock of BLACK-TAILED GODWIT. A few minutes later, these were put up by a tatty female MARSH HARRIER that drifted over.

Unfortunately it was time to start our journey home which was pretty uneventful although we did see around 5 RED KITES in varying places, plus the usual COMMON BUZZARDS and KESTRELS. We arrived back in Essex in good time, after what had been a fantastic tour with some excellent birds and experiences plus good weather, food and company.
Next
Previous