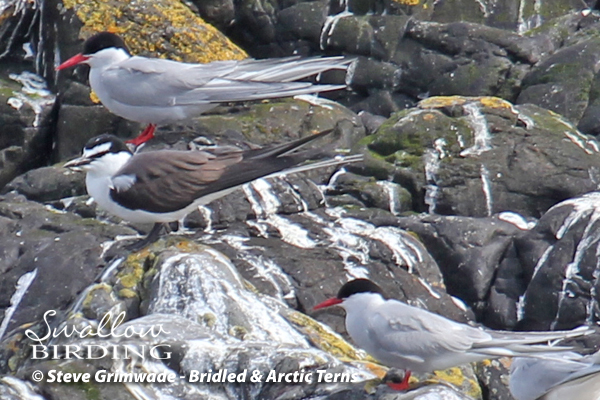 Tuesday 24th June
We left Maldon on a lovely sunny morning and were soon on our way northwards after a brief stop at Cambridge Services for coffee. The area just north of Peterborough produced our first sightings of both RED KITE and COMMON BUZZARD and with the traffic flowing freely we arrived at RSPB's Fairburn Ings Reserve near Castleford.

Stephie and Dennis who had travelled independently met us here in the Visitor Centre. Good numbers of TREE SPARROW frequented the feeders along with a few juvenile BLUE and GREAT TITS. After tucking into our lunches we visited another adjacent feeding area and had good but brief views of a WILLOW TIT plus a lovely female BULLFINCH that spent some time feeding on the ground.

A walk around the boardwalk gave us good views of WILLOW WARBLER singing from a Silver Birch but slightly unusual was a flyover AVOCET, something we had not expected to see!

Along the paths we came across good numbers of wildflowers including SOUTHERN MARSH ORCHID, MEADOW VETCHLING and MEADOWSWEET amongst others, plus RINGLET BUTTERFLIES and COMMON BLUE DAMSELFLY.

We then returned to the vehicle to continue our journey north and a few hours later pulled into the car park of our accommodation in Seahouses. After sorting out our rooms we had some time for a shower before meeting for dinner.

The evening meal went down very well indeed and we all went to bed very much looking forward to our first full day in Northumberland.

Wednesday 25th June
We met for breakfast at the civilised time of 8am and with a good deal of food to choose from didn't leave hungry. The group met on the quay where we saw female GOLDENEYE amongst the many COMMON EIDER and just after 9am the good news came that the boatmen were going to attempt to land on Staple Island. For the last couple of days they hadn't been able to, due to the heavy swell in the North Sea.

As we left the sheltered waters of Seahouses Harbour, we started seeing our first GUILLEMOTS and PUFFINS plus a few GANNET on their way to their breeding colony at Bass Rock in the Firth of Forth.

The boatmen expertly took us straight in to Staple Island and told us that we only had one hour instead of the planned two due to the swell. Grateful to be on the island we stopped to admire the large numbers of GUILLEMOT, PUFFIN, KITTIWAKE and SHAG on the white-splashed cliff tops, and at one time all you could hear was the clicking of camera shutters as the air was just alive with birds.


After a while, the boatmen called to say that we had in fact got the full two hours as the swell wasn't as bad as expected. This gave us time to explore the remainder of the island and find several ROCK PIPIT and OYSTERCATCHER plus enjoy the massive numbers of seabirds all at close range.

With time up, we sailed to Brownsman Island where we had close up views of around 20 GREY SEALS hauled out on the shingle beach with several more in the water. After sailing around and getting eyeball to eyeball with the nesting colonies of KITTIWAKE, GUILLEMOT, RAZORBILL, PUFFIN, SHAG and some FULMAR, we finally made our way round to Inner Farne ready for its 1.30pm opening.

We then made our way onto the island and were greeted by many ARCTIC TERNS as they protected their chicks or eggs as we made our way up the path where lunch was calling! After tucking into our packed lunches we took a stroll around the boardwalk and had excellent views of the SANDWICH TERN colony with a nice few COMMON TERNS in the adjacent pool. Our walk took us around the island, taking in the many seabirds and finishing up on the quay ready to catch our boat back to Seahouses. This happened to coincide with the arrival of a BRIDLED TERN, a rare visitor to the UK. It had been present for the last few days on the islands and was a highlight of the day.

It sat on the rocks alongside ARCTIC and SANDWICH TERNS before flying out to make one of its many feeding forays. This coincided with our return boat to the mainland after our excellent day on the Farnes.

Our evening meal went down very well and was rounded off with a cake as it was Dennis's birthday. Some of the group went for a walk after dinner before retiring to bed.

Thursday 26th June
We awoke to find clear, bright conditions for our third day in Northumberland. After breakfast we drove north and stopped at the Monk’s House Pool which produced a few TUFTED DUCK, LITTLE GREBE, COMMON TERN and a small party of LAPWING amongst others. It was then off to nearby Bamburgh Castle which was once home to the kings of ancient Northumbria. The Castle is one of Northumberland's most iconic buildings and we enjoyed the morning wandering around.

Lunch was enjoyed in the busy tearooms before we rounded off our visit. A few birds were seen including FULMAR, HOUSE MARTINS, SWALLOW and a singing male SEDGE WARBLER was heard below the castle walls in the scrub.

It was then off inland to the Harthope Valley where a couple of RED GROUSE were seen on the heather-clad hillsides and on the stream we had good views of a COMMON SANDPIPER on the rocks. With a small amount of time available, we strolled along the road noting several fly-over LESSER REDPOLL and a single SISKIN.

Further along the track we came across a nesting pair of SPOTTED FLYCATCHER, one of which gave good views as it perched in a tree nearby. Another pair of flycatchers were seen further down the road before we retraced our steps back to the van ready for our journey back to Seahouses.

Dinner was once again another filling affair and afterwards we managed to complete the bird list for the last three days. As we finished this, a beautiful sunset took place behind Bamburgh Castle, rounding off the day nicely.

Friday 27th June
It was a beautiful morning for our visit to Hauxley Nature Reserve, where on arrival we were greeted by an amazing wall of colour in the Wildflower Meadow adjacent to the car-park.

Several of the volunteers took us round the meadow, pointing out various plants which was very educational. Some of the highlights were Orange Hawkweed, Dyer’s Greenweed and Northern Marsh Orchid to name just a few.

It was soon back to the birds with a visit to a hide overlooking the reserve which produced a single EGYPTIAN GOOSE, GADWALL and GREY HERONS plus good numbers of both GREYLAG and CANADA GEESE. At the far end of the reserve we could see a small group of CURLEW roosting and in the sheltered bays a summer plumaged DUNLIN fed and several REDSHANK although they were quite distant. Because of this we made our way down to another hide which would give us a much closer view of these birds.

The CURLEW flock had grown to an impressive 49 birds and small numbers of OYSTERCATCHERS frequented the site. SAND MARTINS skimmed over the water and on the rocky promontory we had good comparisons of both SANDWICH and COMMON TERNS. Slightly strange was the SWAN GOOSE wandering around with the other geese.

We then wandered back for lunch in the picnic area and then moved off to Amble to catch our boat to Coquet Island. Small parties of EIDER bobbed around the harbour and as we left the sheltered waters of the harbour we began seeing SANDWICH TERNS diving into the sea whilst our skipper Dave guided us slowly through the swell and on towards the island.

As we neared it, good numbers of PUFFIN were seen both in flight and on the water and we saw our first ARCTIC TERNS of the day. The waters were calmer here and this enabled us to get reasonably close to small numbers of ROSEATE TERN that were using the nesting boxes on the slopes of the island. Several ROSEATE TERN were seen roosting on the beach and their black bills really gleamed in the afternoon sunshine.

Content with our views of this rare seabird we slowly made our way back to Amble Harbour and once off the old lifeboat we wandered into town for an ice cream. The shop had so many flavours that it took us some time to choose which ones we wanted!

Back towards the van we spotted a small flock of RED-BREASTED MERGANSER flying north but the view was pretty brief. We then returned to the hotel where we had some time to get ready before enjoying our evening meal.

Saturday 28th June
The weather had completely changed when we awoke to choppy seas and a moderate northerly wind blowing down the North Sea.

This didn't matter too much as were spending the day in the market town of Alnwick, visiting both the famous gardens and castle.

After parking in the main car-park, we first visited the exceptional gardens before moving on to the castle for the afternoon. There was even time for some of the group to buy a few plants to take home to Essex.

We arrived back in Seahouses in good time to visit the National Trust shop for a spot of souvenir shopping.

Before our evening meal we met for a group photograph which was intended to be in the garden but due to the dodgy weather had to be indoors!

Sunday 29th June
It was time to say our goodbyes to Seahouses and also to Stephie & Dennis who were staying on an extra day and make our way southwards stopping first at Druridge Pools Nature Reserve.

It was still pretty breezy but at least the early morning rain had stopped and as we reached the first hide, we looked out to see four SPOONBILL feeding in the shallows. Luckily for us, a Helicopter flew over and flushed them allowing us to get good flight views.

It also disturbed a flock of BLACK-TAILED GODWIT plus GADWALL, TEAL and a party of four COMMON SNIPE.

The other hide was quite exposed from the cold northerly wind so we didn’t hang around, but instead made our way down to nearby Cresswell Ponds where it was a little less windy.

From the hide, a small party of nine LITTLE GULL roosted, along with several SANDWICH and COMMON TERNS. A pair of AVOCET were nesting on an island and out on the open water was a female GOLDENEYE that was possibly the same bird from Seahouses plus POCHARD, TUFTED DUCK and both CANADA & GREYLAG GEESE.

With time getting on, we made our way to Morpeth for a coffee and also to pick up lunch before making our way back to Essex.

A couple of RED KITE and a single SPARROWHAWK were noted amongst the COMMON BUZZARDS and we arrived back in Maldon at around 7.40pm where we said goodbye to the group who had been fantastic company throughout the holiday.
Next
Previous