WHERE THE PAGER TAKES US – WADER SPECIAL
Saturday 23rd August 2014 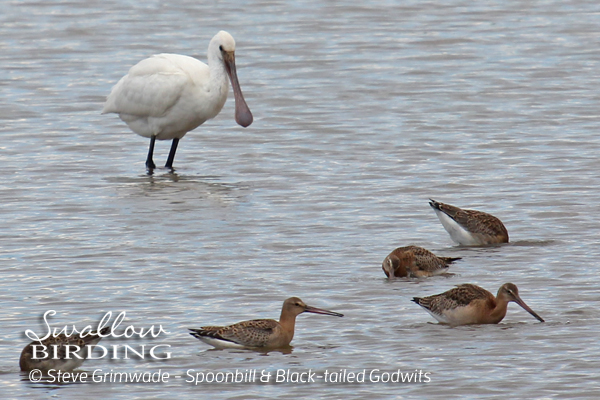 With bird news relatively quiet through East Anglia we made the decision to head up to Frampton Marsh RSPB in Lincolnshire where there had been good numbers of waders in previous days.

Up to 400 ICELANDIC BLACK-TAILED GODWITS roosted on the freshwater lagoon and scanning produced GREENSHANK, COMMON SNIPE and a few RUFF. Moving on to the next pools we located three juvenile LITTLE STINT that showed reasonably well at times. DUNLIN, LITTLE RINGED and RINGED PLOVER were also seen. Up on the seawall overlooking the reserve we found at least six WHIMBREL, BARNACLE GOOSE and good numbers of LITTLE EGRET but despite a good and thorough search we failed to see the long-staying Glossy Ibis.

With a dark rain front approaching, we headed back to the visitor centre for lunch and just finished when it started raining heavily. This was our cue to move on to nearby Freiston Marsh RSPB reserve close to Boston.

After parking we wandered along the concrete road and in front of us had stunning views of a BARN OWL as it flew across the marsh. We reached the viewing screen and there in front of us was a fine immature SPOONBILL along with DUNLIN, LITTLE EGRET, juvenile ICELANDIC BLACK-TAILED GODWITS, LITTLE RINGED PLOVER, REDSHANK, AVOCET and our target, a pristine PECTORAL SANDPIPER that gave good scope views as it fed along the back of the reservoir.

Overhead we watched a juvenile COMMON BUZZARD and a SPARROWHAWK being mobbed by plenty of SAND MARTINS. As we reached the carpark we had really good views of at least two pairs of TREE SPARROWS feeding young at nestboxes on a telegraph pole. The bushes and scrub held good numbers of birds including LESSER & COMMON WHITETHROAT, CHIFFCHAFF, WILLOW WARBLER, REED WARBLER, BLACKCAP, SPOTTED FLYCATCHER and loads of GOLDFINCHES.

It was then back to Frampton Marsh where we wandered out to the 360 degree hide, where we had good sightings of YELLOW WAGTAILS, LITTLE RINGED & RINGED PLOVERS, SPOTTED REDSHANK, GREENSHANK, MARSH HARRIER, WIGEON, SHOVELER, GADWALL, TEAL and MALLARDS.

We concluded the day with cake in the carpark before making the long journey home after what had been a good day out!
Next
Previous