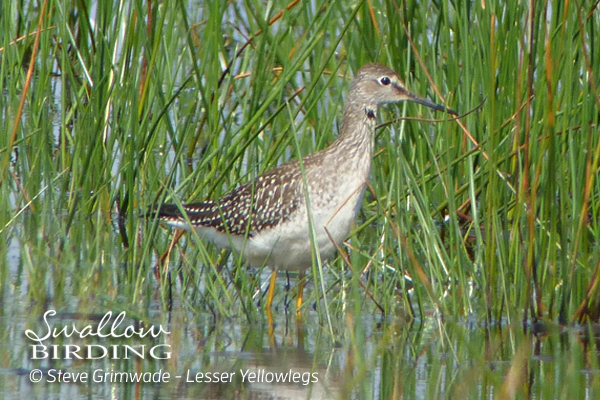 Saturday 30th August
After picking everyone up at various locations on our way, we started our journey southwest towards Cornwall. The birds of note were COMMON BUZZARDS, 1 RED KITE and 2 RAVENS.

Eventually after a long drive we arrived in Cornwall and headed straight to Pendeen for our first seawatch of the tour.

Once we had made ourselves comfortable on the cliff-top, we settled down to watch the many birds passing. The most numerous species was MANX SHEARWATER of which several thousand were seen flying past or feeding just offshore. Small numbers of GANNET moved through, as did FULMAR, KITTIWAKE and both SANDWICH and COMMON TERNS.

Liz and Yvonne spotted a SOOTY SHEARWATER flying west amongst the manxies but unfortunately not everyone managed to get onto it and then an adult SABINE'S GULL flew west also.

Three BOTTLE-NOSED DOLPHIN were well spotted by Lesley as they showed quite well close by. Other species seen included good numbers of SHAG roosting on offshore rocks, along with an ATLANTIC GREY SEAL and both PEREGRINE and SPARROWHAWK.

With time getting on we headed into Penzance to check into our accommodation before meeting in the bar for a well-deserved drink! Our evening meal was delicious and we certainly didn't go hungry. After completing the bird list in the lounge we were glad of the exercise walking up to our rooms!

Sunday 31st August
We were awoken to the dulcet tones of the Penzance HERRING GULL population and at 7.30 headed down for breakfast. Breakfast set us up for the day and although weather conditions were not ideal for seawatching, we headed down to Porthgwarra.

As we drove along narrow lanes down to the village we made a brief stop at Roskestal farm where a fine HOODED CROW sat on one of the barns. After parking we climbed up the coastal path to a flat area where we set up our chairs and made ourselves comfortable.

Conditions were quite calm with just a slight westerly wind blowing, but there did seem to be plenty of GANNETS and MANX SHEARWATER passing close by. FULMAR and KITTIWAKE flitted past and eventually we picked up an ARCTIC SKUA heading west and a short time later a BALEARIC SHEARWATER which spent a few minutes lingering offshore before heading west.

With the calm conditions it was almost guaranteed that we would see a Cetacean or two. This started with a few HARBOUR PORPOISE moving offshore, but Liz did well to find a MINKE WHALE that was moving fast northwest and was seen breaching several times as it did so. Then Liz struck gold again with a pod of COMMON DOLPHIN, fishing out to sea and occasionally leaping out of the water!

ROCK PIPITS, WHEATEAR and STONECHAT were seen around us and then news came through of a Dotterel close by, so Steve and some of the group went off to find it. Eventually after quite a long walk the cracking juvenile DOTTEREL was located as it wandered over the heath picking insects off the ground.

Delighted with this we ambled back and luckily most of it was downhill, but whilst we had been away the remainder of the group had seen what was probably a Great Skua fly past, although just too distant to ID.

As time ticked away, numbers of MANX SHEARWATER increased and then Liz did it again by finding an OCEAN SUNFISH waving its fin out of the water. Eventually it came quite close where it was joined by another!

We rounded off our seawatch with brief views of two CHOUGH as they called from the rocks behind us before disappearing over the ridge.

Arriving back at the hotel, we had time for a shower before meeting for a pre-dinner drink. Our evening meal was once again very good and after completing the bird list we headed off to bed hoping that the following day would be a good one.

Monday 1st September
We awoke to find overcast conditions and once we’d had breakfast the weather had deteriorated with visibility very poor, combined with a fine drizzle.

Despite this we headed up to Pendeen and walked down the clifftop path to the seawatching area. Conditions were so poor, you could hardly see the sea! After a couple of hours of getting wet and not seeing much, Steve took some of the group up into the village for a warming cuppa and some partook in a hot pasty!

On their return, the weather had improved significantly and from there on a huge MANX SHEARWATER passage was noted, of at least 100 birds per minute at times. Scanning through these revealed several SOOTY SHEARWATER which came quite close inshore.

COMMON TERN, KITTIWAKE and FULMAR flew through, with smaller numbers of GANNET and then two smart BALEARIC SHEARWATER were found flying west.

Over the next few hours, our SOOTY SHEARWATER total increased to at least 25 birds whilst the MANX SHEARWATER number certainly exceeded 10,000.

Despite a good try, we failed to find any of the larger shearwaters but other notable species included WHEATEAR, WHIMBREL, HOUSE MARTIN and a GREY HERON flying out to sea.

We returned to the hotel in good time and met in the bar for a pre-dinner drink before having another meal of epic proportions. After completing the bird list, we headed off to bed after what had been a good but tiring day.

Tuesday 2nd September
The day dawned bright and sunny for our last day in Cornwall and after breakfast we said our goodbyes and loaded up the van, driving the short distance to the Hayle Estuary. From the hide overlooking Ryan's Field we noted a good number of waders including juvenile KNOT, GREEN and COMMON SANDPIPERS, RUFF, CURLEW and REDSHANK. Up to 6 MEDITERRANEAN GULL roosted and both KINGFISHER and GREY WAGTAIL were seen.

With the tide coming in, a stroll was taken overlooking the causeway where the light was just perfect. GREENSHANK roosted with good numbers of REDSHANK and in the distance were a flock of RINGED PLOVER alongside a few DUNLIN. Duck included TEAL, MALLARD and WIGEON and another KINGFISHER was seen hovering over the tidal creeks.

With our time at a premium we headed into Hayle to visit a shop for pasties before driving down to the area around Goonhilly Earth Station. After pulling into a small layby it didn't take long to locate our quarry, a cracking juvenile LESSER YELLOWLEGS! This superb wader spent time feeding in the sedge-lined pool and was often seen in company with a WOOD SANDPIPER, also showing really well. After watching these birds for quite a while it was unfortunately time to head off for our journey home.

Our journey was pretty good and of course a few birds were seen including SPARROWHAWK, KESTREL, PEREGRINE, COMMON BUZZARD and RED KITE and as we drove around the M25, a few RING-NECKED PARAKEET flew over the road. We dropped off Trevor at Thurrock Services before dropping off the rest of the group at various points on our way home.

It had been a very eventful tour with a good variety of seabirds, waders and other species, all enjoyed with a great group of people!
Next
Previous