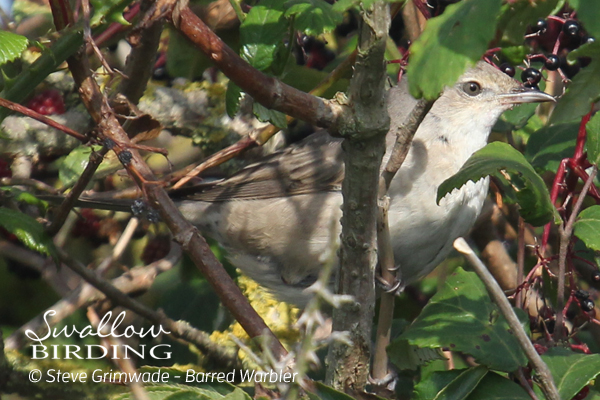 The day once again commenced at Thorpeness where this time the Barred Warbler failed to play ball in the hour we were present. A HOBBY hunted along the cliffs and a single COMMON WHITETHROAT flitted amongst the bushes.

We then headed northwards to Minsmere RSPB reserve and wandered down to the North Levels. During our walk down we were treated to excellent views of SPOTTED REDSHANK on the pool by the pathway. Eventually reaching the correct pool, we were soon watching a cracking juvenile PECTORAL SANDPIPER feeding on the mud. MARSH HARRIERS hunted over the reeds and a BEARDED TIT or two flitted about.

On our walk back, a juvenile LITTLE STINT was seen feeding in the Konik pony field and a WATER RAIL was seen in flight.

After lunch and a hot drink we revisited Thorpeness, where this time failure was not an option!! Eventually with great perseverance we had reasonable views of the BARRED WARBLER as it fed in a bush. Delighted by this, we finished off the day at Walberswick Marshes where we met up with young birder Max Hellicar.

Hundreds of large gulls were roosting on the fields and with time and effort we located a YELLOW-LEGGED GULL and both a 3rd winter and adult CASPIAN GULL, the latter well found by Max.
Back at the van we enjoyed some cake whilst a NORTHERN WHEATEAR fed nearby.
Next
Previous