WHERE THE PAGER TAKES US – AUTUMN SPECIAL
Saturday 27th September 2014 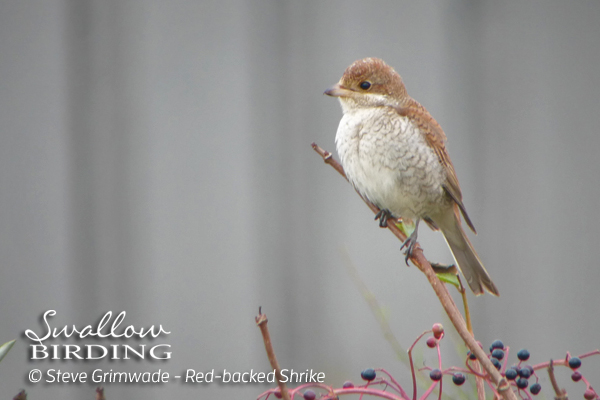 With bird news pretty quiet throughout East Anglia we opted to spend the morning at Titchwell RSPB Reserve on the North Norfolk coast and if anything turned up elsewhere we would be in a good position to do so.

Our journey north produced a small covey of 8 GREY PARTRIDGE as well as quite a few PINK-FOOTED GEESE near the coast. The walk out along the wall gave good views of a juvenile RUFF as well as COMMON SNIPE and just past the Island Hide we watched a cracking juvenile CURLEW SANDPIPER feeding alongside a small flock of DUNLIN, when a WATER RAIL flew from the reeds in front of the hide across the water.

Good numbers of RUFF and BLACK-TAILED GODWIT fed out in the open water and scanning produced a single AVOCET and LITTLE STINT. Over the distant woods we watched a pair of HOBBIES feeding, which were seen later hunting over the coastal pools.

The sea was quite lively with a massive flock of COMMON SCOTER plus 5 COMMON EIDER, GUILLEMOT, GREAT CRESTED GREBES and a RED-THROATED DIVER which gave a close fly by.

The walk back yielded a family party of RED-CRESTED POCHARD plus several showy BEARDED TITS. Two COMMON BUZZARDS flew west and at least four MARSH HARRIER were seen including a female that came in off the sea.
We enjoyed lunch in the sunshine before making a decision to head southwards to Suffolk.

After a fair journey, we arrived at Ness Point in Lowestoft and a few minutes later were watching a superb RED-BACKED SHRIKE moving along a hedge-line in the car park. Out to sea we noted a couple of GREAT SKUA plus an adult MEDITERRANEAN GULL.

With some time spare we attempted a visit to Kessingland Sewage Works but the car park had a height barrier which was so frustrating!

Instead we rounded off the day at SWT Hen Reedbeds Reserve near Southwold where the highlights were two HOBBIES hunting insects.
Next
Previous