WHERE THE PAGER TAKES US – AUTUMN SPECIAL
Sunday 28th September 2014 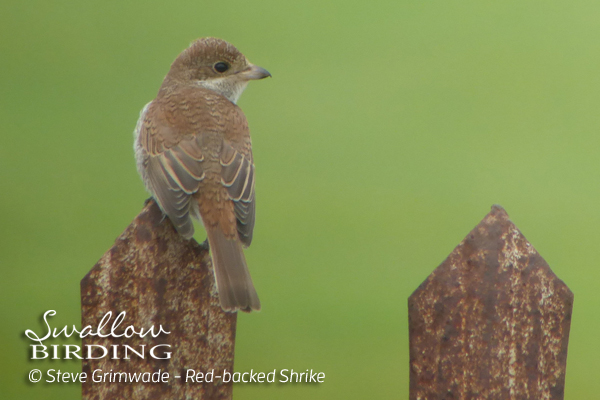 We started the day off at Ness Point, Lowestoft where the 1st winter RED-BACKED SHRIKE entertained us at close quarters as it caught several wasps and bumblebees. Along the seawall a KINGFISHER was seen flying up and down the coast and a wander along the front produced amazing views of a PURPLE SANDPIPER at very close range!

We took a walk down to Hamilton Dock but failed to locate the reported Black Redstarts so we headed off southwards to Minsmere RSPB Reserve. After lunch we took a walk out to the East Scrape noting several BEARDED TITS along the way. It was a sheer joy to be out on such a gorgeous day and as a result the hides were quite busy.

Nevertheless, we found a PURPLE SANDPIPER foraging around the scrape along with GREENSHANK, SPOTTED REDSHANK and SNIPE plus great views of a swimming GRASS SNAKE. MARSH HARRIERS and HOBBY hunted over the woods and large numbers of BARNACLE GEESE frequented the scrape also.

The walk back to the centre produced a drake COMMON SCOTER asleep on the sea and after a welcome cuppa back at the café we opted for a visit to Landguard Point in Felixstowe.

On arrival it was again busy with people enjoying the day but with a little perseverance we managed to find four NORTHERN WHEATEAR and three MEDITERRANEAN GULLS.

After cake back at the van we headed for home after what had been a very good day.
Next
Previous