WHERE THE PAGER TAKES US – AUTUMN SPECIAL
Sunday 5th October 2014 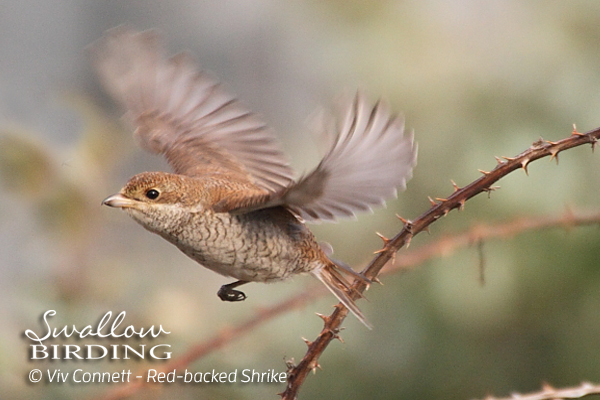 For the second day running we started in Lowestoft and on arrival, the RED-BACKED SHRIKE was showing superbly and down to 6ft on occasions. An adult MEDITERRANEAN GULL was seen offshore briefly along with GANNET and quite a few RED-THROATED DIVERS.

After a brief unsuccessful look for the Black Redstarts, we drove the short distance to Normanston Park where we could see a group of birders staring up at the trees. Before we got anywhere near them we could hear a YELLOW-BROWED WARBLER calling and suddenly there it was!

Over the next 10 minutes, we had good views of this migrant as it flitted around the trees in front of us.

It was then time to head to Minsmere to see whether the Little Crake would show again. The car park was packed but we found a space and wandered down to the Bittern Hide. Although pretty busy, we managed to find seats and it wasn’t long before the LITTLE CRAKE was seen albeit briefly.

We waited around 1 hour before it came out again and this time everyone saw it as it wandered around much closer than the previous day!

It was then off to Island Mere hide where we saw KINGFISHER, BITTERN and GREAT WHITE EGRET as well as a few BEARDED TITS.

After a cuppa we headed to Westleton Heath where we found up to three DARTFORD WARBLERS consorting with the local STONECHATS.

With some time remaining, we finished up at Sizewell where a female BLACK REDSTART was seen and offshore were three LITTLE GULLS and quite a few KITTIWAKES.

It was the end of a fantastic weekend of birding with two great bunches of customers!
Next
Previous