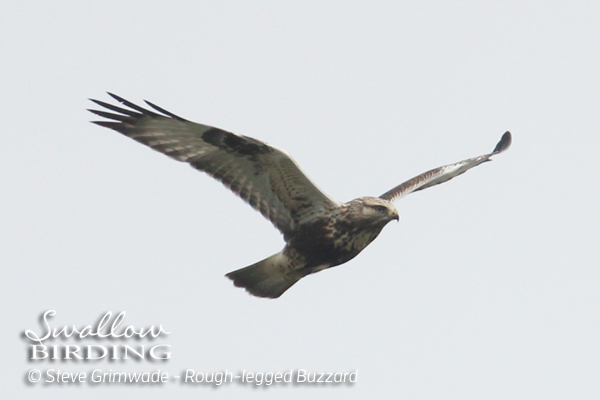 Sunday 26th October 2014
After making all our pickups, we headed northwards towards Yorkshire noting a couple of RED KITES, COMMON BUZZARD and flocks of LAPWING along the way.

Our first port of call was Hornsea Mere but conditions on arrival made birding difficult with gale force winds whipping across the lake. We scanned the lake finding a strange Aythya hybrid that resembled a Scaup but was actually slightly smaller than the adjacent TUFTED DUCKS!

Good numbers of common wildfowl were present including GOLDENEYE, POCHARD, GADWALL and loads of MALLARD. Eventually, we located three distant SLAVONIAN GREBES at the far side of the mere which were sheltering along with COOTS. Other species noted here included GREAT CRESTED & LITTLE GREBES, CANADA & GREYLAG GEESE plus a BLACK SWAN.

With conditions far from ideal we headed on towards Bridlington, making a stop not far from our accommodation, where almost immediately we had good views of a juvenile ROUGH-LEGGED BUZZARD hunting across adjacent fields. This superb raptor gave good views as it hovered alongside the road, oblivious to its watching admirers.

Also in the area were MEADOW PIPITS, YELLOWHAMMER, KESTREL and both SPARROWHAWK and BROWN HARE.

With some time remaining, a visit was made to Flamborough Head although the light was starting to go, but we did see three ATLANTIC GREY SEALS plus SANDWICH TERN amongst others.

It was then off to our accommodation where we had an enjoyable meal after settling in and then a well-deserved night’s rest.


Monday 27th October 2014
After a hearty breakfast, we drove northwards to Filey and spent a while at Filey Dams reserve on the edge of town. From the first hide we noted quite a few TEAL dabbling around the muddy edges, whilst in the hedgerow were a good group of TREE SPARROWS.

A female SPARROWHAWK zipped through flushing a SONG THRUSH from the hedge and a single REDSHANK fed out in the open water. The other hide provided us with a couple of SHOVELER plus GADWALL, CURLEW and many HERRING GULLS.

From here we drove back southwards making a stop at Hunmanby Gap, where we tried to get shelter behind the van from very strong winds. Scanning the open water here was quite productive with around six RED-THROATED DIVERS, SHAG, WIGEON, GREAT CRESTED GREBE, COMMON SCOTER, GANNET and both RAZORBILL and GUILLEMOT being spotted.

As we were driving past Grindale, it would have been rude not to pop in and try to see the ROUGH-LEGGED BUZZARD again. Luckily, it did put on another great show before going back to its favoured wood.

It was then down to Flamborough where we had a hot cuppa before wandering down to the Fog Station, where a few minutes later we were watching a fine SNOW BUNTING feeding on the short turf within the walled garden. Strong winds made birding difficult but whilst watching the bunting, a WEASEL appeared below us and showed well.

We had lunch in the shelter of the van and then drive round to Thornwick Pool, a small scrape on the northern edge of Flamborough. A few TEAL fed in the shallow water and two winter plumaged DUNLIN joined them before flying off. We moved round to the eastern hide where it was much more sheltered and our rewards were a little scant, although a SNIPE was good to see.

Our last port of call was South Landing which offered a little shelter and enabled us to see a single REDWING. Down on the beach we soon located the juvenile CURLEW SANDPIPER that was seen feeding alongside TURNSTONES and a single REDSHANK. As the tide came in, this delightful bird came incredibly close and the evening sun on it made it glow! Other birds noted included ROCK PIPIT, GREY WAGTAIL, KESTREL and lots of CARRION CROWS.

As the light disappeared, we headed back to base after what had been a good day. Dinner was once again excellent and we looked forward to our last day in Yorkshire.


Tuesday 28th October 2014
After breakfast, we loaded up the van and drove south to Spurn Point. It was a bright and sunny with a brisk south-westerly wind blowing when we arrived. Small flocks of SKYLARKS flew south and in the hedgerows, we found good numbers of BLACKBIRDS feasting on the various hips and berries.

A stop at the Canal Scrape turned out to be a little quieter than expected due to the high water levels but there were REDSHANK, MEADOW PIPIT, two JAYS, LITTLE GREBE and LITTLE EGRETS present.

Reaching the River Humber, the tide was receding and good numbers of waders fed close to the shore. The vast majority of waders were KNOT with GOLDEN PLOVER, GREY PLOVER, BAR-TAILED GODWIT, REDSHANK and DUNLIN in smaller numbers. A real surprise was a single GREENSHANK feeding on the saltmarsh before disappearing down a small creek.

There were lots more BLACKBIRDS around the bird observatory as we walked past and we headed back along the beach to see if we could find any migrants. Overhead, there was the constant roar of an RAF Typhoon jet and along the beach we found a lone RINGED PLOVER, but apart from that it was quiet.

After getting back to the van we took a stroll along Beacon Lane and found more BLACKBIRDS plus smaller numbers of REDWING. A GOLDCREST fed in a Hawthorn and in a nearby garden we watched TREE and HOUSE SPARROWS plus GOLDFINCH, GREENFINCH and a brief female BRAMBLING.

We had a warm drink in the cafe before having lunch in the sunshine and then driving round to Kilnsea where a flock of DARK-BELLIED BRENT GEESE fed in a field until flushed by a SPARROWHAWK, which made them fly to a pool at the rear of the field. Luckily, they came back and gave lovely views in the sunshine.

It was then time to leave for our journey home and after dropping Ian off in Hull we carried on south, arriving back in Essex early evening after what had been a great tour!
Next
Previous