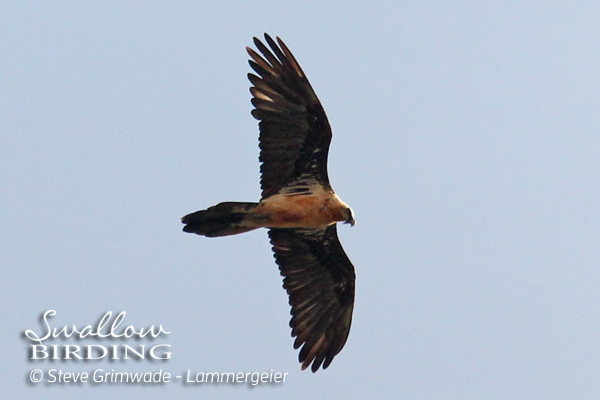 Thursday 13th November 2014
The group met mid-morning at Stansted Airport and once we had dropped off our luggage and negotiated security we had some time to relax before our flight down to Zaragoza.

We took off a few minutes behind schedule and after a couple of hours started our descent to Zaragoza after flying over the magnificent snow-capped peaks of the Pyrenees.

Once our luggage was retrieved, Steve sorted out the vehicle whilst the rest of the group were watching several SPOTLESS STARLINGS on the airport buildings. After loading up we made our way northwards around the ring-road. A CORMORANT was seen close to the River Ebro and further along towards Huesca, we saw three MARSH HARRIERS coming into roost close to a reed-fringed lake.

We eventually arrived in the small village of Loporzano and was greeted by Esther and shown to our rooms. We then had some time to unpack and shower before meeting for a pre-dinner drink and to complete our bird list.

Dinner was very welcome indeed with Cream of Courgette soup to start, followed by Braised Spanish Chicken with rice and salad and then Strawberry Custard Creme for dessert. This great food was washed down with a lovely local red wine!


Friday 14th November 2014
Overnight there had been heavy rain and we awoke to find it still raining, so after breakfast we headed southwards to an area of steppe which we hoped would provide good birds and weather to boot!

The journey southwards produced good numbers of COMMON BUZZARD, KESTREL and MARSH HARRIER, plus a single MERLIN and RED KITE. With the weather still dodgy, we climbed up onto a plateau and took a track which led us to a large area with an open vista.

Unfortunately the area had changed since we last visited it with much of the fields taken over for agriculture, although we did however spot quite a few SKYLARK and CALANDRA LARK flying over the fields.

With things a little quiet we retraced our steps but didn't get far, as close to the van was a female DARTFORD WARBLER, and at the bottom of the hill we watched a GREAT EGRET flypast.

It was then off to an area which is known for producing good numbers of birds and we were not disappointed, with a fine IBERIAN GREY SHRIKE perched atop a bush. Then we found a small flock of PIN-TAILED SANDGROUSE in a nearby field which gave good scope views.

The open, rocky fields were home to large numbers of CALANDRA LARK, with smaller numbers of SKYLARK and THEKLA LARK thrown in for good measure. Whilst scanning the area, two LITTLE BUSTARD were seen in flight after being flushed by four quad bikes and we tracked the birds until they landed in a distant field. Despite being such a long way away it was great to see these birds which are sadly declining in the area.

A few MARSH HARRIER were seen quartering the fields once the rain had eased and smaller numbers of CORN BUNTING, BLACK REDSTART and a few DARTFORD WARBLER took advantage of the break in the weather.

We moved on to another track where we watched a male MERLIN hunting across fields, and in the scrubby areas Andrew found a fine pair of CIRL BUNTING, which we were lucky to see alongside a pair of YELLOWHAMMER for good ID comparison.

By now we were getting peckish, so we headed off to our lunch spot where a BLACK-BELLIED SANDGROUSE flew over, as did a HOOPOE. In the small Almond grove nearby we had good scope views of small numbers of SERIN plus CHAFFINCHES.

With the weather improving we headed off to see a small flock of Great Bustard, but unfortunately the road was closed so it meant taking a long diversion.

Nevertheless we arrived at the spot and within a few minutes, had located a flock of 10 of these birds, which are very rare in Aragon, although they were very jumpy and flew to fields out of view. With diligent searching, we did find two more and viewed them in the scopes. Whilst watching these, David did well to find an adult female HEN HARRIER hunting low over the fields, before we took various tracks trying to pin down the bustards.

On doing so we found a stunning male HEN HARRIER, which at times was seen perched on the field. Eventually we found the GREAT BUSTARD flock but they flew off again so we decided to leave them in peace and move on to our last site of the day.

We arrived at a large lagoon which had good numbers of MALLARD, COOT, POCHARD and TEAL, plus the reed-fringed edge had up to 30 MARSH HARRIER using it for hunting zones.

It was a shame to leave the area but with the road diversion it would take longer to get back than expected. We arrived in Lopozano at around 6.30pm which gave us a chance to shower before dinner.

As is normal with our stays here, we certainly didn't go hungry and with our starter of Vegetable Risotto, followed by Salt Cod with a tomato sauce and Apple Cake for desert, we were well and truly spoilt.


Saturday 15th November 2014
We opted for an earlier breakfast to take advantage of what would hopefully be a drier, brighter day than Friday! We enjoyed a filling breakfast and were soon on the road, arriving at Los Mallos de Riglos in good time.

There were a few people about as we walked up through the village and on the impressive 400 metre conglomerate sandstone cliffs were a few hardy climbers making their way to the summits.

The scrub and bushes held a few SARDINIAN WARBLER plus a brief CIRL BUNTING and lots of ROBINS. ROCK DOVE made their home in the rocky crevices and a couple of GRIFFON VULTURE launched themselves into the air, one making a short flight and landing, sending a couple of large rocks crashing down to the ground.

A shower passed through the area and once the rain had cleared, we concentrated on scanning the cliff face and in doing so, found a small number of ROCK SPARROW and had a brief sighting of an ALPINE ACCENTOR, but best of all was a stunning WALLCREEPER!

This sought-after bird was seen flicking up and down the cliff face looking for insects and we all had good views as it went about its business. Whilst we were watching it others in the group were watching another one on an adjacent rock pillar.

CHOUGHS drifted overhead and in the scrub around the church we watched BLACKCAP, FIRECREST, BLACK REDSTART and best of all were a pair of ROCK BUNTING. Over the crags we found a flock of 24 COMMON CRANES as they circled on the thermals. As we walked through the town, we made a stop for coffee which we were treated to by Sandra and Francis!

With some of our targets achieved, we drove east noting good numbers of RED KITE and GRIFFON VULTURE. Arriving at the vulture feeding station we had lunch close to the van and despite a cold wind, we found large numbers of GRIFFON VULTURE soaring over the distant ridges.

Steve spotted a distant LAMMERGEIER but it promptly disappeared, only for Andrew to relocate it around 45 minutes later as it soared along a close ridge. Tracking it in the scope, we were delighted when it came into land on an open area nearby and we watched it pecking at a large bone.

Eventually, it took off with the bone and was seen circling and giving good views which were delightful. Other species here included 25 CHOUGH, RAVEN and on the distant ridges were 2 CHAMOIS and 3 WILD BOAR.

With some time remaining, we headed off to Loporzano cemetery, where despite seeing a couple of CRESTED LARK, PEREGRINE and a small number of ROCK SPARROW it was rather quiet indeed.

We opted for a return to base and a wander around the village, where we had much better views of both EUROPEAN and SPOTLESS STARLING, plus no doubt the same male PEREGRINE that was motoring over the village at some speed.

By the time we arrived back at the guesthouse, it was starting to rain so we headed for an early shower and to pack our bags for our homeward journey.

Again dinner was an absolute delight with a Bean Stew with rice to start, followed by Pork Tenderloin with roasted tomato, then by Chocolate Mousse for dessert.

We all went off to bed delighted after a great day's birding.


Sunday 16th November 2014
This morning we had a 7.30am breakfast and with slight reluctance we loaded up the vans and said our goodbyes to Esther after what had been a fantastic stay.

The day was bright and for our last few hours of birding, we headed up the scenic valley to the Embalse de Vadiello. During our journey we were treated to good views of a male HEN HARRIER that drifted across a valley, being mobbed by a KESTREL.

There was no one around when we arrived at the dam, so we took a walk through the tunnels and across the dam to an area giving us a wide vista of the area. Good numbers of
Pyrenean Saxifrage with their large rosettes were seen growing on the cliff face, and with some perseverance we found a large group of GRIFFON VULTURE plus a few RAVEN. A small party of CHOUGH flew over and in the scrub nearby we had good but brief views of a pair of FIRECREST.

We wandered back down and came across a few CRAG MARTIN flitting around taking advantage of the few flying insects that were around. Reaching the other side of the dam, Steve spotted a LAMMERGEIER and we watched an adult drift over, carrying nesting material before it vanished behind a peak.

With hopes of relocating it, we took a stroll through another tunnel which brought us out on a more sheltered side of the rock face. Although there was no sign of the Lammergeier, we did see a GOLDEN EAGLE drift over and begin circling which was good to see.

We then retraced our steps down to the car-park and whilst getting ready to head off, David shouted LAMMERGEIER and a different bird flew through at close range, giving us stunning views as it circled! Eventually it drifted off and then Geoff re-found it as it came over a close ridge!

With time getting on we drove back down the valley and went straight to the Castillo de Montearagon where the sun was shining, but a cool breeze was blowing. Almost immediately Andrew found a female BLACK WHEATEAR perched on the rocks, which was soon joined by a male and they gave good scope views. Then David found a LITTLE OWL sunning itself in a small cave and we found a male BLUE ROCK THRUSH, perched nicely on top of some rocks and giving superb views in the midday light!

It was then time to head down to Zaragoza and after making a quick stop at facilities, we arrived at Zaragoza Airport in good time, enabling us to repack our tripods and optical gear.

We took off a few minutes after schedule, but with a tail wind soon arrived back in England, sadly to wet and cold conditions. After getting our luggage, we said our goodbyes after what had been a superb tour with some fantastic birding moments, great food and accommodation plus a lovely group of people!
Next
Previous