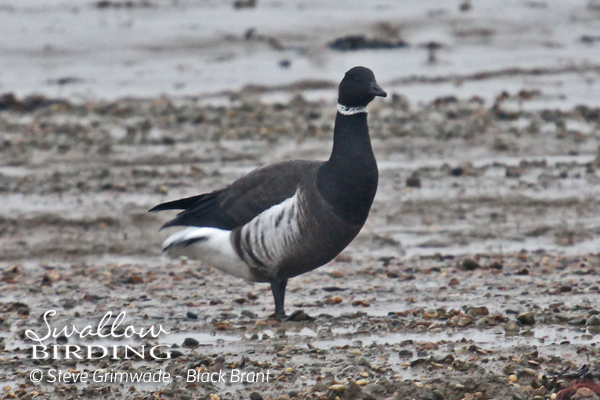 The weather forecast for the day wasn’t good to say the least but the trip got off to a superb start with an adult BLACK BRANT on the foreshore, along with a party of DARK-BELLIED BRENT GEESE.

We met up with our skipper Ray and headed out along the Salcott Channel which produced large numbers of GOLDEN PLOVER, KNOT, SHELDUCK and WIGEON. The latter scattered in all directions when a male HEN HARRIER drifted through the flock before heading off north. A female MARSH HARRIER was seen distantly over Old Hall Marshes RSPB reserve.

Small numbers of RED-BREASTED MERGANSER were seen as we returned out of Salcott Channel, unfortunately this coincided with the rain starting as we made our way into Tollesbury Channel.

PINTAIL, WIGEON and a few TEAL were roosting on the islands and as we neared the northernmost end of the channel a large number of waders gave us a superb flyby which included DUNLIN, KNOT, GREY PLOVER, BLACK-TAILED GODWIT, AVOCET and REDSHANK!

It was then onwards up the estuary which took us past the Radio Caroline boat moored in mid-river. Quite a few CORMORANTS took advantage of good numbers of fish in the river and could be seen in flocks.

As we neared Goldhanger we disturbed small numbers of GOLDENEYE and RED-BREASTED MERGANSER from the river along with at least three COMMON SCOTER. GREAT CRESTED GREBES were also seen in good numbers especially on the southern side of Osea Island.

With rain still falling constantly we opted to visit the north shore of the Blackwater where the water was sheltered. As we slowly chugged along we found two female/immature VELVET SCOTER which unfortunately flew off. Luckily we located them again and this time they were joined by another and they gave us a superb close flyby!

It was then time to head back to Mersea where we headed to the café to dry off! Despite the atrocious weather we had enjoyed seeing some great birds!
Next
Previous